Scratching just below the surface of the Western media’s headlines are stories carrying greater implications – stories the West believes are better left untold.

Beginning last week, headlines were overrun by a coordinated NATO-backed “Free Syrian Army” (FSA) offensive and an assassination bombing in Damascus, timed so close to each other and the UN Security Council vote on sanctions, the vote was pushed back a day. The attacks dubbed, “Operation Damascus Volcano” were clearly coordinated with the assassination bombing, designed for psychological impact, and when Syrians reacted with resolve, they quickly collapsed.

What went unreported until over a week later, were warnings of a potential NATO psychological warfare operation, matching hijacked satellite channels broadcasting false reports with an initially violent but ultimately futile militant offensive to stampede the Syrian government out of power on a wave of confusion and panic. It appears “Damascus Volcano” was just that operation.

The Western media would not cover this story until a week later, when security operations in Damascus concluded in the favor of the government and Syrian state television repeatedly made warnings to its viewers about further potential disinformation campaigns. Even then, reports were limited to “Tweets” by Western journalists and headlines in China’s English news.

Another big story was the UNSC resolution that was vetoed by Russia and China. The US and UK were quick to condemn the two nations, portraying them as the sole obstructions to resolving a conflict of the West’s own creation. But, what has gone largely unreported by the West, is the abstaining of Pakistan and South Africa – revealing wider opposition upon the Security Council than was portrayed, illustrating an erosion of Western influence its media houses would rather not discuss. Image: We all know that Russia and China vetoed the US-British backed UNSC resolution paving way for military intervention. What many do not know is that Pakistan and South Africa abstained in protest of the resolution.

There is also the Arab League which, speaking on behalf NATO, attempted one last chance to lure Syria into quick capitulation, offering sanctuary to Syria’s President Bashar al-Assad if only he would step down immediately. Ultimately Syria rejected these demands, illustrating its state institutions are not as near “crumbling” as the West insists.

What has gone largely unreported is the fact that the “Arab League’s” demands were made by the despotic governments of mainly Qatar and Saudi Arabia who are openly arming and paying the salaries of the FSA – essentially Gulf State mercenaries – to whom the League is asking Syria to surrender. Tunisia, under the US-installed President Moncef Marzouki had been the one specifically to offer President Assad “safe haven,”  further illustrating the absurdity of the Arab League’s proxy demands.

Image: Sadr City, Baghdad – the aftermath of Monday, July 23, 2012’s bombing & shooting spree, which Al Qaeda has taken responsibility for. It is designed specifically to spark off another destructive and divisive sectarian conflict – similar to the one the US, Israel, and Saudi Arabia are fueling in Iraq’s northern neighbor, Syria. The attack was carried out the same day Iraq rejected the Arab League’s (primarily Saudi Arabia and Qatar) demands that Syria’s president step down immediately.

Furthermore, Iraq wholly rejected the “Arab League” demands made on Monday, and almost immediately suffered the consequences as sectarian extremists under the Al Qaeda in Iraq (AQI) banner declared a new campaign of violence against the Iraqi government, beginning with a bombing and shooting spree leaving over a hundred dead in one day. It should be noted by readers that Al Qaeda was initially created by the United States and Saudi Arabia and has since been used to execute Western foreign policy up to and including both NATO’s recent operations in Libya, and now in subverting Syria.

Al Qaeda’s campaign most likely was inevitable, as Iraq drifts ever further away from US, Israeli, and Saudi influence, but its public condemnation of the Arab League’s demands verses Syria made for impeccable timing as AQI launched its most recent strike.

Turkey Crushes Own Rebels While Backing FSA Terrorists in Syria

Finally, reports of a Turkish military helicopter going down in the Hakkari province, just north of Iraq in operations against Kurdish rebels located there, indicates that another Turkish military operation against its own Kurdish population is underway – albeit very quietly. 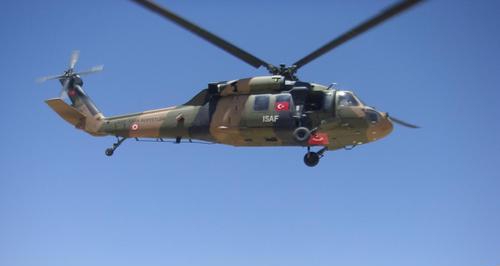 Image: A Turkish Blackhawk (reported as an S-70 Sikorsky) like the one pictured above was downed in the Hakarri province where security operations are targeting Kurdish rebels there, and across the border with northern Iraq.

Turkey has pursued an exceedingly hypocritical foreign policy as of late – arming, funding, training, and sheltering FSA terrorists in their efforts to undermine and destroy neighboring Syria, while carrying out a brutal campaign against Kurdish rebels rising up against the Turkish government. Turkey over the last 10 years has rolled tanks against Kurdish rebels, and strafed suspected rebel towns from the air, both within Turkey, and astonishingly deep within northern Iraq. The latest airstrikes being carried out as late as last week.

A recent deployment of military equipment along the Turkish-Syrian border by the Turkish military arrived in Mardin, the province facing Syria’s Kurdish dominated northeast, not the fighting taking place toward the West in Aleppo and Idlib. 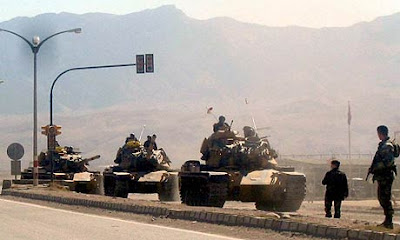 It would appear that Turkey is engaged in combat operations against its own population, while disingenuously berating the Syrian government over its security operations against the FSA. It would also appear that Turkey has repeatedly violated Iraqi airspace in recent weeks to pursue rebels over its borders – a scenario it and NATO have stated would constitute a war provocation should Syria pursue a similar policy.

Turkey is not only conducting security operations against its own Kurdish population, but against Kurds in Iraq, and is staging military equipment across the border from Syria’s Kurds. That this is not being covered in the Western media, demands further scrutiny and indicates that a wider conflict is already beginning – not because of Syria’s President Assad, but because of NATO and Turkey’s Prime Minister Erdogan .