One wonders what Syrians are thinking as “rebels” vowing to “free Syria” take the country down the same road to destruction as “rebels” in Libya. Libya, under Gaddafi a well run country whose oil revenues were shared with the Libyan people instead of monopolized by a princely class as in Saudi Arabia, now has no government and is in disarray with contending factions vying for power. 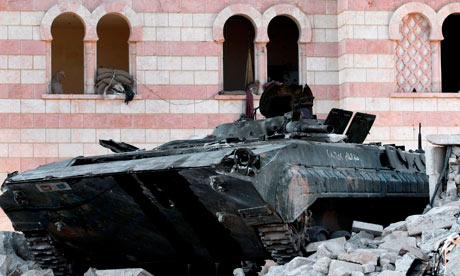 Just as no one knew who the Libyan “rebels” were, with elements of al Qaeda reportedly among them, no one knows who the Syrian “rebels” are, or indeed if they are even rebels (Antiwar.com). Some “rebels” appear to be bandit groups who seize the opportunity to loot and to rape and set themselves up as the governments of villages and towns. Others appear to be al Qaeda. (Antiwar.com)

The fact that the “rebels” are armed is an indication of interference from outside. There have been reports that Washington has ordered its Saudi and Bahrain puppet governments to supply the “rebels” with military weaponry. Some suspect that the explosion that killed the Syrian Defense Minister and the head of the government’s crisis operations was not the work of a suicide bomber but the work of a US drone or missile reminiscent of Washington’s failed attempts to murder Saddam Hussein. Regardless, Washington regarded the terror attack as a success, declaring that it showed the rebels were gaining “real momentum” and called on the Syrian government to respond to the attack by resigning. (reuters.com)

The following is from a leaked intelligence document describing a previous Western terrorist intervention in Syria just in case any reader is so naive as to think that “our government would never do that.”

“In order to facilitate the action of liberative (sic) forces, …a special effort should be made to eliminate certain key individuals. …[to] be accomplished early in the course of the uprising and intervention, …

Once a political decision has been reached to proceed with internal disturbances in Syria, CIA is prepared, and SIS (MI6) will attempt to mount minor sabotage and coup de main (sic) incidents within Syria, working through contacts with individuals. …Incidents should not be concentrated in Damascus …

Further: a “necessary degree of fear .. frontier incidents and (staged) border clashes”, would “provide a pretext for intervention… the CIA and SIS [MI6] should use … capabilities in both psychological and action fields to augment tension.” (Joint US-UK leaked Intelligence Document, London and Washington, 1957) (globalreasearch.ca)

Obama has not said why his government is so desperate to overthrow the Syrian government. The current president was an eye doctor in London who was brought back to Syria to replace his father, who had passed away, as president of the country. Washington is reticent about its real motives, which it masks with high-sounding humanitarian rhetoric, but Washington’s motives are transparent.

One motive is to get rid of the Russian naval base in Syria, thus depriving Russia of its only Mediterranean base.

A third motive is to destroy the unity of Syria with sectarian conflict, as Washington destroyed Libya and Iraq, and leave Syria to waring factions to dismember the country, thus removing another obstacle to Washington’s hegemony.

Syria, a secular Arab state, like Iraq was, is ruled by a political party composed of Alawis, more or less Shia Muslims. The Alawis comprise about 12% of the Syrian population and are regarded as heretics by the Sunni Muslims who comprise about 74% of the Syrian population. Thus the orchestrated “uprising” appeals to many Sunnis who see the opportunity to take over. (In Iraq it was a Sunni minority that ruled a Shia majority, and in Syria it is the opposite.)

The divisions among Arabs make Arabs vulnerable to Western interference and rule. The Sunni-Shia split makes it impossible for an Arab country to unite against an invader or for one Arab country to come to the aid of another. In 1990 the Shia Syrian government lined up with the US against the Sunni Iraq government in the First Iraq War. Neither Lawrence of Arabia, Nasser, nor Gaddafi succeeded in creating an Arab consciousness.

Washington’s cover for its violent overthrow of other governments is always moralistic verbiage. First the target is demonized, and then Washington’s naked aggression is described as “bringing freedom and democracy,” “overthrowing a brutal dictator,” “protecting women’s rights.” Any assortment of cant words and phrases seems to work.

Hillary Clinton has been especially strident in advocating the overthrow of the Syrian government. The silly woman even issued threats to Russia and China for daring to block Washington’s attempt to use a UN resolution as cover for invading Syria. Washington misrepresents the Syrian government’s resistance to being overthrown as a government conducting terror against its own people. But Washington had no condemnation for the terror attack, whether its own or that of a suicide bomber, that killed high-level Syrian government officials. Washington’s double standard prompted the Russian Foreign Minister, Sergey Lavrov, to accuse Washington of having “a sinister position.”

Indeed, Washington does. But what is surprising about Washington’s sinister position after Iraq, Afghanistan, Libya, Somalia, Yemen, and Pakistan? Undoubtedly, after Syria is overthrown, Washington will move on to Iran. Russia itself is already being surrounded by US missile bases, and the Russian government has a disloyal and traitorous political opposition financed by American money. China is confronting a rapid buildup of US air, naval, and troop bases in the Pacific. How long before China’s government has a disloyal opposition financed by Washington?

The hegemon is on the march, but what Syrian Sunnis see is a chance to overthrow the Alawite Shia. The Syrian Sunnis will ally with Washington despite the fact that Washington overthrew the Iraqi Sunnis. Few Arabs, it seems, mind being puppets of a foreign regime that hands out billions of dollars.

Washington loosely refers to Syrian President Assad as a “dictator” or “brutal dictator,” but obviously if Assad is a dictator he is not very effective in that role. Normally, dictators don’t permit an opposition to rise, much less arm itself. It would be more accurate to say that the ruling party is authoritarian, but the ruling party has introduced elements of democracy with the new constitution.

As Iraq has proved, Arab governments have to be authoritarian if their Sunni and Shia populations are not to be constantly engaged in civil war. Both Bush and Obama claim that Washington brought “freedom and democracy” to Iraq. However, the ongoing violence in Iraq is as intense or more intense than under the American occupation. Here are the reports for the last three days:

July 23: “A wave of bomb attacks and shootings in Baghdad and north of the capital has killed at least 107 people. At least 216 were wounded.”