While the New York Times publishes Goebbels-esque war propaganda pieces titled, “Assad, the Butcher,” presuming to know the details about an unconfirmed “massacre” the UN is just now in the beginning stages of investigating – a disturbing and very telling incident unfolded that is very much confirmed. British Channel 4’s Alex Thomson, one of the few Western journalists not only in Syria legally, but attempting to cover both sides of the conflict, was purposefully led by rebels into a trap designed to have him and his team killed by government troops. 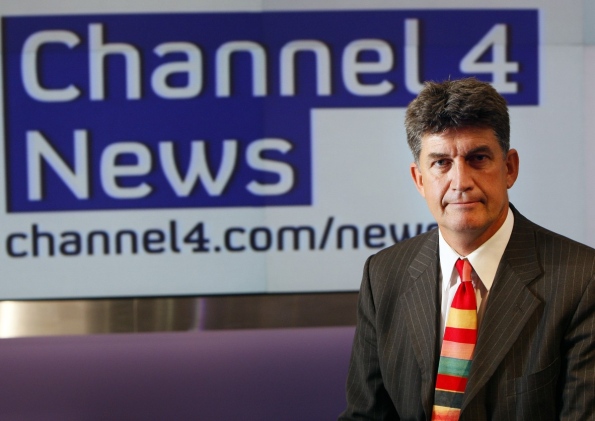 Image: UK’s Channel 4 News’ Alex Thomson narrowly escaped a trap set for him and his team in Syria, by rebels hoping to use his death as propaganda. Ironically, it would have been Thomson’s own countrymen and colleagues, particularly BBC, who would have maximized the effect of the rebels’ insidious plot had they succeeded. Killing journalists and carrying out manufactured atrocities, then blaming it on a targeted government is a pastime for Western media houses.

“Set up to be shot in Syria’s no man’s land?” featured on Thomson’s personal Channel 4 blog describes a tale of violence on both sides – very uncharacteristic of Western and particularly British media coverage. While BBC was busy posting fake pictures for their one-sided Houla Massacre coverage, Thomson was busy trying to interview belligerents on both sides of the Syrian conflict.

Thomson’s narrative describes what appears to be a bifurcation between “rebel” forces. On one hand, there are organized fighters that appear to solely committed to fighting the Syrian Army. On the other hand, there appears to be a more insidious “third party” involved, a third party implicated by Thomson as having intentionally led him and his team into a deadly trap. This is a narrative that corroborates statements made by the Syrian government itself, as well as independent geopolitical analysts from around the world – that there exists a substantiation third party, consisting of foreign mercenaries and sectarian extremists carrying out the bulk of the violence and atrocities.

“We decide to ask for an escort out the safe way we came in. Both sides, both checkpoints will remember our vehicle.

Suddenly four men in a black car beckon us to follow. We move out behind.

We are led another route. Led in fact, straight into a free-fire zone. Told by the Free Syrian Army to follow a road that was blocked off in the middle of no-man’s-land.

At that point there was the crack of a bullet and one of the slower three-point turns I’ve experienced. We screamed off into the nearest side-street for cover.
Another dead-end.

There was no option but to drive back out onto the sniping ground and floor it back to the road we’d been led in on.

Predictably the black car was there which had led us to the trap. They roared off as soon as we re-appeared.”

I’m quite clear the rebels deliberately set us up to be shot by the Syrian Army. Dead journos are bad for Damascus.”

Alex Thomson concluded his account by saying, “in a war where they slit the throats of toddlers back to the spine, what’s the big deal in sending a van full of journalists into the killing zone? It was nothing personal.”

The obvious question that comes to mind upon reading Thomson’s account, along with emerging evidence that the Western press willfully lied about the Houla Massacre and is attempting to do so again regarding killings in Hama, is that “if rebels are willing to try and kill foreign journalists for propaganda value – men and women merely trying to do their job, to share with the world the truth about unfolding events in Syria – just to blame the deaths on the Syrian government, why wouldn’t they kill men, women and children to blame on the Syrian government as well?”

Another pertinent question would be, “what if the rebels had succeeded in their insidious plan to have Thomson and his team killed? Would the Western press commit themselves to due diligence in ascertaining the truth surrounding the circumstances of their deaths? Or would headlines read, “BRITISH JOURNALISTS SLAUGHTERED BY ASSAD!”

It is above all ironic, that the West’s insidious leadership who long planned Syria’s division, destruction, and downfall, and the Western media that serves this agenda, are able to invoke so much genuine sympathy and concern for human life in people around the world, when they themselves lack any at all.