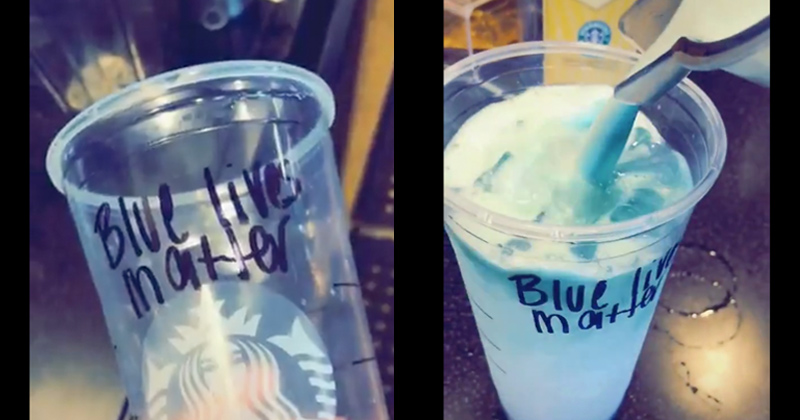 An employee at a Target in Indiana has been fired after filming a TikTok video in which he poured bleach into a drink meant for a cop.

In the TikTok video filmed in a Starbucks inside an Indianapolis Target, the employee brags about concocting the toxic “Blue Lives Matter” drink, though it’s unclear if it’s actually served to anyone.

“Hi guys, I updated my recipe for the Blue Lives Matter drinks,” the barista says, as the song, “All I want for Christmas is more dead cops,” plays in the background.

@Starbucks Is this acceptable to be poisoning people or even joking about poisoning people? Please take appropriate action and fire this gentleman! pic.twitter.com/spyzKVfsYW

“First we’re gonna start with bleach,” the barista says, pouring more than a half cup “All the way to the third line.”

In a separate pitcher he adds “more bleach,” and “a little blood of innocent black men,” he says, pouring an unidentified red ingredient into the mixture and finishing off the drink with a blue powder.

On Monday, Target announced they’d fired the employee, who was evidently worked for Target and not Starbucks.

Target also condemned the employee’s actions in a statement,

“This video is appalling and unacceptable,” said a Target spokesperson. “We don’t tolerate this behavior at Target, want all guests to be treated with respect and are terminating the team member who is responsible.”

“We also have rigorous food safety procedures in place, which this team member egregiously violated with this behavior. We’re deeply sorry for this disturbing video, which TikTok has removed based on the platform’s guidelines.”

The added the employee had not used actual bleach, and the drink was likely not served.

“We don’t believe this was served to a guest,” the Target spokesperson said. “After talking to the team member involved, we don’t believe actual bleach was used, only milk and water.”