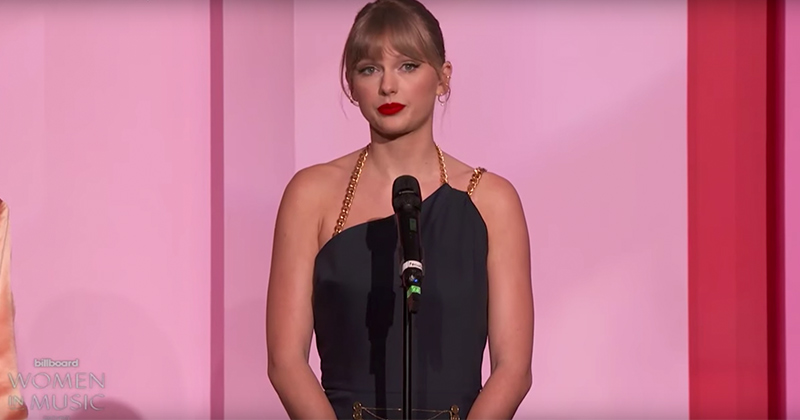 During Thursday’s Billboard Women in Music gala, Taylor Swift went off on “toxic male privilege,” the music industry as a whole, and even billionaire globalist George Soros.

“After I was denied the chance to purchase my music outright, my entire catalog was sold to Scooter Braun’s Ithaca Holdings in a deal that I’m told was funded by the Soros family, 23 Capital, and that Carlyle Group,” Swift told the audience.

She also took aim at Scooter Braun, who became the legal owner of her music when he purchased Scott Borchetta’s Big Machine Label Group earlier this year.

“This just happened to me without my approval, consultation, or consent,” Swift explained, adding that it felt like, “the unregulated world of private equity coming in and buying music as if it’s real estate—as if it’s an app or a shoe line.”

She then claimed Scooter never contacted her to discuss the acquisition of her work prior to the sale or even after it was announced.

“I’m fairly certain he knew exactly how I would feel about it, though, and let me just say that the definition of toxic male privilege in our industry is people saying ‘but he’s always been nice to me’ when I’m raising valid concerns about artists and their right to own their music,” Swift declared. “And of course he’s nice to you. If you’re in this room you have something he needs.”

If only Swift would call out Soros for his intentional destruction of entire economies, collaborating with Nazis or his funding of nearly ever anti-American group known to Earth.