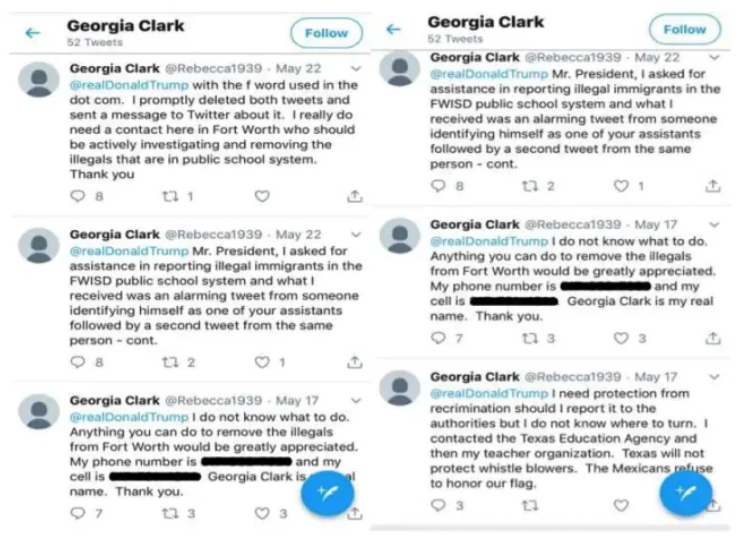 A high school teacher in Texas was fired Tuesday over some tweets she sent to President Trump, asking him to do something about the illegal immigrants in her school district.

The Fort Worth Independent School District Board of Trustees voted on Tuesday to terminate the contract of English language arts teacher Georgia Clark, who has worked for the district since 1998.

The Carter-Riverside High School teacher tweeted what she thought were private messages directed at President Trump last month, but the comments were public and sparked a huge controversy in the Fort Worth community.

“Mr. President, Fort Worth Independent School District is loaded with illegal students from Mexico. Carter-Riverside High School has been taken over by them. Drug dealers are on our campus and nothing was done to them,” one tweet read.

She continued, “I really do need a contact here in FW who should be actively investigating & removing illegals that are in the public school system.”

Clark also claimed school districts across the state are removing photos of illegal students to stop them from being identified by law enforcement.

The teacher says she “contacted the feds,” the Texas Education Agency and her teacher organization, but the calls for help were left unanswered.

A controversial 1982 Supreme Court ruling allows illegal immigrants to attend public schools under the Equal Protection Clause of the Constitution.

See the now-deleted tweets below: 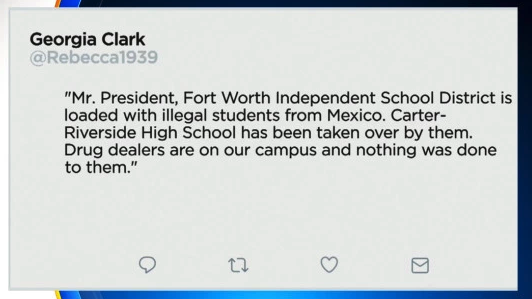 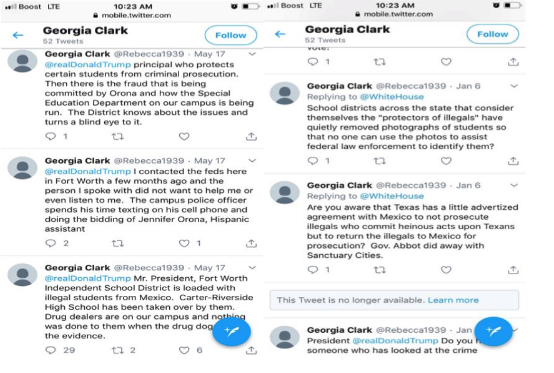 According to state law, Clark has 15 days to appeal the decision and will be paid while the process takes place.

The reaction from parents and students has been mixed, but the media is only focusing on those who are upset with the tweets.

A parent named Penny Clanton said, “Her comments were hurtful, irresponsible, misleading, and disrespectful to the students she is supposed to protect and educate.”

Another teacher in the district chimed in, saying, “Let’s get one thing straight, ma’am, no human is illegal.”

Parents said the comments were “threatening,” “hurtful,” “dangerous and harmful to the students,” and much more.

The following videos are mainstream media news reports on the story: