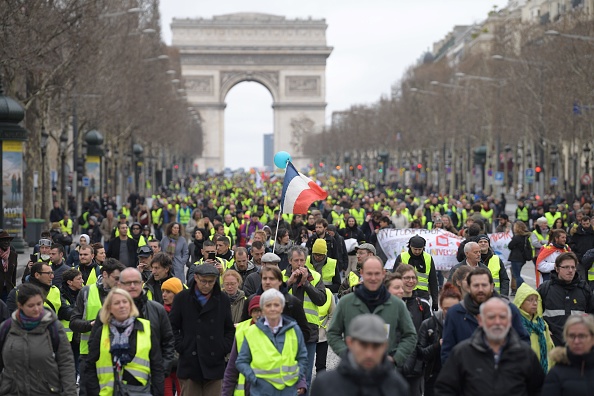 Yellow Vest protesters have taken to the streets of Paris for the 16th consecutive week. While some enjoyed a friendly chat with police officers, others faced tear gas after trying to break off from a pre-approved marching route.

Unlike previous demonstrations, Paris officials authorized a designated route for Saturday’s “Act 16” anti-government marchers – a span of road beginning at the Arc de Triomphe and ending at Place Denfert-Rochereau in the south of the city.

In contrast to the chaotic clashes with police during previous protests, photographs and videos reveal a largely peaceful, orderly demonstration.

Videos taken by an RT France reporter even showed Yellow Vests and French police chatting amiably, with one protester even offering a riot cop a flower.

Police, however, later used tear gas on demonstrators who attempted to defy the pre-approved protest route by marching down New York Avenue.

Similar marches are being held across France, but activists have expressed concern that the movement is losing momentum.

One Yellow Vest group on Facebook has called on demonstrators to return to the movement’s “spontaneous” roots with unsanctioned protests held at unauthorized locations.

The Yellow Vest movement began in November 2018 after French President Emmanuel Macron announced controversial tax hikes. Over 2,000 people have been arrested since the demonstrations began, and dozens of protesters have been injured during violent clashes with police.

Macron called for a “return to calm” on Friday, denouncing the “intolerable” violence that has resulted from the weeks of protests.

Progressivism has spread throughout our society and is now manifesting in many negative forms in people of all ages and genders. Owen takes your calls to explore what possible future may await if patriots don’t take a stand.