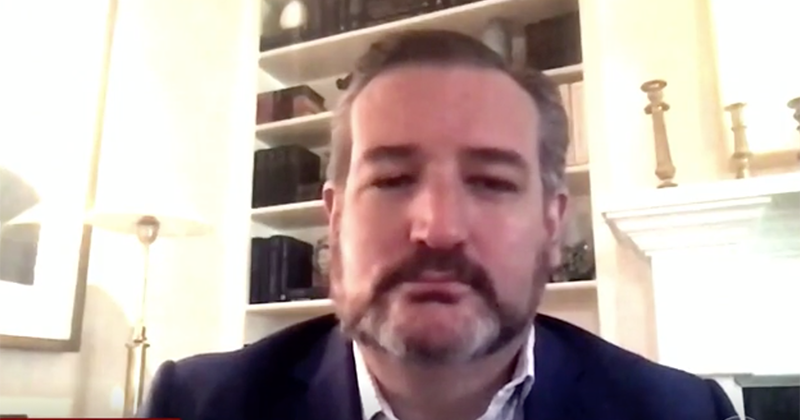 Sunday on CBS’s “Face the Nation,” Sen. Ted Cruz (R-TX) argued Speaker of the House Nancy Pelosi (D-CA) was using the coronavirus relief bills for “shoveling money to her friends.”

MARGARET BRENNAN: I do want to ask you about the business at hand, which, as we know from the White House and from Leader McConnell’s office, is this bill they plan to introduce tomorrow to provide another round of aid. You opposed it earlier this week. Are you on board now?

CRUZ: I- I am not. We have right now two simultaneous national crises. We have a global pandemic. It is serious. It is taking the lives of over 600,000 people. We need to do significantly more to fight the disease. At the same time, we have an absolute economic catastrophe. We have over 44 million Americans have lost their job, and we have got to get America back to work. Unfortunately, I just listened to your interview with Speaker Pelosi, her objectives are focused on neither of those. Her objectives are shoveling cash at the problem and shutting America down. And in particular, you look at the three trillion dollar bill she’s trying to push. It’s just shoveling money to her friends and not actually solving the problem. Our objective should be Americans want to get back to work. They want to be able to provide for their family.

CRUZ: The policy that Nancy Pelosi and the Democrats are pushing adds an additional $600 a week of federal money to unemployment. We have the unemployment system, the system we have had–

BRENNAN: Right, and McConnell and wants to take it down to 70% of prior wages.

CRUZ: Except, the problem is, for 68% of people receiving it right now, they are being paid more on unemployment than they made in their job. And I’ll tell you, I’ve spoken to small business owners all over the state of Texas who are trying to reopen and they’re calling their- their waiters and waitresses,–

BRENNAN: But you’re open to a lesser amount?

CRUZ: –would suspend the payroll tax, which would give it a- a pay raise to everyone in America who’s working. That actually gets people back to work.

BRENNAN: Well as the treasury secretary said this morning that you could have five, six, seven other bills come in along that include things like a payroll tax but this time, unemployment in particular is something that he said needs to be extended. And- and according to our latest CBS poll, it’s very popular. 74% of Republicans approve more stimulus and added benefits. 92% of Democrats. 82% of independents. So Republicans do have the burden of governing right now.

BRENNAN: Why aren’t you onboard with this?

CRUZ: I am on board with restarting the economy. What- what Democrats want to do- we’re 100 days out from the presidential elec- election. The only objective Democrats have is to defeat Donald Trump, and they’ve cynically decided the best way to defeat Donald Trump is shut down every business in America, shut down every school in America. You know, Nancy Pelosi talks about working men and women. What she’s proposing is keeping working men and women from working. And, you know, ironically, what she does have in her bill? She has a big tax cut for millionaires and billionaires in blue states.