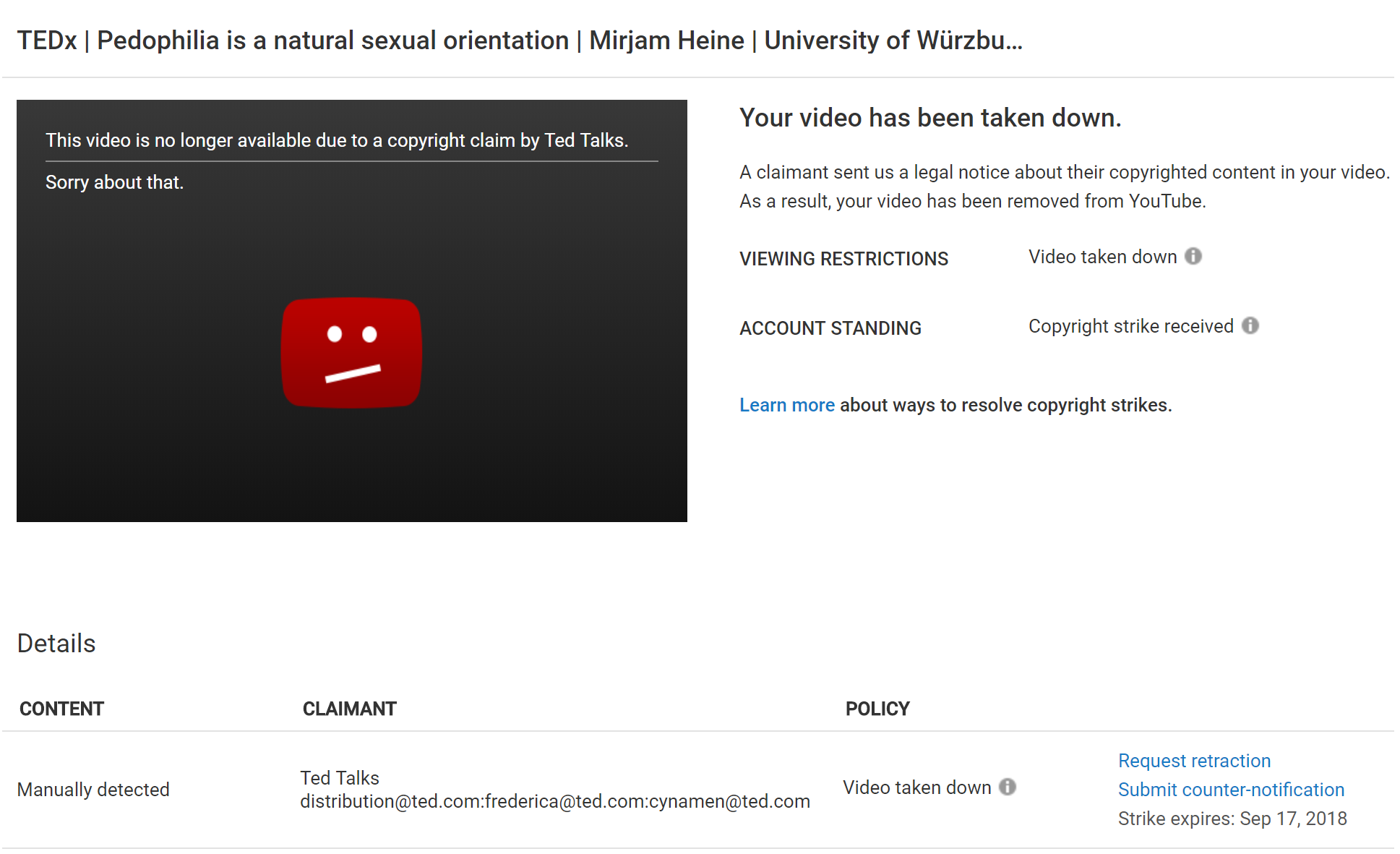 The TED organization distanced itself from one event Tuesday, which featured a German medical student at the University of Würzburg in a lecture entitled, “Why our perception of pedophilia has to change.”

In the independently organized event, which took place May 5, student Mirjam Heine discussed how pedophiles should be accepted by society, but must also be encouraged not to act on their sexual desires.

Using the story of “Jonas,” a pedophile she encountered only attracted to female children between ages 6 through 12, Heine attempts to draw a distinction between people who sexually abuse children and pedophiles who do not abuse children.

“Let me be very clear here: abusing children is wrong without any doubt, but a pedophile who doesn’t abuse children has done nothing wrong,” Heine says.

The speaker claims society’s exclusion and isolation of pedophiles may instead encourage them to commit child sex abuse.

“According to current research, pedophilia is an unchangeable sexual orientation just like, for example, heterosexuality. No one chooses to be a pedophile. No one can cease being one.”

“It is in our responsibility to reflect and to overcome our negative feelings about pedophiles and to treat them with the same respect we treat other people with.”

“We can make Jonas feel that he stays a valuable member of our society, although he’s a pedophile,” Heine says.

“We should accept that pedophiles are people who have not chosen their sexuality and who unlike most of us will never be able to live it out freely if they want to lead an upright life,” she adds.

A page at the TEDx event website contained a synopsis of Heine’s lecture: 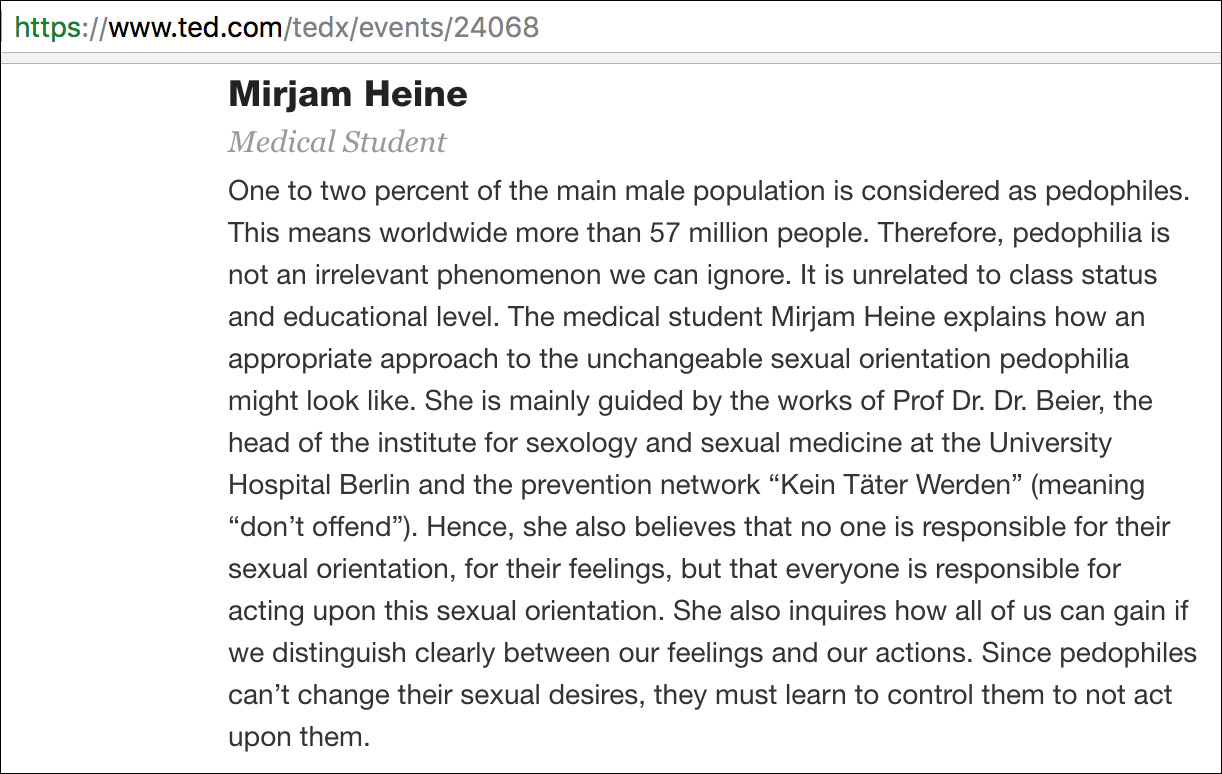 Distancing themselves from Heine’s content, TEDx Talks deleted their upload of the lecture and multiple Youtube re-uploads of the video, which now feature takedown notices stating they’re “no longer available due to a copyright claim by TED Talks.”

Infowars reached out to TED over the matter. We were directed to a TED Blog post claiming:

“An independently organized TEDx event recently posted, and subsequently removed, a talk from the TEDx YouTube channel that the event organizer had titled: ‘Why our perception of pedophilia has to change.'” 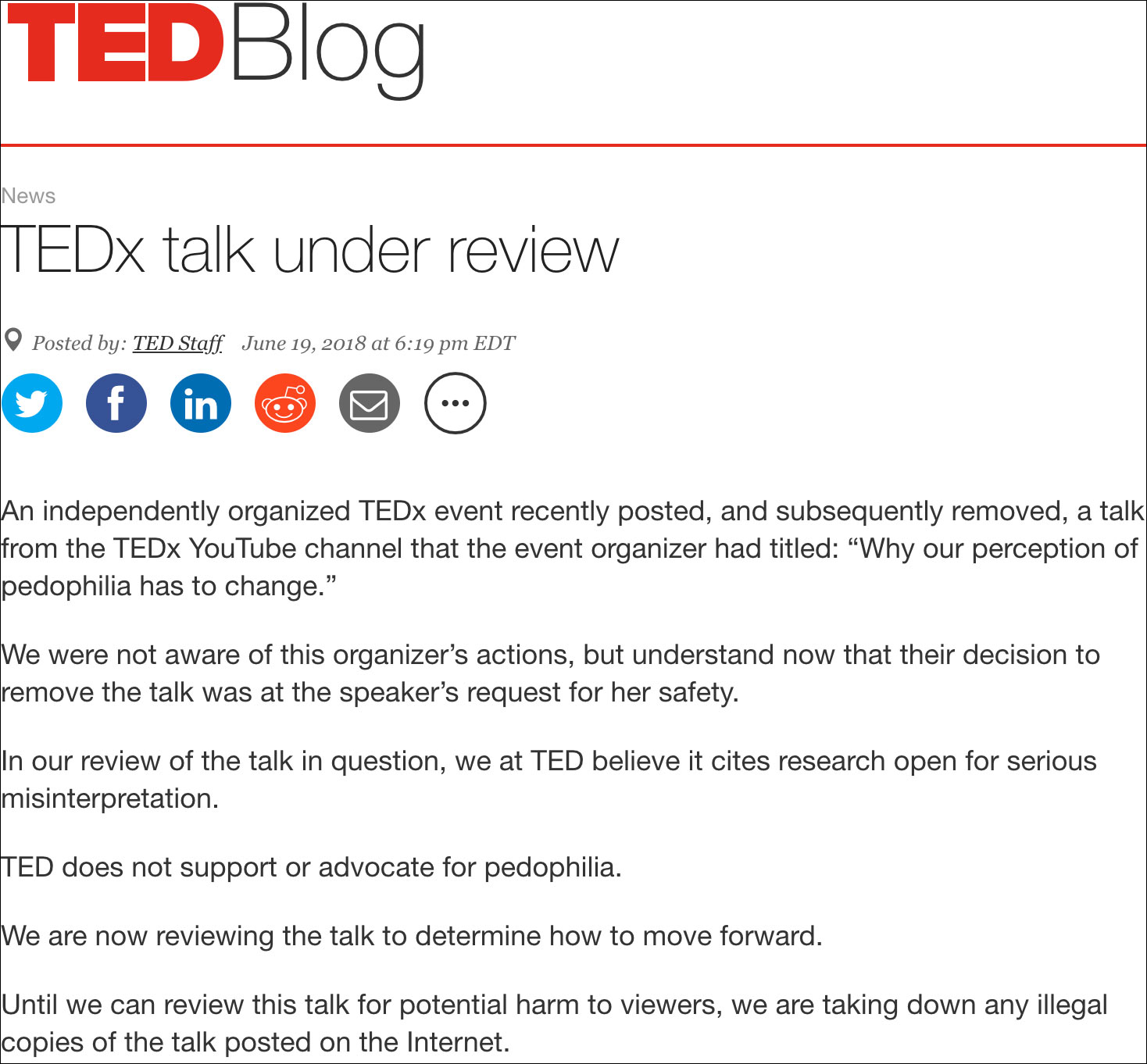 The blog post, further updated Wednesday, also indicates TED was “not made aware” the TEDx organizer deleted the video, but claimed the “decision to remove the talk [from Youtube] was at the speaker’s request for her safety.”

“In our review of the talk in question, we at TED believe it cites research open for serious misinterpretation,” the blog post reads.

“TED does not support or advocate for pedophilia.”

“We are now reviewing the talk to determine how to move forward.”

“Until we can review this talk for potential harm to viewers, we are taking down any illegal copies of the talk posted on the Internet.”

It’s unclear how re-uploads of the video are being deemed “illegal copies,” since TED posts videos under Creative Commons Licensing agreements, not to mention TED welcomes users to spread their content: “We encourage you to share TED Talks under the terms of our Creative Commons BY-NC-ND license,” which allows for “the copy and redistribute [of] the material in any medium or format.”

At a separate TEDxSittardGeleen 2018 event in the Netherlands, themed “Misbehaving Beautifully,” a lecture presented by psychologist and criminologist Madeleiene van der Bruggen in April also called on the public to “be mature about pedophilia.” 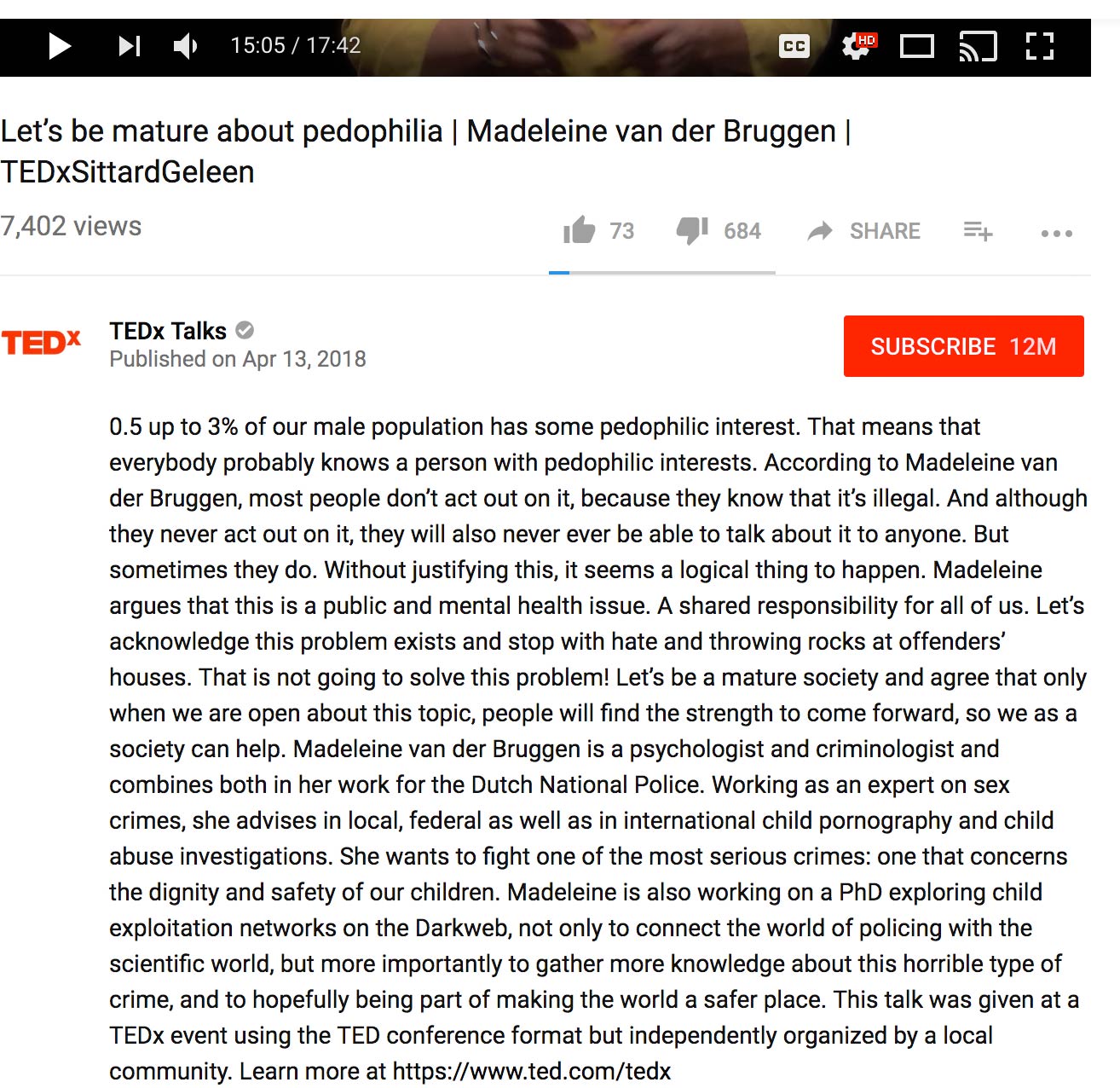 A transcript of a portion of van der Bruggen’s lecture appears below in which she urges societal acceptance of pedophiles – after which she says they will be more inclined to seek treatment:

“So how can we be open about the problem now? How can we break the taboo? Well first of all, let’s stop with hate, let’s stop with negative vibes in the media and let’s stop throwing rocks at [sex] offenders’ houses. Because it’s not going to take us anywhere. It’s never going to solve this problem. But rather please let’s be rational about this problem. Let’s talk about it let’s be open and let’s be a mature society. What if your son would approach you one day and would tell you that he’s struggling with pedophilic feelings? Would you beat him up, or would you want to help?”

The TEDx program is described as “created in the spirit of TED’s mission, ‘ideas worth spreading.’ It supports independent organizers who want to create a TED-like event in their own community.”

News of the pedophile acceptance lectures comes as Congress moves to pass legislation known as the “Creeper Act” banning child sex doll importation and transportation in the United States due to the theory that the robots “reinforce, normalize, and encourage pedophilic behavior, potentially putting more children at risk to harm,” according to the bill’s sponsor Congressman Dan Donovan.