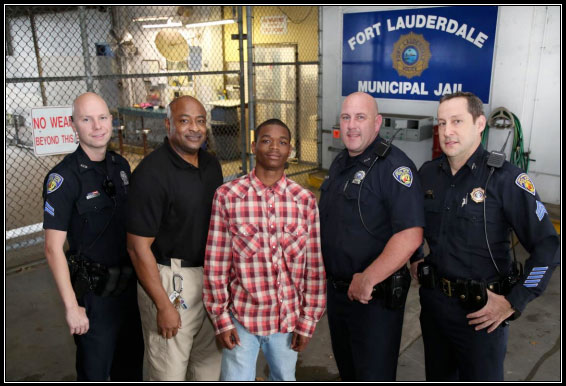 A Florida teen charged with violating probation ended up saving the life of his booking officer in an unusual, but heroic rescue attempt.

Police in Fort Lauderdale are heralding teenager Jamal Rutledge as a hero for not letting Officer Franklin Foulks die, after he collapsed on the floor suffering from an apparent heart attack.

Back in September, Foulks was processing paperwork in the booking office when he suddenly fell onto the floor, a video released by FLPD shows.

Rutledge, being the only other person in the room, sprang into action still handcuffed and cried out to officers as he kicked the office security fence.

“Sergeant Todd Bunin was walking near the booking area, heard Rutledge and noticed Officer Foulks was semiconscious lying on the ground,” says a press release from the FLPD.

Responding officers were able to save Foulks’ life by removing his equipment and ripping open his shirt in order to use a defibrillator to stimulate Foulks’ heart.

“Broward Health Medical Staff noted that Rutledge’s actions and the quick response of these officers were largely responsible for Officer Foulks surviving this medical episode,” the press release says.

Rutledge, Officer Bunin, Officer Robert Norvis and Officer Raymand Ketchmark will be honored by the City of Fort Lauderdale at an awards ceremony to be held on January 21.