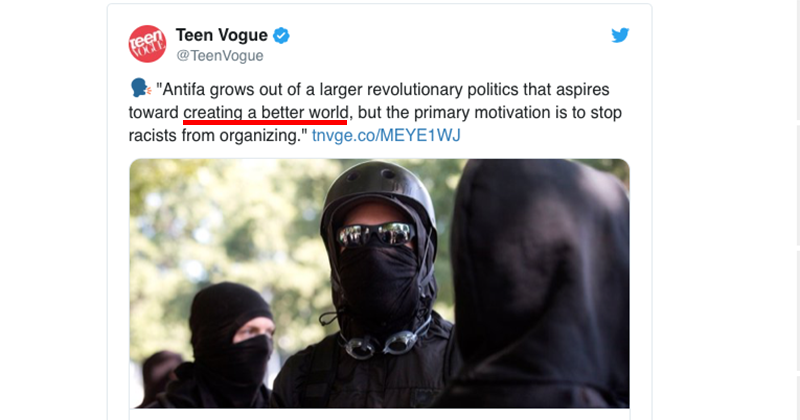 “Antifa grows out of a larger revolutionary politics that aspires toward creating a better world, but the primary motivation is to stop racists from organizing,” a tweet from the publication reads.

🗣 "Antifa grows out of a larger revolutionary politics that aspires toward creating a better world, but the primary motivation is to stop racists from organizing." https://t.co/ShS2RPfDN2

Well, that’s that cleared up then.

But hang on, why are legitimate protesters confronting and opposing Antifa chicken necks?

But wait, blue check marks on here told me Antifa are literally the same as WW2 troops who stormed the beaches of Normandy. https://t.co/3EnzMYyVTL

Teen Vogue’s assertion is based on a three year old interview with then Dartmouth College ‘historian’ Mark Bray, a known Antifa sympathiser who constantly tries to defend the organisation, and has even donated the profits of a book he wrote to Antifa.

“The vast majority of what they do does not entail any physical confrontation,” Bray claimed in the interview.

Bray also claimed that most of what Antifa does is “researching white supremacists and neo-Nazis”.

Not smashing up black-owned small businesses then?

Believe it or not, Bray is still at it though.

In an op-ed for The Washington Post Monday, Bray, who now lectures at Rutgers, described that the looting and rioting as “‘violent’ protest tactics.” with extra quotation marks around ‘violent’.

Bray suggests that Antifa protesters are engaging in “social revolutionary self-defense” against police, further claiming that the violence is merely “the targeted destruction of police and capitalist property”.

Refusing to call the rioting what it is, Bray described it as “a variety of forms of resistance during this dramatic rebellion.”

Someone more qualified than Bray to describe exactly what Antifa really is is Former Antifa member Gabriel Nadales, who now  admits that what the organisation does is the “very definition of domestic terrorism.”