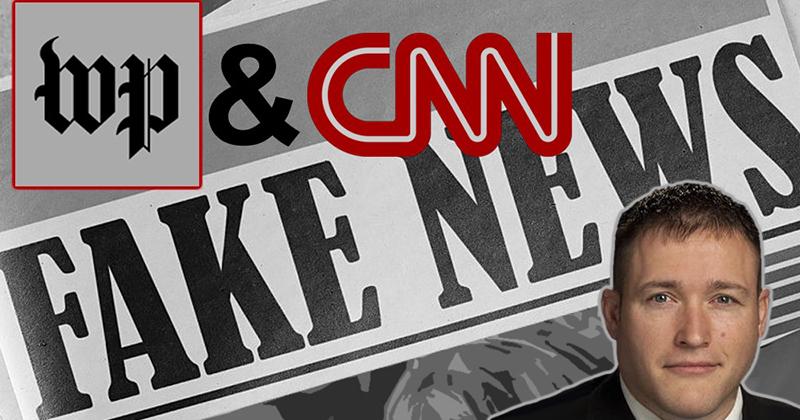 In a move that is sure to please President Trump, a State Representative in Tennessee has introduced legislation that would officially designate CNN, as well as The Washington Post, as fake news.

Republican Rep. Micah Van Huss filed the bill Wednesday, with the summary describing it as “A RESOLUTION to recognize CNN and The Washington Post as fake news and condemn them for denigrating our citizens.”

Taking to social media, Van Huss, a former Marine who served tours in Iraq and Afghanistan, declared “I’ve filed HJR 779 on behalf of a constituency that’s tired of fake news and Republicans who don’t fight.”

The State of Tennessee recognizes CNN and The Washington Post as fake news and part of the media wing of the Democrat Party.

I've filed HJR 779 on behalf of a constituency that's tired of fake news and Republicans who don't fight.

The legislation insists that The Washington Post and CNN have drawn a “line between Trump opponents and Trump supporters” by describing Trump voters as “cultists.”

The bill describes a specific instance where a CNN talking head “suggested that Trump supporters belong to a cult and that our president is using mind control.”

Infowars reported on the segment, aired last November on CNN, where Brian Stelter brought on ‘cult expert’, Steven Hassan, author of a book titled The Cult of Trump.

The pair urged viewers that the President is a ‘pathological liar’, and displays ‘the characteristics of destructive cult leader’.

They further suggested that ‘mind controlled’ Trump supporters need to be ‘deprogrammed’ and broken out of their ‘bubbles’.

“WHEREAS, it is fascinating to see this latest ‘cult-of-Trump’ meme coming from the left, because they are the true masters of deploying mobs to demand total conformity and compliance with their agenda; and WHEREAS, any thoughtful observer can see the cult-of-Trump meme as a classic case of psychological projection; after all, accusing someone’s perceived opponent of exactly what one intends to do is a very old tactic; and WHEREAS, the mainstream media is in a panic because President Trump has opened the eyes of many average Americans who are tired of politics as usual.”

The crux of the legislation argues that all of this “oversimplifies the way people think and feel about their own beliefs and those on the other side of that line.”

The bill reasons that therefore the media outlets pushing this agenda should be recognised as “fake news and part of the media wing of the Democratic Party.”

“BE IT FURTHER RESOLVED, that we condemn them for denigrating our citizens and implying that they are weak-minded followers instead of people exercising their rights that our veterans paid for with their blood,” the bill asserts.