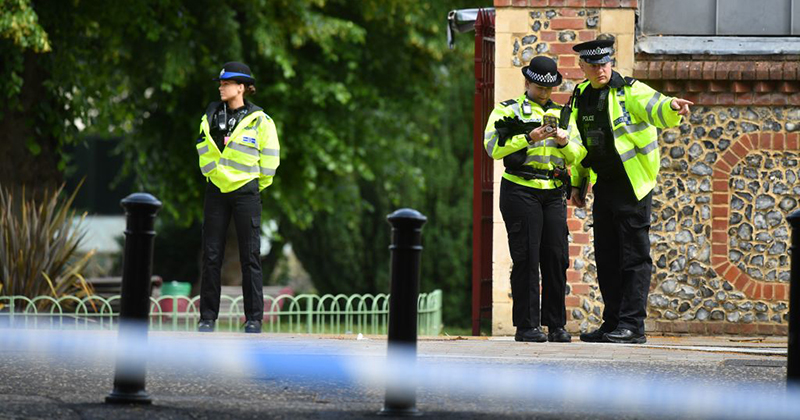 A knife attack in Reading which killed three people and left three others seriously injured has today been declared a ‘terrorist incident’.

Counter terrorism police will now take over the investigation.

It comes after counter-terrorism officers were called in to help detectives following the attack, which took place in Forbury Gardens, Reading, yesterday at around 7pm.

Today footage emerged which shows a man being detained by officers in the middle of a street following the frenzied stabbing attack in the park, which is at the centre of the Berkshire town.

Witnesses said the attacker targeted a group of middle-aged men ‘sitting drinking beer’ and systematically stabbed them ‘in the neck and under the arms’.

The injured victims were last night understood to be in a critical condition at the Royal Berkshire Hospital.

The suspect, 25, was arrested at the scene by a hero lone police sergeant who rugby-tackled him to the floor.

Today police union chiefs praised the bravery of officers who ‘who ran towards danger with the sole thought of protecting the public we serve’.

Meanwhile, despite the presence of counter-terrorism officers and early reports it was being treated as terror-related police said last night they did not believe it was terror-related.