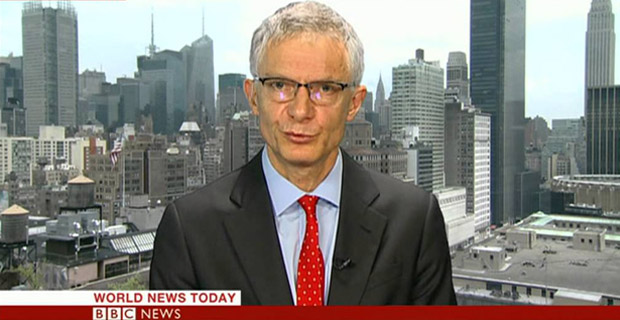 Cressida Dick, the Metropolitan Police’s assistant commissioner and head of specialist operations, told the Daily Mail Britain will experience increased terrorism for “many years” as a result of young British men participating in the Syrian war.

“I’m afraid I believe that we will be living with the consequences of Syria — from a terrorist point of view, let alone the world, geopolitical consequences — for many, many, many years to come,” Dick told the BBC Radio 4 over the weekend.

The Daily Mail cites Richard Barrett, a former head of counter-terrorism at MI6, who estimated “possibly up to 300 people have come back to the UK” since the start of the West’s proxy war in Syria. He said intelligence services are confronted with an “impossible” task in tracking them.

Barrett said the war in Syria funded and supported by the United States, Saudi Arabia, Qatar and Turkey, with U.S. military trained terrorists “is likely to be an incubator for a new generation of terrorists.” He estimated that more than 12,000 foreign mercenaries have traveled to Syria since the United States and its partners launched the war against the al-Assad government in Damascus.

“That is more than the 10,000 who went to Afghanistan during the decade-long [CIA fomented] jihad against Russian occupation,” The Independent reports. “One in four foreign fighters in Syria is from the West – part of a global phenomenon, with fighters from more than 80 countries represented on the battlefield.”

“With this whole business in Syria, although there is no linear projection from foreign fighters to domestic terrorists, it’s inevitable that a number” pose a terrorist threat, Barrett said.

The report does not mention the role British intelligence played in creating and fomenting terrorism.

As documented by Jean-Charles Brisard and Guillaume Dasquié, authors of The Forbidden Truth, in 1996 British intelligence paid al-Qaeda around $160,00 to fund an assassination plot against Libyan leader Mu’ammar al-Qadhafi. The British press was banned from discussing the case.

A member of the group, Anas al-Liby, was given political asylum in Britain. He lived there until May 2000 despite being an important al-Qaeda figure who would later be implicated in the alleged al-Qaeda bombings of two U.S. embassies in Africa.

In the late 1990s British intelligence recruited, groomed and protected a number of terrorist figures, including Abu Qatada. The radical imam told MI5 agents he exercised “powerful, spiritual influence over the Algerian community in London,” said he would look after the interests of the British state, and “would not bite the hand that fed him.”

Qatada would later figure as a key figure in terror. “The authorities said that a number of people arrested in connection with terrorism had described Abu Qatada’s influence. Richard Reid, the would-be mid-Atlantic shoe bomber, and Zacarias Moussaoui, both jailed for involvement in terrorism, are said to have sought religious advice from him. The cleric’s sermons were found in a flat in the German city of Hamburg used by some of those involved in 9/11,” the BBC reported.

A friend of Qatada’s, Bisher al-Rawi, would later become a key operative for British intelligence. He acted as a go-between for Qatada and MI5, The Independent reported in March, 2006.

Another important figure on the “Londonistan” scene was Abu Hamza al-Masri, the imam presiding over the infamous Finesbury Park mosque, described as “a first port of call, a meeting place and a haven for terror suspects arriving and operating in the UK,” including Richard Reid and Zacarias Moussaoui. “Hamza, as the imam of the mosque and its central figure, wielded a powerful influence over those who passed through its doors,” The Independent reported.

ISIS recruits Britons and other foreigners.

Hamza began working for British intelligence and police in 1997. He informed on fellow Muslims and was granted favors by MI5, including the release of suspected terrorists. Hamza told his aides he was “beyond the reach of British law,” according to authors Sean O’Neill Daniel McGrory (The Suicide Factory). An admission “that Abu Hamza and his followers were using [Britain] to raise funds to finance terrorism overseas did not seem to cause a blip on the MI5 agent’s radar,” O’Neill and McGrory write.

In 1999 Hamza would be implicated in the kidnapping and murder of Western tourists in Yemen. He would tell police he was following the Koran and would be released. The police returned to Hamza audio tapes “packed with the usual messages of intolerance and hatred, and culminating in exhortations to kill the enemies of Islam.”

His Finsbury Park mosque sermons were attended by alleged 9/11 hijackers Mohammed Sidique Khan and Shehzad Tanweer. Haroon Rashid Aswat, a top aide to Abu Hamza, would later be singled out as the mastermind of the London 7/7 bombings. Aswat is also suspected of working with British intelligence.

Another leading imam, Omar Bakri Mohammed, who collaborated with Osama bin Laden, also worked for British intelligence. “The British government knows who we are. MI5 has interrogated us many times. I think now we have something called public immunity,” Bakri admitted in 2001. Like many jihadists, the Syrian born imam was connected to the Muslim Brotherhood, a documented British (and later CIA) intelligence asset.

Before further clamping down on civil liberties in Britain officials should examine the role played by their intelligence agencies in promoting and fomenting terrorism. If, as claimed, a large number of terrorists are expected to return from Syria and pose a domestic terror threat, the government needs to take a closer look at who is behind the jihadist mercenaries in Syria (and now Iraq).

The obvious connection between British intelligence, the CIA, Pakistani, Saudi, Qatari and Turkish intelligence will not, of course, be examined in any effort to prevent terrorist attacks in the UK.

British intelligence is directly responsible for handling and protecting terrorists (including IRA terrorists). This has been reported by the country’s mainstream media, as noted above, but British officialdom and law enforcement assiduously avoid making a connection as do their counterparts in the United States.