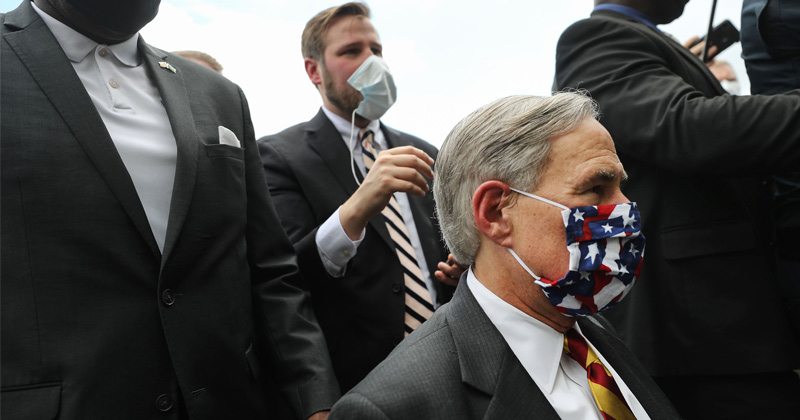 …so that no one can buy or sell unless he has the mark, that is, the name of the beast or the number of its name.

Now change a single letter in that sentence (an r for an s) and you’ll basically have the new facemask requirement green-lighted by Gov. Abbott which is now enacted in major Texas cities:

Right after Calif. Gov. Newsom and other blue states started mandating facemasks in public, Gov. Abbott – who apparently thinks California is now the model for Texas – decided it was okay for Democratic cities to demand people wear face masks as long as they force businesses to require customers to do so.

According to a local TV station:

When asked about the new mandates, Abbott responded that in his executive order he protected each individual’s right to not use a mask, however, he did allow local governments to enforce safety standards on businesses.

“Individual liberty is important here. We need to make sure that unlike what happened in Dallas county, individuals are not arrested and put behind bars simply because they might not be following some mandate.”

But it’s okay for governments to force grocery stores to deny food and household supplies to individuals for not wearing a mask, according to Abbott.

Regardless of Gov. Abbott’s mental gymnastics here, the end result is still the same, and forcing restrictions on businesses already struggling to survive is a typical Democratic Party move.

Proving that point, once Abbott capitulated, Democratic leaders in major Texas cities almost immediately ordered that businesses open to the public must require “all employees or visitors to the commercial entity’s business premises or other facilities wear face coverings.”

And, as expected, left-leaning publications STILL attacked Abbott even after his capitulation.

“By quashing local officials’ mask mandates only to later let them reinstitute mandates anyway in a slightly different form, Abbott is trying to have it many different ways,” Texas Monthly quipped.

It’s a political capitulation in which Abbott has little to gain but a lot to lose by alienating his base who are already pissed at how urban Texas is looking a lot like liberal California.

Wearing a facemask comes at the risk of creating “serious health risks to the wearer,” according to a neurosurgeon who pointed out there’s little to no scientific evidence that wearing a facemask has a major effect against Covid-19:

As for the scientific support for the use of face mask, a recent careful examination of the literature, in which 17 of the best studies were analyzed, concluded that, “None of the studies established a conclusive relationship between mask/respirator use and protection against influenza infection.” Keep in mind, no studies have been done to demonstrate that either a cloth mask or the N95 mask has any effect on transmission of the COVID-19 virus. Any recommendations, therefore, have to be based on studies of influenza virus transmission. And, as you have seen, there is no conclusive evidence of their efficiency in controlling flu virus transmission.

He also pointed out that wearing facemasks for hours can cause headaches and other health issues as the masks restrict normal breathing – and low oxygen “is associated with an impairment in immunity:”

In one such study, researchers surveyed 212 healthcare workers (47 males and 165 females) asking about presence of headaches with N95 mask use, duration of the headaches, type of headaches and if the person had preexisting headaches.

They found that about a third of the workers developed headaches with use of the mask, most had preexisting headaches that were worsened by the mask wearing, and 60% required pain medications for relief. As to the cause of the headaches, while straps and pressure from the mask could be causative, the bulk of the evidence points toward hypoxia and/or hypercapnia as the cause. That is, a reduction in blood oxygenation (hypoxia) or an elevation in blood C02 (hypercapnia). It is known that the N95 mask, if worn for hours, can reduce blood oxygenation as much as 20%, which can lead to a loss of consciousness…

The importance of these findings is that a drop in oxygen levels (hypoxia) is associated with an impairment in immunity.