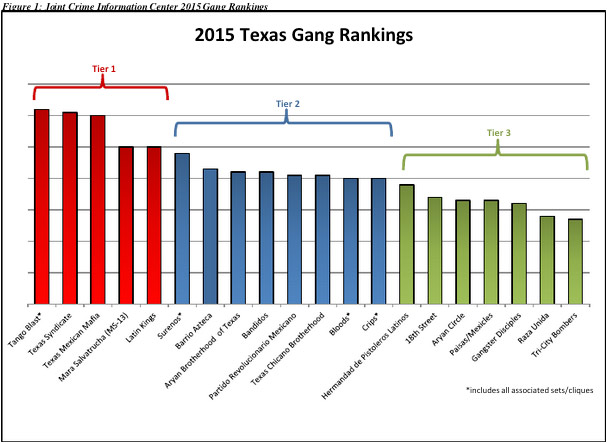 The State of Texas has upgraded the notorious Central American gang Mara Salvatrucha, otherwise known as MS-13, to a “Tier 1” level threat, according to a recent report from the Department of Public Safety.

The upgrade coincides with a sudden influx of illegal immigrants into the US, a surge particularly impacting the southern state which shares its extensive border with Mexico.

Texas’ Gang Threat Assessment “serves as the annual evaluation of the gang threat” and “provides a reliable overview of gang activity,” the report notes.

This year’s assessment, released last week, reveals how MS-13 has seen a steady increase in membership, a startling trend given the group’s ultra-violent nature.

“The threat from Mara Salvatrucha (MS-13) has increased since last year, resulting in the gang now being ranked in the Tier 1 category,” the assessment says. “MS-13 is a violent transnational gang whose presence in Texas is growing.”

The report links the rise of MS-13 directly to the 2014 border influx, which saw huge crowds of people from Honduras, El Salvador and Guatemala, as well as other nations, flood the US.

“In 2014, Texas experienced a dramatic spike in illegal aliens crossing into the United States from Mexico and Central America,” the report states. “Among those who illegally cross the Texas-Mexico border are gang members and associates, including those associated with large transnational gangs such as Mara Salvatrucha (MS-13).” 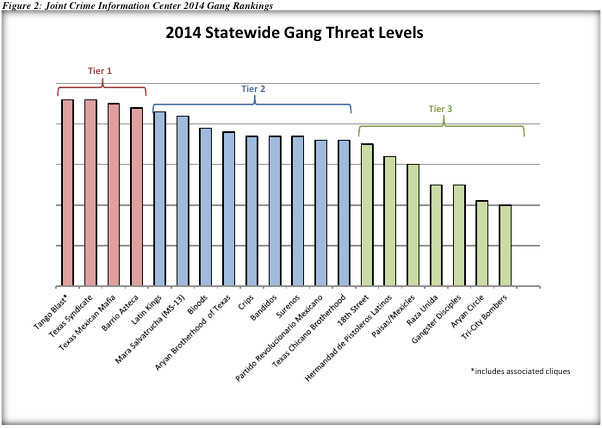 • On September 15, 2014, the mutilated body of a 14-year-old middle school student was discovered in the woods near Houston after he was murdered with a machete. Initial information from the investigation indicates the victim was a U.S. citizen and an MS-13 member who was murdered after trying to leave the gang. In October 2014, a 14-year-old and three adult males were arrested and charged with murder in this case. The adult males are from El Salvador, and at least two are documented MS-13 gang members.

• In mid-August 2014, a 29-year-old 18th Street gang member was stabbed to death in Houston by a 16-year-old El Salvadoran member of MS-13. The victim suffered multiple stab wounds outside of a bar and was discovered a few days later in a bayou. According to investigators, the juvenile suspect revealed he illegally crossed into the U.S. in March 2014.

Local police on the border say they’re taking the report seriously and are vigilantly monitoring their towns for any signs of gang activity. MS-13 members can typically be spotted by an excessive amount of tattoos, most notably on their faces, which often prominently feature the number “13.”

“In Laredo, they stick out like a sore thumb,” Laredo Police Department Investigator Joe Baeza told KGNS news. “It’s kind of hard to miss a guy that has a number 13 on their forehead and mistake him just for a guy who is a big fan of tattoos and the number 13.”

Other Tier 1 level gangs in the state and their estimated memberships include the Texas Mexican Mafia (~4,700 members), Tango Blast and Tango cliques (~15,000 members), and the Texas Syndicate (~3,400 members). Current estimates put MS-13 membership at around 800 members spread throughout the state.

But MS-13 crimes aren’t limited to the state of Texas. Last year, Infowars documented the arrest of six illegal alien gang members in the northeastern state of Maryland, accused of beating and stabbing a homeless man to death.

Infowars has also documented how MS-13 and other violent gangs are actively recruiting new members who arrive in the US, capitalizing off the immigrant surge by swelling their ranks.

Tier 1 gangs, according to the assessment, “pose the greatest gang threat to Texas due to their relationships with Mexican cartels, high levels of transnational criminal activity, level of violence, and overall statewide presence.”