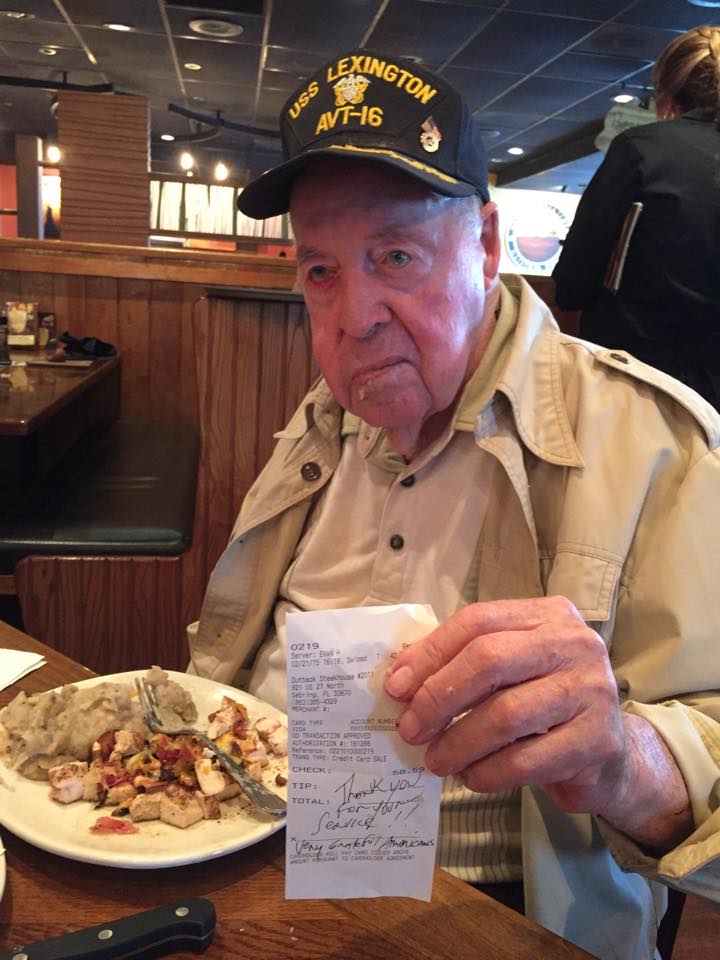 The family of a naval veteran was pleasantly surprised after the bill for a recent meal came back paid in full.

Upon completion of the meal, Bob’s son, also named Bob, says their waiter informed them that another customer had picked up the tab.

“Thank you for your service! -Very Grateful Americans,” reads a message written to Nieman by the anonymous patrons on a copy of their receipt.

“I wheeled my dad in & sat him down as I usually do,” the younger Bob described in a statement to Opposing Views.

“I noticed this 1 couple across from us watching [and] 10 minutes later they were gone. Thinking no more about it we started offing our food with the waiter as we were doing so he said to all of us, ‘Don’t Worry about the bill it’s already been taken [care] of because of this man service to our country.’ My dad was at the time wearing his Lexington Hat like he always does started beaming from ear to ear. My mom asked who did this & the waiter said, ‘Don’t worry they already left but they wanted to make sure you all were taken care of.’ Me being the ex-cop I am had to know and pressed him some more. ‘It wasn’t the couple sitting at that table?’ I asked, ‘the couple I noticed earlier?’ He told me yes, it was…how did I know? ‘Just a good guess, I said.'”

Nieman served as plankowner on the USS Lexington CV 16 during the second World War “and was taken off by a medical ship in 1944 when he was the only surviving member of his gun crew that was not killed by a Kamikaze that hit his gun turret,” according to Nieman’s son, who also provided photos of his father.