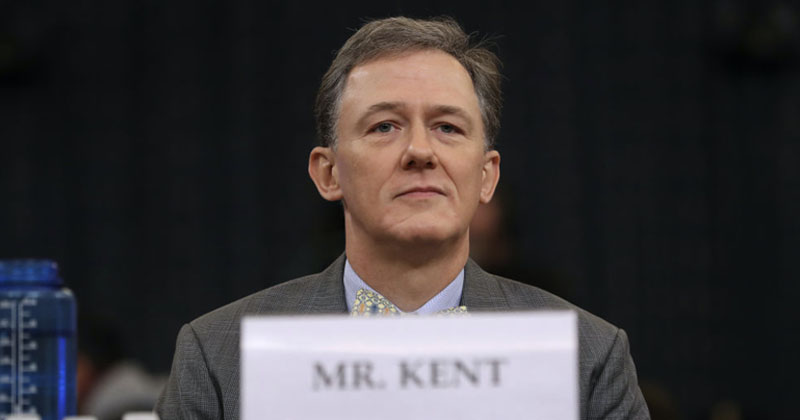 A witness brought forward by the Democrats to testify about Trump’s Ukraine phone call admitted that Ukraine officials should investigate Burisma Holdings for possibly bribing prosecutors to quash a probe into Joe Biden’s son Hunter.

During his opening statement on Wednesday, Deputy Assistant Secretary of State George Kent testified that he raised concerns to then-Vice President Biden about a conflict of interest involving Hunter Biden and Burisma Holdings.

George Kent admits he raised concerns about Hunter Biden working for a Ukrainian gas company in 2015:

“In a briefing call with…the office of the Vice President…I raised my concern that Hunter Biden’s status…could create the perception of a conflict of interest.” pic.twitter.com/6cAznWhSf0

Then when pressed by the GOP’s counsel, Kent confessed that investigating corruption involving Burisma and Ukraine prosecutors who shut down inquiries into Hunter Biden was warranted.

“I would agree the Ukrainian law authorities should uphold the rule of law and hold people account for breaking Ukrainian law,” Kent said, adding that energy company Burisma Holdings’ “business reputation is mixed.”

Hunter served on the board of the company for $50,000 a month despite having no energy industry experience while his father Joe Biden helmed Ukraine policy for the Obama administration.

Even New York Times reporter Kenneth Vogel had to admit that Kent torpedoed the Democrats’ talking point that Trump trying to investigate corruption involving Burisma Holdings and Hunter Biden was an abuse of power.

Maybe a small victory for Republicans: GEORGE KENT testifies that Ukrainian prosecutors “should” investigate the oligarch owner of BURISMA for possibly paying a bribe to kill an investigation.

Small victory? That’s the entire basis for the Democrats’ impeachment circus against Trump!

To recap, one of the Democrats’ main witnesses just nuked their central argument for impeaching Trump on the first day of their hearings.

Matt Bracken breaks down the whistleblower Eric Ciaramella as the key to understanding the coup against Trump.