If you are an American, your freedom of speech is under attack.  Over the past week, remarks made by Chick-fil-A president Dan Cathy defending traditional marriage have sparked controversy all over the nation. 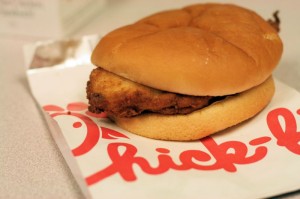 Many Americans have expressed support for his remarks and many have expressed disdain for his remarks.  And all of that is fine, because in the United States people are supposed to be able to express their opinions.  But in Chicago, Boston and other U.S. cities, politicians are actually promising to keep any more Chick-fil-A stores from opening because their CEO does not support gay marriage, and that crosses the line.  When politicians threaten to ban a business from their cities just because the CEO does not hold the “politically correct” position on a social issue that is an attack on the freedom of speech of every American.  You see, the truth is that the enforcers of political correctness in America are very “tolerant” except when somebody disagrees with them.  The politically correct control freaks that are trying to ban Chick-fil-A from their cities would try to ban Chick-fil-A from opening any more restaurants in the entire country if they had the power to do so.  The goal of these politically correct control freaks is to intimidate.  They want to end debate on these social issues by shutting down the free speech of the opposition.  In the end, if America continues to go down this path it will end up looking just like many of the other totalitarian regimes throughout history where free speech has been banned.

Once again, in America everyone has the right to say whatever they want to about Chick-fil-A.

However, when politicians try to ban a company from doing business in their areas because one of the company executives does not hold the “correct” political view about an issue that is a major problem.

This week, Chicago alderman Joe Moreno wrote a piece for the Chicago Tribune in which he explained why he is going to refuse to allow Chick-fil-A to open a new restaurant in his ward….

There are consequences for one’s actions, statements and beliefs. Because of this man’s ignorance, I will deny Chick-fil-A a permit to open a restaurant in my ward.

Apparently he has the power to single-handedly block the new restaurant that Chick-fil-A was hoping to open up….

Home Depot in the 2500 block of North Elston Avenue wants to sell a piece of its land so that a Chick-fil-A restaurant can open in the 1st Ward, where I am alderman. It would be the fast-food chain’s first “stand-alone” Chicago restaurant. But to subdivide the land, the companies need my approval.

Because the CEO of Chick-fil-A will not conform to Joe Moreno’s social values, Chick-fil-A is now essentially banned from that entire section of Chicago.

Not that Chick-fil-A will be able to open up new stores in other areas of Chicago either.

Chicago Mayor Rahm Emanuel is promising to do what he can to keep Chick-fil-A from expanding any further in Chicago….

“Chick-fil-A’s values are not Chicago values. They’re not respectful of our residents, our neighbors and our family members. And if you’re gonna be part of the Chicago community, you should reflect Chicago values”

Apparently anyone that does not believe in gay marriage does not “reflect Chicago values”.

But this is just the beginning.  One group is trying to have Chick-fil-A kicked off of college campuses all over America.  The following is from a recent CBS News article….

The gay rights group Equality Illinois is launching a campaign against Chick-Fil-A – petitioning universities and lawmakers to evict the fast food restaurant from their campuses and planning a “kiss-in” campaign by gay and lesbian couples outside Chick-Fil-A restaurants.

The message is clearly one of intimidation.

Either conform or suffer the consequences.

Sadly, politicians all over America are reacting just like politicians in Chicago have done.

The Mayor of Boston, Thomas Menino, has pledged to do all that he can to keep Chick-Fil-A out of the entire city of Boston.  The following is what he told the Boston Herald on Thursday….

“Chick-fil-A doesn’t belong in Boston. You can’t have a business in the city of Boston that discriminates against a population. We’re an open city, we’re a city that’s at the forefront of inclusion”

But Chick-fil-A does not discriminate.

They serve anyone that wants a chicken burger and they are open to hiring anyone.

It is just that the CEO of the company does not think gay marriage is a good idea (along with half of the rest of America) and this absolutely infuriates the politically correct crowd.

“That’s the Freedom Trail. That’s where it all started right here. And we’re not going to have a company, Chick-fil-A or whatever the hell the name is, on our Freedom Trail.”

In addition, he penned a furious letter to Chick-fil-A headquarters that you can read right here.

The town of Mountain View, California has also blocked a new Chick-fil-A restaurant from opening up.

In the months to come we will probably see much more of this.

And Chick-fil-A is probably going to get booted off of a whole bunch of college campuses.

In February, Northeastern University refused to allow a Chick-fil-A store to open on their campus, and student groups around the country are already mobilizing to oppose Chick-fil-A on more campuses.

This is the kind of religious fervor the politically correct crowd has.  You are either with them or you are dog manure.

For example, Roseanne Barr wished cancer on those that eat at Chick-Fil-A on Twitter the other day.

So what were these supposedly “bigoted” comments that started this uproar in the first place?

The following is what Chick-fil-A president Dan Cathy recent said during an interview with the Baptist Press….

“We are very much supportive of the family — the biblical definition of the family unit. We are a family-owned business, a family-led business, and we are married to our first wives. We give God thanks for that. We operate as a family business … our restaurants are typically led by families; some are single. We want to do anything we possibly can to strengthen families. We are very much committed to that”

Wow, that is some pretty controversial stuff, eh?

Certainly this could not be enough to spark a nationwide protest.

Perhaps it is what he said recently on “The Ken Coleman Show”….

“I think we are inviting God’s judgment on our nation when we shake our fist at Him and say, ‘We know better than you as to what constitutes a marriage.’ I pray God’s mercy on our generation that has such a prideful, arrogant attitude to think that we have the audacity to define what marriage is about.”

Is that statement really worth going crazy over?

To the politically correct crowd it is.

They simply cannot tolerate a major public figure such as the CEO of Chick-fil-A saying that gay marriage is wrong.  Plus they are always looking for more ways to chill the free speech of others that would speak out against gay marriage.  The following is what John Hayward of Human Events said about all of this recently….

“The name of the game being played against Chick-fil-A involved ending the discussion, by ruling one side of this important social debate completely out of order, and dismissing their beliefs as unworthy of respect. All resistance to gay marriage is instantly transmuted into personal hatred of gay people. On the other hand, criticism of traditional marriage proponents cannot be viewed as hateful, no matter how angrily it might be expressed. It’s a rigged heads-we-win, tails-you-lose game.”

The politically correct crowd does not want a debate about gay marriage.

What they want to do is to completely intimidate the other side and shut down the debate completely so that they can win by default.

Wednesday, August 1st, has been designated as “Chick-fil-A Appreciation Day”.  I encourage all of you to go out and buy a chicken burger that day to show your support of free speech.

If we don’t stand up for free speech now, soon it will be totally gone.

Already, the name of Jesus is becoming a forbidden word all over America.  Just consider the following examples….

-All over the United States chaplains are being banned from praying in the name of Jesus.

-You can say just about anything you want in U.S. public schools these days except for anything having to do with Jesus.  In fact, if you are a public school student and you try to talk about Jesus with your fellow classmates there is a good chance that you will be suspended from school.

-In many areas of America today, if you want to go out on a public sidewalk and discuss your faith with others there is a good chance that you will be arrested.

-If you are anti-abortion, if you have “radical theology” or if you are against “the New World Order”, there is a chance that you will be labeled as a “potential terrorist” by the Department of Homeland Security.

In the end, we will end up just like North Korea if we are not very careful.

In North Korea, if you say something that is not “politically correct” you and your entire extended family could literally be on the next train to a concentration camp.

Today it is estimated that 70,000 Christians are being held captive in concentration camps in North Korea.  Many of those believers are likely to spend the rest of their lives toiling in conditions that are absolutely nightmarish simply because they believe the “wrong thing”.

If you don’t think that such a thing could ever happen in America, you are dead wrong.

We are moving a little bit more in that direction every single day, and this latest attack on Chick-fil-A is another example of this trend.

Once our freedom of speech is gone, it will be incredibly difficult to ever get back.

Stand up for freedom of speech while you still can.

So what do you think about the attacks on Chick-fil-A?  Please feel free to leave a comment with your opinion below….