At Point Mugu Naval air station, ground crews prepped an F6F-5K wildcat drone for its last flight ever. The Hellcat was painted high-visibility red and was rigged to be guided by remote control. The plane was to fly out over the vast pacific into a training scenario where the navy would blast it out of the sky for target practice. But the Hellcat had other ideas. 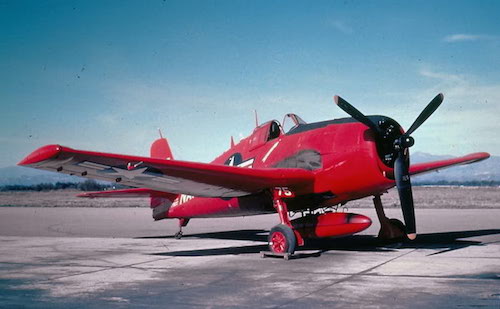 Shortly after 11:30 A.M. the Hellcat drone took off from the navy base heading west over the ocean. Soon thereafter it started a lazy turn to the south and began heading straight towards the teeming metropolis of Los Angeles. The remote controllers at the navy base tried frantically to turn the escaped plane back out to the ocean to no avail. Having lost contact it proceeded to head straight into the heart of one of the most populated areas in the country.

When all backup systems failed, the Navy finally gave up and called for assistance. As the Navy had no fighter aircraft standing by, they swallowed their pride and made a call to Oxnard Air Force Base. Five miles north of the navy base were two F-89D Scorpion interceptor jets ready to scramble. Being that this was in the thick of the cold war era, the planes were armed and fueled and ready to go.  The Scorpions were armed with two rocket pods containing 52 Mighty Mouse rockets. These rockets were designed to be fired into approaching Russian bomber formations and thus had no guidance systems. However, today, this was an altogether different threat. 1st Lt. Hans Einstein and his radar op 1st Lt. C. D. Murray sprinted across the tarmac and climbed into their waiting silver steed. 1st Lt. Richard Hurliman and 1st Lt Walter Hale jumped into the second plane and joined the pursuit. 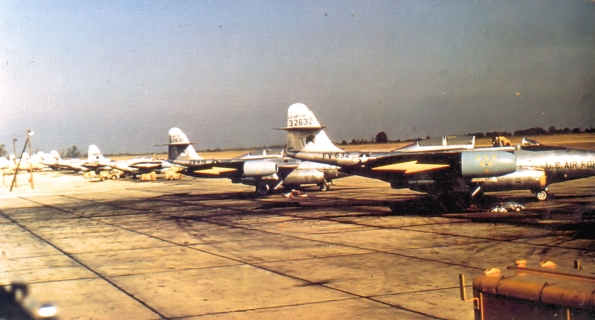 The Air Force planes raced southward at full speed to intercept the small wandering blip on their radar. At 30,000 feet just north of Los Angeles the sprinting jets intercepted the portly drone. It was on a southwest course that took it directly over Los Angeles, then it turned slowly circling over the city of Santa Paula. The pilots were waiting for it to wander away from populated areas so they could blast it from the sky.

Soon the red Hellcat drifted over a rural area known as Antelope Valley. The pilots tried to fire their rockets with a turning fire-fire control method, but a malfunction in the system prevented the rockets from igniting. The drone then turned southeast and began heading back for the center of Los Angeles. Under pressure, the pilots decided it was now or never. They abandoned the automatic fire modes on the rockets and decided to launch them manually. One snag was that the gun sights had recently been removed from the planes! The theory was that they shouldn’t ever have to use them because the automated firing system would target the rockets, but it had failed. 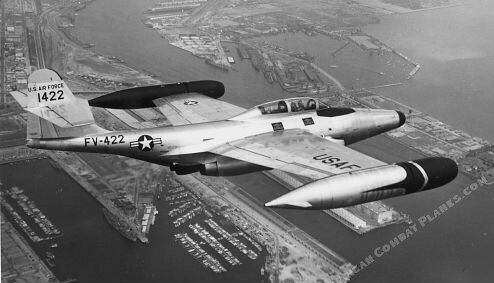 The pilots decided to fly by the seat of their pants and began their first rocket run. They set their intervalometers to “ripple fire,” which would strafe the plane with three rocket salvos. The first plane lined up and let loose… and missed completely. The second plane’s rockets undershot the fleeing drone. 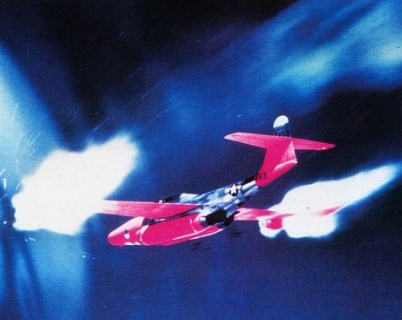 The rockets blasted past the mindless drone, overshooting their target. They then descended into the mountains near the town of Castaic and exploded in the forest below. They started a raging forest fire that would destroy 150 acres in an area known as Bouquet Canyon.

The second salvo of rockets also missed the drone, blasting into the town of Newhall. These rockets started fires in an oil field. They ignited a number of oil sumps and began a fire that burned more than 100 acres of brush. These fires blazed out of control and almost reached the Bermite Powder company’s explosives plant!

The drone continued to drift northward toward the town of Palmdale. Frustrated, the pilots tried another rocket run. The first salvo went wide again, and of the second salvo, a few Mighty Mouse rockets bounced harmlessly off of the slow moving drone’s belly.

Suddenly in the quiet bucolic town of Palmdale, all hell broke loose. Mighty Mouse rockets fell from the sky like fiery hail. An explosion outside Edna Carlson’s house caused shrapnel to smash her front window, blast through a wall, and wreck her pantry. Mrs Lilly Willingham heard a deafening explosion and nearly missed being maimed by a hot piece of metal that lodged in the wall inches from her face in her own living room. A rocket exploded in the middle of the street directly in front of the car young Larry Kemp was driving. The explosion blew out his tires, and made Swiss cheese of the front of his vehicle.

After a few minutes the mayhem subsided and the bewildered residents of Palmdale searched the skies. Was this a coordinated Russian attack? A nefarious Sunday surprise?  Luckily, no one was injured in the battle and 13 dud rockets were recovered by air force ordinance disposal teams. But it took 500 of the region’s firefighters two days to put out the brush fires that raged.

The pilots of the interceptor jets were running on fumes so they abandoned the mission and returned to their base defeated. The drone itself headed east and ran out of fuel. It descended in a spiral glide into an unpopulated area eight miles east of Palmdale. In its final moments, it sliced through some power lines and cartwheeled into the dirt, disintegrating in the crash.

So this was the story of one of the only aerial battles to be fought in the skies over the continental United States. The story of how one oblivious, mindless drone evaded the concerted attacks of the state of the art weaponry of its day. A day that will live in infamy for the rest of recorded history and will always be known as the Battle of Palmdale.