Have you ever heard the old saying “the beatings will continue until morale improves”?  According to Wikipedia, that phrase is often “used sarcastically to indicate the counterproductive nature of such punishment or excessive control over subordinates such as staff in the workplace or children living at home.”  Well, apparently Barack Obama believes that the more punishment that he inflicts on the U.S. economy the more we will like him. 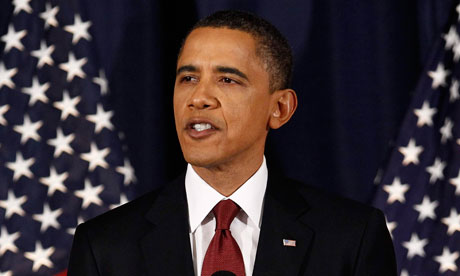 What other explanation is there for his insane economic policies?  The truth is that Barack Obama is killing jobs in America.  His regulations are absolutely crippling our businesses, he has been heavily promoting new job killing “free trade” agreements, Obamacare has the potential to be the most job killing law of all time, and he is running up debt that will crush job creation in this country for ages to come. Obama will likely go down as the most anti-business president in U.S. history.  He has presided over the worst “recovery” from a recession in post-World War II history, and under his leadership a whole host of economic statistics have steadily gotten worse.  The percentage of working age Americans that have jobshas not bounced back since the end of the last recession, and now the next major economic crisis is rapidly approaching.

The following are 10 ways that Obama is killing jobs in America….

It would have revitalized the economies of Montana, South Dakota, Kansas, Oklahoma, Nebraska and Texas.

It would have helped reduce energy costs in the United States.

It would have been good for America.

But instead, Barack Obama chose to listen to radical environmental groups and has blocked the plan.

So we all lose.

The lack of a coherent energy policy from this administration has hurt all of us.  Since Barack Obama entered the White House, the price of gasoline has risen by about 84 percent.

As I wrote about the other day, Obamacare is going to kill countless numbers of jobs.

Obamacare is going to require all businesses that have at least 50 full-time workers to either provide very expensive health insurance for their employees or pay a $2,000 penalty for each worker after the first 30 employees.

This is going to do a few things….

1) It is going to encourage small businesses to stay under the 50 full-time employee cap.

2) It is going to encourage some businesses to fire workers because they are now too expensive to be profitable.

But even though Obama knows all of this, he is completely and totally unrepentant about this law.  The following is a statement that Obama made at a campaign event the other day….

The Obama administration has been piling tons of new regulations on to the backs of our businesses and this is absolutely killing many of them.

The Heritage Foundation says that “the Obama Administration imposed 75 new major regulations from January 2009 to mid-FY 2011, with annual costs of $38 billion. There were only six major deregulatory actions during that time, with reported savings of just $1.5 billion.”

Just for Obamacare, 13,000 pages of new regulations have already been written.

How in the world are U.S. businesses supposed to thrive in such an environment?

Sadly, our whole society has become absolutely obsessed with regulations.

The following is a perfect example of the “regulation mindset” that is pervading our society these days….

A Florida lifeguard has been booted from his lifeguard chair for running to save a man who was floundering in the surf.

Tomas Lopez , 21, was fired by his supervisor for vacating his lifeguarding zone to save a man drowning in an unprotected area of the beach in Hallandale Beach, Fla., on Monday, reports the Sun Sentinel.

Lopez’ employer is not paid to patrol the zone where the man had been in trouble.

Can you imagine a lifeguard being fired for saving a drowning man because it was “not his zone”?

That story does not have anything to do with Obama, but it does show the kind of mentality that control freaks such as Obama are imposing on this nation.

Barack Obama keeps trying to hit us with sneaky new taxes.  There are more than 20 new taxes in the Obamacare law alone.

Obama does not seem to understand the impact that heavy tax burdens are having on businesses all over America.  The following is from a recent Forbes article….

The president’s (and congressional Democrats’) insistence on higher net taxes is a job-killer in several ways: Higher taxes prevent businesses from expanding and deter consumers from spending.  Many in the middle class already feel that taxes are extortionate and, fearing even higher taxes, have decreased their spending, thereby reducing demand for goods and services.

Barack Obama has been prancing all over the nation declaring that “free trade” will mean more jobs for American workers.

By now, hopefully you all know what a lie that is.  Every single year, the U.S. buys hundreds of billions of dollars more stuff from the rest of the world than they buy from us.  Those dollars could be going to support U.S. jobs and U.S. businesses instead.

Because we have such radically unbalanced trade, our formerly great manufacturing cities are turning into festering sores.  Cities that were once teeming with economic activity have degenerated into hellholes.

During 2010 alone, an average of 23 manufacturing facilities permanently shut down in the United States every single day.

Overall, the United States has lost more than 56,000 manufacturing facilities since 2001.

So why doesn’t Obama do something about this?

Instead of reversing this trend, he says that he wants even more trade with China.

China hits our goods with ridiculous tariffs and we let them get away with it.  According to the New York Times, a Jeep Grand Cherokee that costs $27,490 in the United States costs about $85,000 in China thanks to all the tariffs.

And Obama wants more of this?

According to the Economic Policy Institute, America is losing half a million jobs to China every single year.

Do we really want to keep losing those jobs?

According to Professor Alan Blinder of Princeton University, 40 million more U.S. jobs could be sent offshore over the next two decades if current trends continue.

So what is the answer that Obama proposes?

In addition to killing millions of our jobs, that new treaty would reportedly ban all “Buy American laws“.

What in the world is Obama doing?

#6 Killing The Coal Industry On Purpose

New carbon emission rules from the Environmental Protection Agency seem to target coal-powered plants in particular.  I guess this fulfills Barack Obama’s promise to kill off the coal industry.  The following is from the Washington Post….

Industry officials and environmentalists said in interviews that the rule, which comes on the heels of tough new requirements that the Obama administration imposed on mercury emissions and cross-state pollution from utilities within the past year, dooms any proposal to build a coal-fired plant that does not have costly carbon controls.

“This standard effectively bans new coal plants,” said Joseph Stanko, who heads government relations at the law firm Hunton and Williams and represents several utility companies. “So I don’t see how that is an ‘all of the above’ energy policy.”

Instead of spending our money in ways that would be productive for our economy, the Obama administration continues to spend money in some of the most wasteful ways imaginable.  The following are just a few examples from one of my previous articles….

-In 2011, the National Institutes of Health spent $592,527 on a study that sought to figure out once and for all why chimpanzees throw poop.

-The National Institutes of Health has spent more than 5 million dollars on a website called Sexpulse that is targeted at “men who use the Internet to seek sex with men”.  According to Fox News, the website “includes pornographic images of homosexual sex as well as naked and scantily clad men” and features “a Space Invaders-style interactive game that uses a penis-shaped blaster to shoot down gay epithets.”

-If you can believe it, the federal government has actually spent $750,000 on a new soccer field for detainees held at Guantanamo Bay.

You can find many more examples of this phenomenon here and here.

At the same time that Barack Obama is absolutely crippling small businesses, he is also encouraging more Americans to kick back and become financially dependent on the federal government.  But it is not good to have tens of millions of Americans sitting around and doing nothing productive for the economy.

Since Barack Obama entered the White House, the number of Americans on food stamps has increased from 32 million to 46 million.

But for Obama that is not enough.

Amazingly, the Obama administration has been spending millions of dollars on ads that encourage even more people to go on food stamps….

The U.S. Department of Agriculture has been running radio ads for the past four months encouraging those eligible to enroll. The campaign is targeted at the elderly, working poor, the unemployed and Hispanics.

The department is spending between $2.5 million and $3 million on paid spots, and free public service announcements are also airing. The campaign can be heard in California, Texas, North Carolina, South Carolina, Ohio, and the New York metro area.

Overall, the amount of money that the federal government gives directly to the American people has increased by 32 percentsince Barack Obama entered the White House.

Barack Obama may enjoy playing Santa Claus with our money, but this is getting way out of hand.

More Americans than ever are coming to realize that the Federal Reserve is at the very heart of our economic problems.

And who has been running the Federal Reserve during these troubled times?

Sadly, Federal Reserve Chairman Ben Bernanke has a track record of failure that is absolutely legendary.  If you have forgotten how badly he has performed over the years, just check out this article, this article and this article.

But instead of dumping him when his first term ended, Barack Obama decided to nominate Ben Bernanke for another term.

Why does it seem like every single decision that Barack Obama makes is bad for the economy?

The debt that Barack Obama is piling up right now will haunt the U.S. economy for ages to come.

When Barack Obama first entered the White House, the U.S. national debt was sitting at 10.6 trillion dollars.  Now it is right on the verge of crossing the 16 trillion dollar mark.

Amazingly, Obama has added more to the national debt than the first 41 presidents combined.

At this point, the United States has more government debt per capita than Greece, Portugal, Italy, Ireland or Spain does.

But Barack Obama shows no sign of slowing down.  In fact, the federal government continues to steal approximately 150 million dollars from our children and our grandchildren every single hour.

In the end, this is going to absolutely destroy our financial system and our economy will collapse.

So what do all of you think about Barack Obama’s economic policies?