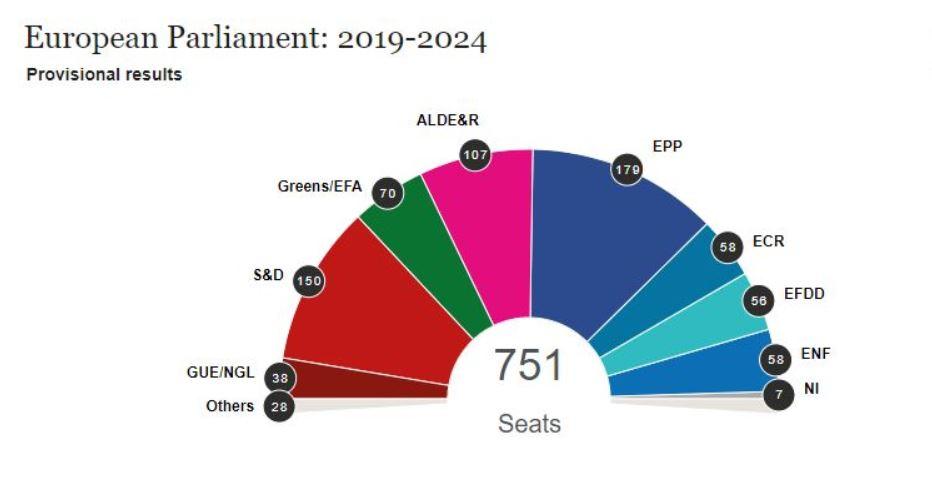 The preliminary results from the European Parliamentary elections are in. And just like the polls anticipated, the pro-European status quo has suffered a serious blow.

Winning over 30% of seats, Eurosceptic parties and anti-establishment groups now control their largest bloc of votes since the first EU Parliamentary election in 1979.

Though pro-European groups together maintain a clear majority, this broad grouping has become increasingly fragmented, which could complicate policy making, while a strong showing from eurosceptics will mount a serious challenge to the status quo, according to a group of analysts from Deutsche Bank.

This shows us two things: first, the pro-European camp has definitely become more fragmented and could not prevent losing some seats to the Eurosceptics who dream if not (anymore) of the end of the EU at least of a substantially different one. Second, pro-Europeans group together will still hold a clear majority of two-thirds of the seats in the next EP. This means: policymaking for them will become more complex and require broader cross-party agreements and discipline. But Eurosceptics will not be able block decisions unless centrist pro-European parties fail to cooperate.

Typically, turnout in the EU Parliamentary race is lackluster, similar to that of a (typical) American midterm election. But this year, turnout surged to its highest level in decades: With a provisional turnout of 51%, the strongest in 25 years, electoral turnout broke the downward trend of the past decade (that’s compared with 43% in 2014). However, differences in turnout were substantial across EU members, with the UK and Eastern European states recording the lowest turnount.

In the UK, which only opted to participate in the vote at the last minute as part of a can-kicking agreement with Brussels to extend the deadline for the UK’s departure from the EU, Nigel Farage’s Brexit Party won a plurality of votes (31.7%) – though liberal-leaning media outlets in the UK opted to spin the result as a victory for the “remain” camp, as the LibDems, Greens, SNP, Change UK and miscellaneous other parties won a combined 38%.

Despite being only four months old, Farage’s Brexit Party emerged as one of the largest parties in the European Parliament (it’s tied for first with Angela Merkel’s center-right CDU/CSU, both with 29 seats).

Though Sweden’s Social Democrats remained the largest party in Europe, Sweden’s anti-immigration Sweden Democrats won 15.4% of the vote, up from roughly 4% in the 2014 EU Parliamentary vote, growing their share of seats from two to three.

However, analysts are skeptical that the eurosceptic groups will be able to overcome partisan squabbling and work together to form a pan-European coalition – which is the only way to exercise real influence within the European Parliament. They will also lose some of their support when the UK finally leaves the bloc (if that ever happens), and the UK’s 73 parliamentary seats are redistributed.

Here’s what a group of analysts from Deutsche Bank said.

With above 30% of seats, Eurosceptic and anti-establishment groups and (nonaligned) parties are estimated to have increased their weight in EU policy making over next five years. But we remain doubtful that these groups will manage to permanently overcome their (many) differences and use their leverage to promote their own coherent policy agenda.

One issue: Whether Farage’s Brexit Party will break away from Farage’s longstanding alliance with M5S in the EU Parliament to instead align itself with Salvini’s League Party. But the same issue exists on the other end of the spectrum, as DB points out.

Balance in the next EP will also depend on group formation over the next few weeks. Big questions remain e.g. regarding the planned joint group between the liberal ALDE and French President Macron’s Renaissance as well as the composition of Italian Deputy PM Matteo Salvini’s new far-right Eurosceptic alliance and the efforts of Five Star Movement to create a new (also Eurosceptic) anti-establishment group, potentially to be joined by Nigel Farage’s Brexit Party from the UK.

Whatever the case may be, the election of the next European Commission President looks to be an incredibly fraught process, as none of the ‘lead candidates’ will find it easy to win a majority of support. A lengthy standoff with the European Council could push the appointment of the next Commission beyond October, which would raise serious questions about the bloc’s governability. EU leaders will meet on Tuesday at an informal summit to begin what could be an extremely fraught process of picking the next top jobs (which, remember, will include the next board of governors and president of the ECB).

During the campaign, Farage tried to cast the vote in the UK as a referendum on Brexit, a theme that most of the British media quickly embraced. And according to Commerzbank’s Thu Lan Nguyen, the Brexit Party’s performance suggests that the odds of a ‘no-deal’ Brexit have indeed risen – though Nguyen insisted that ‘no deal’ isn’t the most likely outcome. Boris Johnson becoming prime minister would increase the odds of no deal even further. Even if new elections are called, it likely wouldn’t tip the balance of power in favor or against Brexit.

In the mean time, the GBP spot rate will continue to move sideways.

In summary: The vote was a sweeping victory for populists, a fact that the liberal press across the Continent has been working to obscure.

Massive success for the right-wing and EU skeptics this election!

Here’s why CNN’s ratings are collapsing.