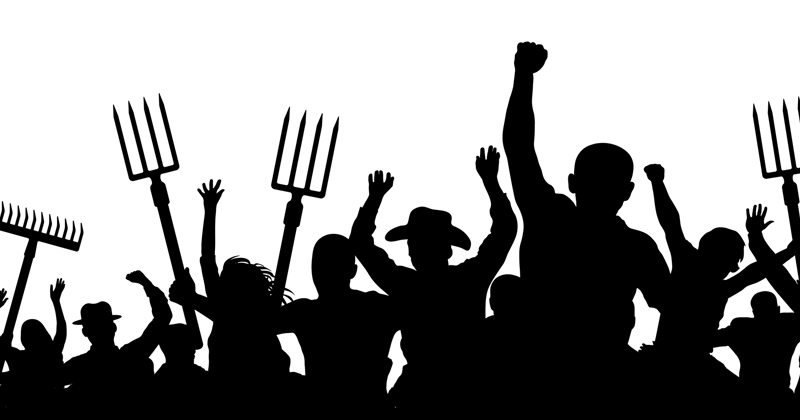 As of April 6, forty-one states have statewide “stay-at-home” decrees in place. These orders vary widely from place to place. In some states, there are long lists of exempted industries including marijuana dispensaries, liquor stores, hardware stores, and of course, grocery stores. In some states with these edicts, public lands, state parks, and beaches remain open. In some states, city parks are more crowded than ever as local residents, with little else to do, attempt to recreate. In other places—such as California—one can be arrested for paddleboarding all alone in the ocean.

Yet in all of these places, the current regime of rule by decree will have—and already has had—a devastating effect on many small and medium-sized businesses and their employees. As governments have created new arbitrary definitions of what constitutes an “essential” business, some businesses find themselves forced to close. Employees have lost these jobs. The owners of these enterprises will likely lose far more as debts mount and business investments are destroyed. As unemployment and poverty increase, the usual pathologies will arise as well: suicides, child abuse, and stress-induced death.

Yet the politicians—mostly state governors, mayors, and unelected bureaucrats—remain popular. In New York State, where the lockdown orders are among the most draconian in the nation, it is now claimed that 87 percent of those polled approve of Governor Andrew Cuomo’s handling of the situation. As Donald Trump’s administration has recommended ever harsher government limits on the freedom of Americans, his poll numbers have only improved.

Meanwhile, among critics there appears to be a misconception of these lockdowns (which are very often only partially imposed or enforced) as being imposed over the howls of the local population, which is being silenced and cowed by jackbooted local police.

If only that were true. In most places, it appears clear that a great many residents approve of the lockdowns. We see this support in the form of all the local scolds who complain on Nextdoor.com about neighborhood children who don’t properly engage in “social distancing.” We see it in the people who call the police to report violators of stay-at-home orders. We see it in those who report local businesses for allowing too many people inside.

Viewed in this way, it may be more likely that state governors and other politicians are afraid of being seen as doing too little, rather than as overstepping their authority to impose public safety measures.

After all, given that the COVID-19 virus is far more deadly for the elderly than for younger groups, one might reasonably suppose that the elderly are most likely to become hysterical over the virus. For politicians, that’s one group you don’t want to cross. As the AARP notes:

For nearly 40 years, the turnout of voters over age 45 has significantly outpaced that of younger Americans. In the 2016 presidential election, for example, 71 percent of Americans over 65 voted, compared with 46 percent among 18- to 29-year-olds, according to U.S. Census Bureau data. While analysts point to increased energy among younger voters over the past couple of elections, people over 65 continue to show up at the polls far more than any other age group. At the same time, the number of voters who fall into the category of “older” keeps rising.

If a governor is receiving calls from local voters about the need to “do something”—especially if they’re in a demographic that’s more likely to vote—then it’s no surprise if that governor soon discovers that there is a “need” to impose a stay-at-home order post-haste.

Meanwhile, governors and other officials receive daily pressure from unelected bureaucrats who look to harness the benefits of public acquiescence. US News reports on a likely typical case in Iowa:

One of the most outspoken critics of Iowa’s approach to fighting the outbreak has been Eli Percenevich, an epidemiologist and physician who oversees a group of researchers studying infection prevention at the University of Iowa and Iowa City’s VA Hospital.

He has called on [Iowa governor Kim] Reynolds to issue a shelter-in-place order, saying many Iowans aren’t getting the message that they need to stay home.

The “solution” favored by these government employees is clear: more lockdowns, more business closures, harsher punishments for violators. Yes, some governors push back on these demands, but as time goes on they “waver,” “soften,” and eventually change their minds as panicky residents and government-employed “experts” demand action.

Of course, none of the politicians or bureaucrats who want to deprive people of their property and their employment will lose their jobs. Their taxpayer-funded salaries are quite safe. (At least until state and local tax revenues collapse.) But so far, I’ve heard of no governor willing to forego his own salary while millions are put out of work by government decrees.

At this point, many elected officials likely see being “asleep at the switch” as a more politically damaging charge than “being a tyrant.” It’s possible that this may change as the realities of mass unemployment and bankruptcy sink in. But for now most politicians, like the people who vote for them, are clinging to the idea that if the federal government prints enough money and bails out enough industries everything will soon return to normal.

The fact that business owners and entrepreneurs are being sacrificed is of little political import to elected officials or most voters. After all, only 10 percent of Americans actually make a full-time living from businesses they own. Only a small minority of the population understands firsthand how jobs are created and how payrolls are met. Much of the rest of the population thinks wages and wealth magically appear from the ether. If there is unemployment and low wages, it’s because business owners are “greedy” or unwilling to share the wealth. Thus, if businesses are temporarily shut down “for our own good,” then surely those business owners will just use their secret hidden wealth to start up those businesses again when the panic is over.

Thus, we’re not witnessing a usurper regime imposing unpopular measures on a resistant but helpless citizenry. We’re more likely witnessing widespread mob rule, the central characteristic of which is rule by the majority with no regard for the rights of dissenting minorities. The government may now be ruling by decree, but it is in many places doing so with the hearty approval of the majority. Politicians have calculated that they’re likely to remain popular so long as they cultivate an image of “decisive leadership” through strong decrees and demands for compliance in the name of safety. As Cuomo’s surging popularity suggests, this may be a safe political move.

Certainly there are those who resist. There are those for whom the rule of law, the Bill of Rights, and basic freedoms actually matter. But for others, principles such as these are quickly forgotten once fear and anxiety enter the picture. The rights of minority groups (such as business owners or old-fashioned Bill of Rights enthusiasts) mean little or nothing once the majority—conditioned by years of public schooling to demand a government solution to nearly everything—decides that such rights are an inconvenient obstacle to “doing something.”

The public demands action. Politicians are more than happy to oblige.