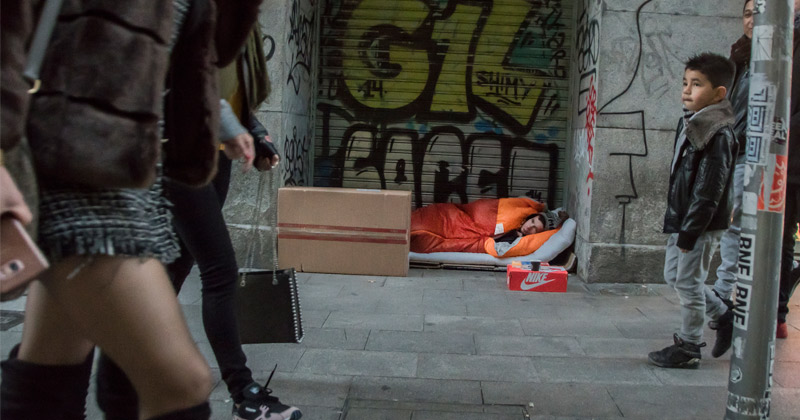 The theme of this book is the conquest of poverty, not its “abolition.”

Poverty can be alleviated or reduced, and in the Western world in the last two centuries it has been almost miraculously alleviated and reduced; but poverty is ultimately individual, and individual poverty can no more be “abolished” than disease or death can be abolished.

Individual or family poverty results when the “breadwinner” cannot in fact win bread; when he cannot or does not produce enough to support his family or even himself. And there will always be some human beings who will temporarily or permanently lack the ability to provide even for their own self-support. Such is the condition of all of us as young children, of many of us when we fall ill, and of most of us in extreme old age. And such is the permanent condition of some who have been struck by misfortune — the blind, the crippled, the feeble-minded. Where there are so many causes there can be no all-embracing cure.

And this in turn is merely another way of pointing out that relief, or redistribution of income, voluntary or coerced, is never the true solution of poverty, but at best a makeshift, which may mask the disease and mitigate the pain, but provides no basic cure.

Moreover, government relief tends to prolong and intensify the very disease it seeks to cure. Such relief tends constantly to get out of hand. And even when it is kept within reasonable bounds it tends to reduce the incentives to work and to save both of those who receive it and of those who are forced to pay it. It may be said, in fact, that practically every measure that governments take with the ostensible object of “helping the poor” has the long-run effect of doing the opposite. Economists have again and again been forced to point out that nearly every popular remedy for poverty merely aggravates the problem. I have analyzed in these pages such false remedies as the guaranteed income, the negative income tax, minimum-wage laws, laws to increase the power of the labor unions, opposition to labor-saving machinery, promotion of “spread-the-work” schemes, special subsidies, increased government spending, increased taxation, steeply graduated income taxes, punitive taxes on capital gains, inheritances, and corporations, and outright socialism.

But the possible number of false remedies for poverty is infinite. Two central fallacies are common to practically all of them. One is that of looking only at the immediate effect of any proposed reform on a selected group of intended beneficiaries and of overlooking the longer and secondary effect of the reform not only on the intended beneficiaries but on everybody. The other fallacy, akin to this, is to assume that production consists of a fixed amount of goods and services, produced by a fixed amount and quality of capital providing a fixed number of “jobs.” This fixed production, it is assumed, goes on more or less automatically, influenced negligibly if at all by the incentives or lack of incentives of specific producers, workers, or consumers. “The problem of production has been solved,” we keep hearing, and all that is needed is a fairer “distribution.”

What is disheartening about all this is that the popular ideology on all these matters shows no advance — and if anything even a retrogression — compared with what it was more than a hundred years ago. In the middle of the nineteenth century the English economist Nassau Senior was writing in his journal:

It requires a long train of reasoning to show that the capital on which the miracles of civilization depend is the slow and painful creation of the economy and enterprise of the few, and of the industry of the many, and is destroyed, or driven away, or prevented from arising, by any causes which diminish or render insecure the profits of the capitalist, or deaden the activity of the laborer; and that the State, by relieving idleness, improvidence, or misconduct from the punishment, and depriving abstinence and foresight of the reward, which have been provided for them by nature, may indeed destroy wealth, but most certainly will aggravate poverty.1

Man throughout history has been searching for the cure for poverty, and all that time the cure has been before his eyes. Fortunately, as far at least as it applied to their actions as individuals, the majority of men instinctively recognized it — which was why they survived. That individual cure was Work and Saving. In terms of social organization, there evolved spontaneously from this, as a result of no one’s conscious planning, a system of division of labor, freedom of exchange, and economic cooperation, the outlines of which hardly became apparent to our forebears until two centuries ago. That system is now known either as Free Enterprise or as Capitalism, according as men wish to honor or disparage it.

Because of individual misfortune and individual weaknesses, there will always be some individual poverty and even “pockets” of poverty. But in the more prosperous Western countries today, capitalism has already reduced these to a merely residual problem, which will become increasingly easy to manage, and of constantly diminishing importance, if society continues to abide in the main by capitalist principles. Capitalism in the advanced countries has already, it bears repeating, conquered mass poverty, as that was known throughout human history and almost everywhere, until a change began to be noticeable sometime about the middle of the eighteenth century. Capitalism will continue to eliminate mass poverty in more and more places and to an increasingly marked extent if it is merely permitted to do so.

In the chapter “Why Socialism Doesn’t Work,” I explained by contrast how capitalism performs its miracles. It turns out the tens of thousands of diverse commodities and services in the proportions in which they are socially most wanted, and it solves this incredibly complex problem through the institutions of private property, the free market, and the existence of money — through the interrelations of supply and demand, costs and prices, profits and losses. And, of course, through the force of competition. Competition will tend constantly to bring about the most economical and efficient method of production possible with existing technology — and then it will start devising a still more efficient technology. It will reduce the cost of existing production, it will improve products, it will invent or discover wholly new products, as individual producers try to think what product consumers would buy if it existed.

Those who are least successful in this competition will lose their original capital and be forced out of the field; those who are most successful will acquire through profits more capital to increase their production still further. So capitalist production tends constantly to be drawn into the hands of those who have shown that they can best meet the wants of the consumers.

Perhaps the most frequent complaint about capitalism is that it distributes its rewards “unequally.” But this really describes one of the system’s chief virtues. Though mere luck always plays a role with each of us, the increasing tendency under capitalism is that penalties are imposed roughly in proportion to error and neglect and rewards granted roughly in proportion to effort, ability, and foresight. It is precisely this system of graduated rewards and penalties, in which each tends to receive in proportion to the market value he helps to produce, that incites each of us constantly to put forth his greatest effort to maximize the value of his own production and thus (whether intentionally or not) help to maximize that of the whole community. If capitalism worked as the socialists think an economic system ought to work, and provided a constant equality of living conditions for all, regardless of whether a man was able or not, resourceful or not, diligent or not, thrifty or not, if capitalism put no premium on resourcefulness and effort and no penalty on idleness or vice, it would produce only an equality of destitution.

Another incidental effect of the inequality of incomes inseparable from a market economy has been to increase the funds devoted to saving and investment much beyond what they would have been if the same total social income had been spread evenly. The enormous and accelerative economic progress in the last century and a half was made possible by the investment of the rich — first in the railroads, and then in scores of heavy industries requiring large amounts of capital. The inequality of incomes, however much some of us may deplore it on other grounds, has led to a much faster increase in the total output and wealth of all than would otherwise have taken place.

Those who truly want to help the poor will not spend their days in organizing protest marches or relief riots, or even in repeated protestations of sympathy. Nor will their charity consist merely in giving money to the poor to be spent for immediate consumption needs. Rather will they themselves live modestly in relation to their income, save, and constantly invest their savings in sound existing or new enterprises, so creating abundance for all, and incidentally creating not only more jobs but better-paying ones.

The irony is that the very miracles brought about in our age by the capitalist system have given rise to expectations that keep running ahead even of the accelerating progress, and so have led to an incredibly shortsighted impatience that threatens to destroy the very system that has made the expectations possible.

If that destruction is to be prevented, education in the true causes of economic improvement must be intensified beyond anything yet attempted.