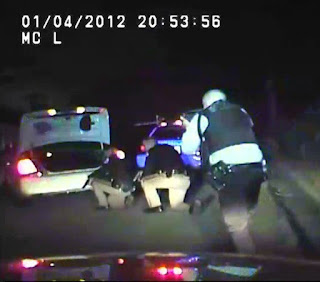 Ogden Police Officer Jared Francom was fatally shot during a raid on the home of Matthew David Stewart last January 4. Francom was part of a twelve-man SWAT team attached to the Weber-Morgan Narcotics Strike Force, a federally subsidized counter-narcotics squad.

A few weeks earlier, a woman named Stacy Wilson who had broken up with Stewart called the Strike Force snitch line to report that Stewart was cultivating marijuana on his property. After three attempts to conduct a “knock and talk” search of the home, the Strike Force obtained a warrant for a nighttime paramilitary raid – despite the fact that they didn’t even bother to do a background check on the accuser.

In familiar fashion, the SWAT team knocked on the front door, shouted “Search warrant!” and immediately broke into the home with a battering ram. Stewart barricaded himself in a room and began shooting. Francom was shot six times, although it’s possible he was hit by “friendly fire.” Five other officers were wounded, as was Stewart, who was arrested in a shed outside his home. He has been charged with one count of aggravated murder and seven counts of attempted aggravated murder. The state intends to seek the death penalty.

A search of the home turned up a handful of marijuana plants. Stewart, a veteran, insists that he used marijuana to treat a variety of physical and psychological conditions that are the residue of his time in the military. He also maintains that he didn’t know that the armed invaders – some of whom had long hair intended to make them look like gang-bangers — were police officers. 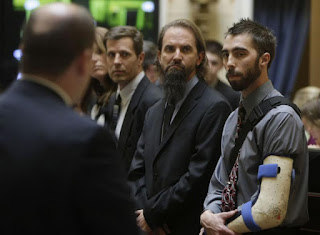 Would you let them into your home? Strike Force members receive an award.

This is a potentially significant detail.

In early September, Salt Lake County District Attorney Sim Gill determined that a man named Priest Jemelle Mitchell was justified in killing an intruder named Brandon Saunders – despite the fact that Saunders was unarmed. Infuriated to learn that Mitchell was involved with his ex-wife, Saunders broke down the door of her apartment. Mitchell responded by fatally shooting Saunders.

After reviewing the evidence, Gill concluded that the act of kicking in the door constituted trespassing with intent to commit an act of violence, and Mitchell was justified in believing that he faced “imminent peril and threat of injury.”
If this is true of a situation in which an unarmed, jealous ex-husband threatens a man who was in his ex-wife’s apartment, how would the same standard not apply to a man confronting six heavily armed strangers who had broken down his door in a nighttime raid?

The men who barged into Stewart’s home insist that they identified themselves as police. But the same was true of the people who raided the Sandy, Utah residence of Clayton Green in early October. In that case, however, the assailants were private sector criminals posing as their state-licensed counterparts.

Mr. Green was greeted at his door by a man wearing police garb, displaying a badge, and demanding access to their home. A few seconds later, Green and his wife were thrown to the floor and handcuffed with zip ties. They were held gunpoint while burglars ransacked the home. Although the Sandy Police Department admits that this incident was not an isolated case, they refuse to say how frequently this kind of thing happens in Utah.

A few days after the incident at the Green family’s home, another armed raid was carried out against an elderly couple in Salt Lake City. Michael and Teresa Ryan were terrorized by an armed gang that busted down their front door and held them at gunpoint. This time, it was the police – specifically, a federally supervised joint narcotics task force – who committed this act of terrorism.

According to Salt Lake City Police Chief Chris Burbank, the only problem with the second raid was that it took place at the wrong address. Drug Enforcement Administration Agent Frank Smith, whose agency participated in the assault, blithely explained that “law enforcement, unfortunately, is not a perfect science.” 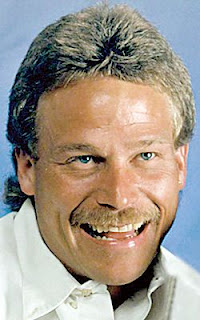 Todd Blair of Roy, Utah was another victim of the imperfect “science” of paramilitary drug enforcement.

At about 10 PM on September 16, 2010, Blair was in the basement of his home when he heard footsteps and the voices of strangers at the back door. Apparently thinking that he was being robbed, Blair grabbed a golf club and went upstairs to confront the trespassers – who were agents of the same Weber-Morgan Narcotics Strike Force that would invade Michael Stewart’s home roughly a year and a half later.

The no-knock raid at Blair’s home was carried out on the basis of a single, anonymous tip that he was selling meth and heroin. After gunning down Blair, the officers were able to scour up less than half an ounce of marijuana.

Following the standard perfunctory and predictable official review, the fatal shooting of Blair by Sgt. Troy Burnett was ruled a “justifiable” use of force by Weber County Attorney Dee Smith – the same official who is now determined to execute Matthew Stewart.

The institutional response to the needless violent death of Todd Blair was the equivalent of a “sucks to be you” shrug. This was decidedly not the case after the death of Officer Francom.

“We have lost and brother and will grieve this loss knowing that officer Francom laid down his life for his friends and community,” lamented Weber County Sheriff Terry Thompson during a press conference following the shooting. He also praised “all of our heroes in the public safety family who have stepped up this day to the task of caring for our wounded warriors.”

That expression shouldn’t be dismissed as a specimen of melodramatic rhetoric: Like nearly everybody in their profession, Sheriff Thompson and the members of the Strike Force see themselves as waging war on the population they supposedly serve – and they demand the unqualified support and admiration of that same population.

Carrying out its duty as a state-aligned media organ, the Deseret News used the death of Jared Francom as an excuse to lecture Mundanes about what we are to consider the peril-forged bond of shared by our uniformed overlords:

The Sunday following the shooting, the entire Ogden Police Department was allowed to take the day off – with pay – in order to deal with its collective bereavement. Utah Governor Gary Herbert ordered flags to be flown at half-staff. The following month, the Utah Legislature held a brief ceremony to honor Francom. During the ceremony, Representative Brad Dee, who represents Ogden, praised Francom for answering the call “to step between good and evil.” 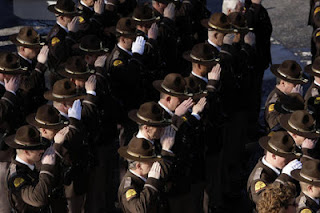 In his remarks at the event, Troy Combs, who was Bishop of Francom’s Mormon congregation, recalled that the officer had grown his hair long as part of his undercover work. In addition to being a police officer, Francom was a Sunday School teacher, Bishop Combs related, and for the kids the experience was like “being taught by Jesus.” This assumes, of course, that the Savior’s day job involved kicking down doors and terrorizing people for consuming substances of which the government disapproves.

“Jared’s was a tragic death,” continued Bishop Combs. “He was murdered in the line of duty. But he did it serving and protecting.”

The first of those statements is an indisputable fact: Jared Francom was an irreplaceable individual – a husband and father – who died in a needless and preventable episode of violence. The second statement is morally unsupportable: Michael Stewart was defending his home against armed strangers he may not have recognized as police officers, and who in any case were not acting as peace officers. The third statement is unambiguously false: The actions of Francom and his comrades at Matthew Stewart’s home had nothing to do with protecting the rights of anybody. 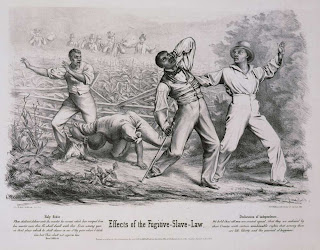 Through his work with a paramilitary unit enforcing drug prohibition, Jared Francom “protected and served” the public in exactly the same sense that 19th Century Deputy U.S. Marshal James Batchelder did in his work enforcing the Fugitive Slave Act.

In early 1854, a young man named Anthony Burns escaped the custody of a Virginia man named Charles Settle, who claimed to “own” him. After Burns had settled down and found gainful work, an informant recognized him as an escaped slave and contacted the authorities. Batchelder was sent to Boston for the purpose of returning Burns to his previous condition of servitude.(Interestingly, this process was called “rendition.”) The marshal quickly located Burns and – after using the pretext of a bogus robbery investigation to place him under arrest — locked him in the federal courthouse. 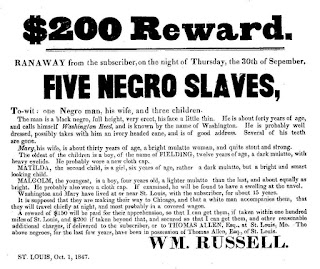 News of this abduction provoked an immediate response from local abolitionists, who organized an armed posse to liberate Burns from his captors. In the ensuing skirmish, Batchelder was fatally shot, but the police retained custody of Burns.

Wanting to avoid further bloodshed, Burns – a devout Christian – asked his supporters not to attempt another rescue. A few days later, Burns was escorted to a ship bound for Virginia. The rendition took place under the watchful eyes of 1,600-man military contingent sent by President Franklin Pierce to deter any further efforts to liberate Burns.

Like Jared Francom, James Batchelder died in the line of duty. Both of their names are inscribed in the “Officer Down Memorial Page.”

“To have faced a mob as a law officer, especially in the days of only the gun and the badge — and little else — is the very core of bravery no matter the circumstances,” declares a tribute posted in honor of the slave-catcher. “To have taken a bullet in the name of the law deems one a hero among heroes. Long live such bravery and honor.”

Apart from those who belong to the Sanctified Brotherhood of Official Coercion, is there anybody today who would regard James Batchelder as a “hero,” and consider his death a noble “sacrifice”?

Anyone burdened with a conscience should recognize that dying in an effort to enslave another human being is ignominious, rather than honorable. Although few police officers are aware of Batchelder’s “sacrifice,” they routinely celebrate the purported valor of officers who meet their mortal end while employing violence to enforce government policies rooted in a denial of self-ownership.

Drug prohibition is a subset of slavery – in both its philosophical premise (the denial of individual self-ownership) and its role in creating a huge and growing population of people in chains. A hundred years from now, assuming that Jesus tarries and Americans rediscover rational thinking, drug enforcement officers will be seen for what they genuinely are: The heirs and successors to 19th Century slave-catchers.