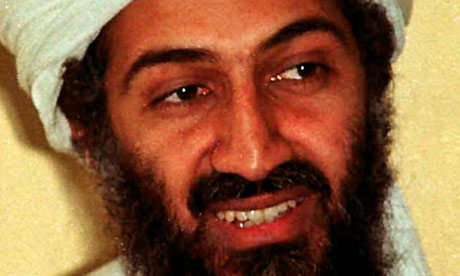 News outlets all over America have repeatedly announced the government story that Navy SEALS recently killed Al Qaeda terrorist leader Osama bin Laden in a palatial “safe house” in Pakistan. But, of course, government photos of the dead bin Laden will not be released to the public for fear of inciting animosity among bin Laden’s militant Muslim followers–as if the announcement that he had been killed wouldn’t be enough to enrage them! And, furthermore, the body of bin Laden was quickly buried at sea out of “respect” for Muslim tradition that one has a speedy burial. But no mention is made, of course, as to why his body could not have been buried. Were all nearby cemeteries filled? And the question, “Why were the rest of the dead bodies of the other Muslims who were killed in the raid also not buried at sea?” has neither been asked nor answered. The media simply keeps regurgitating the announcement that Navy SEALS killed bin Laden. And, of course, the one thing a burial at sea accomplishes is it circumvents any attempt by independent sources to confirm the true identity of bin Laden via a post burial examination.

Is Osama bin Laden really dead? I don’t think there is any question about it. In fact, bin Laden has been dead for several years. If readers will recall, this is the latest of several announcements by various government spokesmen that Osama bin Laden left the land of the living. As respected researcher Joel Skousen notes in his latest World Affairs Brief, no less than 9 public announcements of bin Laden’s demise have been made spanning the years 2001-2009.

In October 2002, Afghan President Hamid Karzai told CNN, “I would come to believe that [bin Laden] probably is dead.”

In November of 2005, Senator Harry Reid revealed that he was told Osama may have died in October of that year.

In September of 2006, French intelligence leaked a report suggesting Osama had died in Pakistan.

And in May of 2009, Pakistan President Asif Ali Zardari said, “I’ve said before that he [bin Laden]–I don’t think he’s alive.” He also said the head of US intelligence told him they [the US] hadn’t heard from Osama bin Laden in 7 years so they presumed him dead.”

Skousen also points out the fact that it is unfathomable that bin Laden could have remained alive and hiding out in caves and primitive safe houses for an extended period of time, because it was a well known fact that he suffered from acute kidney disease that required almost daily usage of a dialysis machine (which was NOT present in the home where the US government claimed he was shot). US intelligence personnel surely knew that bin Laden was treated at the American Hospital in Dubai in July of 2001 by Dr. Terry Callaway, and that CIA station chief Larry Mitchell met bin Laden in the hospital during the time he was admitted. In fact, French television and the Agence France Presse reported that bin Laden was hospitalized between July 4th and 14th of that year.

I certainly do not doubt that Navy SEALS killed someone during that raid. In all likelihood, it was a bin Laden look-alike who had outlived his usefulness. The official story of the raid has changed so many times and has so many holes in it, it is an embarrassment to the US national press corps that they have carried the story “as is” in such a careless and unprofessional manner. But, then again, the national press corps has been little more than a national propaganda machine for the federal government for decades, anyway. So, why should this story be any different?

At this point, I encourage readers to check out the following report that chronicles some of the more obvious discrepancies and laughable explanations of the government’s official story (or more appropriately, stories):

So, the obvious question that needs to be asked is, “What is to be gained by the announcement of this raid in which Osama bin Laden was supposedly killed?”

For one thing, this is going to make it extremely difficult for Republicans to beat President Barack Obama in the 2012 elections. Immediately following the raid’s announcement, Obama’s approval rating soared by almost 25 percentage points. And with an extremely weak GOP Presidential field (believe it or not, Republican Congressman Ron Paul actually fares better head-to-head against Obama than any other Republican candidate–but the Powers That Be (PTB) within the propaganda media and the GOP establishment will do everything in their power to prevent Paul from gaining the nomination), the “bin Laden factor” makes Obama almost unbeatable. As Skousen astutely asked, how many terrorists have Gingrich, Palin, or Huckabee killed?

However, the thing that benefits the most from this raid is America’s emerging police state, which is now strategically positioned to take another giant leap forward.

With bin Laden now declared “dead,” the US government will have to find another excuse to continue the “War On Terrorism.” Will US forces now pull out of Afghanistan? Not on your life! Literally! US forces are permanently embedded in the Middle East. They are never coming home. In fact, the US 2nd Marine Division is on alert for an insertion into Libya, and US attacks against Syria are soon to follow.

All the PTB need now is another 9/11-style attack, and the architects that are drawing up plans for America becoming a Gestapo-style police state will be free to launch their evil machinations almost at will. And revenge for the death of bin Laden will be the reason provided to the American public that will convince them to accept this next round of attacks against the Bill of Rights and America’s liberties.

While Americans are rejoicing over the death of Osama bin Laden, they need to be infuriated at the death of America, because that is what this so-called “War on Terror” is accomplishing.