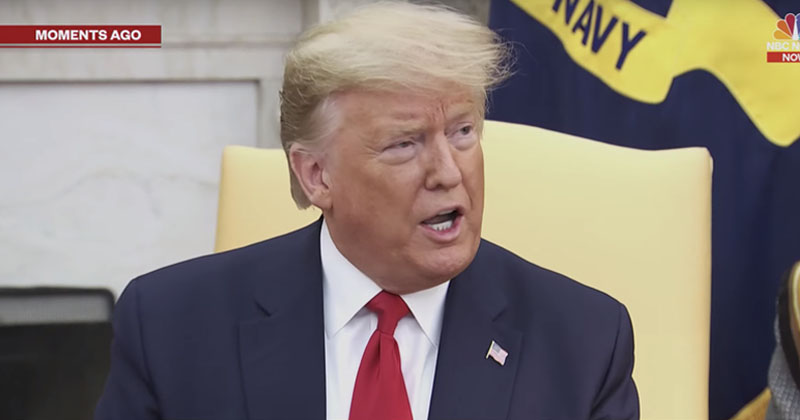 President Trump ripped into the Democrats and Deep State for perpetuating the Russia collusion hoax and impeachment coup.

During a bilateral meeting at the Oval Office with Ecuadorian President Lenin Moreno on Wednesday, Trump laid into the “corrupt” Democrats and their media accomplices for their roles in pushing the debunked Russia narrative and impeachment debacle.

When asked by a reporter what “lessons” he may have learned after getting impeached by the House Democrats, Trump replied: “That the Democrats are crooked.”

“They’ve got a lot of crooked things going,” he continued. “That they’re vicious, that they shouldn’t have brought impeachment, and that my poll numbers are ten points higher because of fake news like NBC, which reports the news very inaccurately – probably more inaccurately than CNN, if that’s possible – MSDNC, and if you take a look at NBC…no, I think they’re among the most dishonest reporters of the news.”

“It was a whole setup, it was a disgrace to our country, and everyone knows it too,” Trump added. “Including NBC which gives a lot of fake news. The fact is that Roger Stone was treated horribly, and so were many other people. Their lives were destroyed. And it turns out – you look at the FISA warrants and what just happened with FISA, where they found out it was fixed, that it was a dirty, rotten deal.”

Alex Jones breaks the news that a contact from inside The White House has confirmed Trump plans to pardon Roger Stone. Show your support with a “Roger Stone Did Nothing Wrong!” T-Shirt available in the Infowars store!