“If you offered to let me off this time on condition I am not any longer to speak my mind… I should say to you, ‘Men of Athens, I shall obey the Gods rather than you.'”

Free speech and satire are the bedrock principles upon which a free society is built. Even in the times of kings, the court jesters were often a veiled expression of popular dissent and a check on the royal echo chamber. And although the Magna Carta did not specifically guarantee free speech, it began the modern tradition of civil liberties that paved the way for the Bill of Rights more than 400 years later.

Here in the 21st century this pillar of western society is under intense attack. On one side from the self proclaimed jihadists who are suicidally sworn to protect from any “profane” images of Mohammed and on the other side from the multicultural apologists who would have the world bend to their will in the name of “tolerance.”

In recent history this campaign started with the Jyllands-Posten Muhammad cartoons controversy. The Danish Newspaper Jyllands-Posten posted 12 editorial cartoons featuring the image of the Islamic prophet Mohammed. The newspaper Published these images in an attempt to contribute to the debate about criticism of Islam and self-censorship. Muslim groups in Denmark were furious, and violent protests, demonstrations and riots erupted in Muslim countries. Some escalated into savage violence that resulted in more than 200 deaths, attacks on Danish and other European diplomatic missions, Christians, churches, and a major international boycott. Critics of the drawings often described them as racist, Islamaphobist and blasphemous to Muslims. Many boycotted the Danes and called for laws to censor images deemed by them to be insulting.

Numerous violent plots related to the cartoons have been discovered in the years since the publishing. These plans have primarily targeted editor Flemming Rose and the cartoonist Kurt Westergaard. Westergaard has been the subject of several violent attacks and is now under 24/7 police protection. In 2010, police foiled a 29-year-old radical’s plan to assassinate Westergaard in his home. The 28 year old Somalian stormed maniacally into his house brandishing an axe screaming, “We will get our revenge!”  In response to the attack Westerfaard said, “It is not right that you are threatened in your own country just for doing your job. That’s an absurdity that I have actually benefited from, because it grants me a certain defiance and stubbornness. I won’t stand for it. And that really reduces the fear a great deal.”

In November of 2004, Theodoor van Gogh, a direct relative of the famous painter who was murdered in cold blood by another indignant Islamist, was attacked and murdered in broad daylight by a Dutch-Moroccan Muslim. Theo, a critically acclaimed writer and filmmaker that had produced a thoughtful short film entitled Submission that criticized the treatment of women in Islam, was shot repeatedly and almost beheaded before finally being stabbed in the chest. A note that detailed the Muslim’s hysterical theological grievances was found pinned to Theo’s body.

The killer, Mohammed Bouyeri, was shot by dutch police during a chase which ended in his apprehension. He was found to have ties with the Dutch Islamist terror network named Hofstad. The murder sparked a violent storm of outrage and grief throughout the Netherlands. Flowers, notes, drawings and other expressions of mourning were left at the scene of the murder. And yet the Dutch Minister of Justice, Christian Donner, called for the strict Dutch blasphemy laws to be enforced harder.

In July  of 2001, the television cartoon South Park aired an episode called Super Best Friends. In it the founders of the world’s great religions including Mohammed team up for super-hero action. Mohammed (seen here) is depicted repeatedly throughout the show. This enraged Muslims worldwide and in response to the ensuing controversy it has been censored and has never aired again. For such a controversial show that is always crossing boundaries and reveling in its irreverent portrayals of popular people this was an unprecedented move and proves that this global stigma is a very powerful force. 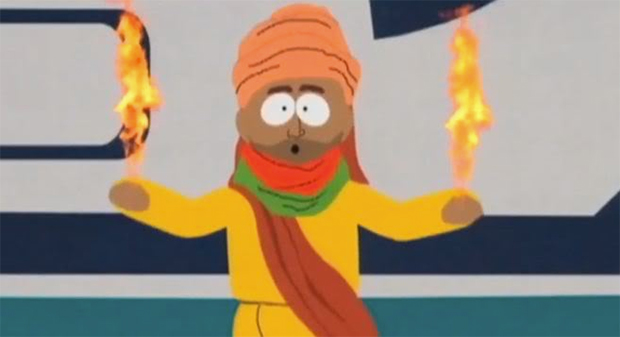 In 1997, an Israeli woman named Tatiana Soskin drew a caricature of Mohammed as a pig authoring the Koran and tried to display it in public in the city of Hebron. She was arrested, tried and sentenced to jail. None other that Prime Minister Benjamin Netanyahu apologized to the Mayor of Hebron, declaring that Tatiana’s drawing “contradicts the respect and admiration the Jewish religion has for the Islamic religion and its founder.” 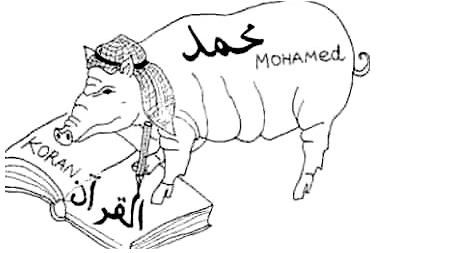 In 2002, the French publication Charlie Hebdo ran this panel by cartoonist Cabu. The sign translates as “Election of Miss Sack-of-Potatoes, organized by Mohammed, “who says “I choose the Beauty of Fontenay!” while drinking and smoking.

His words contain a French pun: “Belle-de-Fontenay,” a well-known type of French potato, originally from the Parisian suburb of Fontenay-sous-Bois which later saw unrest from Muslim immigrants during the riots of 2005. 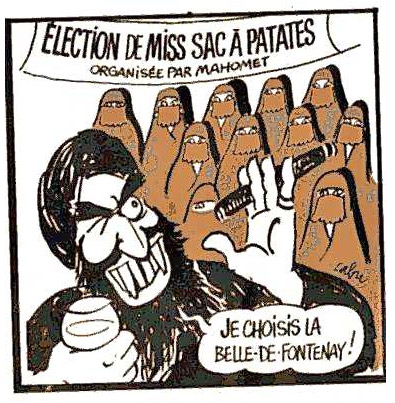 Yesterday the same french satire magazine Charlie Hebdo ( with the irreverently snarky tagline of “irresponsible Journalism” )  posted this cartoon in their twitter feed. 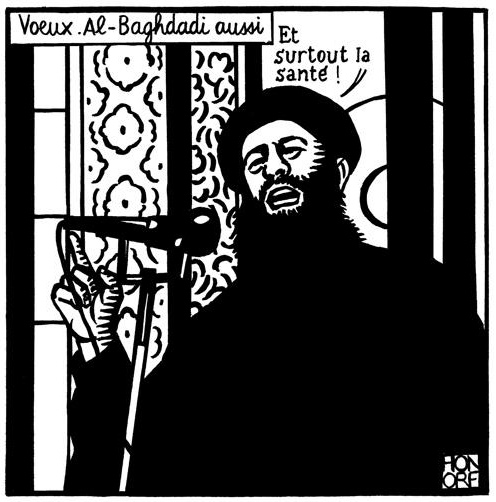 It shows the leader of Isis saying, “..and especially health,” as a good wish for 2015. Within a few hours masked gunmen stormed the building with military precision and executed 12 people including the editor and the cartoonist. While it is still not clear if this is an act by an enraged Muslim faction or a different group taking advantage of the absurd commandments to murder those who depict Muhammad, one thing is clear: Those who would seek to stifle free speech with cold blooded murder, whether for religious or political gain, are the sworn enemies of freedom and greater humankind. It is abhorrent that these acts continue to be perpetrated in the West, and we should punish these crimes with the harshest severity. The clash of cultures has long been harnessed to divide and conquer, but we must not allow the very basic foundations of our freedom to be assaulted in this manner. We must take all measures to ensure that every voice of dissent can be clearly heard or we will hurl humanity back into the dark ages where evil will rule and the slavery of the human race will begin in the mind and conquer the world.