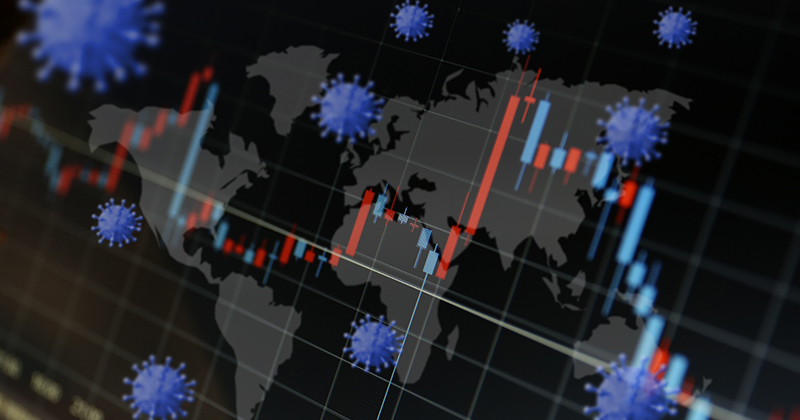 Since the end of World War II, have we ever seen the entire globe gripped by so much fear?

This week, the number of confirmed coronavirus cases in the U.S. and Europe has absolutely exploded, and authorities all over the western world are rushing to shut down public gatherings of all kinds.

The NCAA has banned fans from upcoming tournament games, the NBA just suspended the entire season because a Utah Jazz player tested positive, and dozens of other sporting events have been canceled all over the planet.

In both the U.S. and Europe, schools are being shut down for weeks, some universities are telling their students not to come back for the rest of the semester, and a whole host of concerts, conferences, festivals and religious gatherings are either being postponed or canceled altogether.

We have never seen anything like this before, and the implications are staggering.

Alex Jones breaks down the Dems who have publicly declared their intention to use the coronavirus pandemic as a means to wreck havock on the rights of American citizens.

Keeping everyone at home for a few weeks is one thing.

But what is going to happen if this pandemic just keeps growing for the rest of this calendar year or even longer?

According to NBC News, the attending physician of Congress believes that “70 million to 150 million people in the United States will become infected”…

Monahan made the comments to Senate staff during a closed-door meeting Tuesday afternoon, according to NBC News.

Right now, there are less than 2,000 confirmed cases in this country and fear is off the charts.

Can you imagine the societal meltdown that will ensue if 70 million Americans get infected?

Dr. Anthony Fauci is also warning that we we should expect to see “more cases” and that things will continue to “get worse”…

“I can say we will see more cases and things will get worse than they are right now,” Dr. Anthony Fauci, director of the National Institute of Allergy and Infectious Diseases, told the House Oversight and Reform Committee on Wednesday at a hearing on the nation’s preparedness for the outbreak.

Unfortunately, these sorts of warnings don’t hit home for many Americans until someone that they personally love is affected.

But now that Tom Hanks and his wife have both tested positive, a lot of people that previously did not take this outbreak seriously are now officially freaking out.

Tom Hanks is one of the most greatly loved actors in America, and this is going to be the moment when a lot of Americans finally wake up and realize that this virus is definitely not “like the flu”.

Over in Europe, things are actually quite a bit worse than they are in the United States right now.  Just like Italy, Denmark has just locked down the entire country, and German Chancellor Angela Merkel continues to warn that 70 percent of the German population could eventually become infected…

German Chancellor Angela Merkel has warned that up to 70% of the country’s population – some 58 million people – could contract the coronavirus.

Mrs Merkel made the stark prediction at a news conference on Wednesday alongside Health Minister Jens Spahn.

But it may take a couple of years to get to that number.

So what are we going to do?  Are we actually going to shut down the entire western world for the foreseeable future?

If you go look at the map that Johns Hopkins has put up, the numbers coming out of Europe right now are like something out of a science fiction movie.

And as I discussed yesterday, the U.S. is on the exact same trajectory.

This is definitely a virus that you want to avoid if at all possible.  In many instances it causes devastating damage to the lungs, and even if you survive your lungs may not ever fully recover.

One of the very first confirmed British cases said that the virus hit him “like a train” and had him “in blinding pain for weeks”.

Has the flu ever left you “in blinding pain for weeks”?

And he was one of the fortunate ones that survived.  For those that die, the suffering can be far worse.

I truly don’t understand why there are still people out there that are attempting to downplay this pandemic.  This is a truly insidious virus, and numerous experts are warning that it could eventually kill millions.

As I wrap up this article, I would like to share with you an excerpt from a firsthand account from an American that is right in the middle of the nightmare that is currently unfolding in Italy.  I think that you will find what Christina Higgins posted on her Facebook page to be quite sobering…

When Prime Minister Conte announced last night that the entire country, 60 million people, would go on lock down, the line that struck me most was “there is no more time.” Because to be clear, this national lock down, is a hail mary. What he means is that if the numbers of contagion do not start to go down, the system, Italy, will collapse.

Why? Today the ICUs in Lombardy are at capacity – more than capacity. They have begun to put ICU units in the hallways. If the numbers do not go down, the growth rate of contagion tells us that there will be thousands of people who in a matter of a week? two weeks? who will need care. What will happen when there are 100, or a 1000 people who need the hospital and only a few ICU places left?

On Monday a doctor wrote in the paper that they have begun to have to decide who lives and who dies when the patients show up in the emergency room, like what is done in war. This will only get worse.

There are a finite number of drs, nurses, medical staff and they are getting the virus. They have also been working non-stop, non-stop for days and days. What happens when the drs, nurses and medical staff are simply not able to care for the patients, when they are not there?

And finally for those who say that this is just something that happens to old people, starting yesterday the hospitals are reporting that younger and younger patients – 40, 45, 18, are coming in for treatment.

You have a chance to make a difference and stop the spread in your country. Push for the entire office to work at home today, cancel birthday parties, and other gatherings, stay home as much as you can. If you have a fever, any fever, stay home. Push for school closures, now. Anything you can do to stop the spread, because it is spreading in your communities – there is a two week incubation period – and if you do these things now you can buy your medical system time.

And for those who say it is not possible to close the schools, and do all these other things, locking down Italy was beyond anyone’s imagination a week ago.

Soon you will not have a choice, so do what you can now.

No matter how many reassuring press conferences our leaders hold, and no matter what moves global central banks make, most people are going to want to avoid places where they could become infected as long as this virus keeps spreading.

If our normal lives are interrupted for a few weeks, it ultimately won’t be that big of a deal.

But if this crisis just keeps going month after month, it will quickly bring us to the brink of societal collapse.

Let us pray for a miracle, because we definitely need one right now.