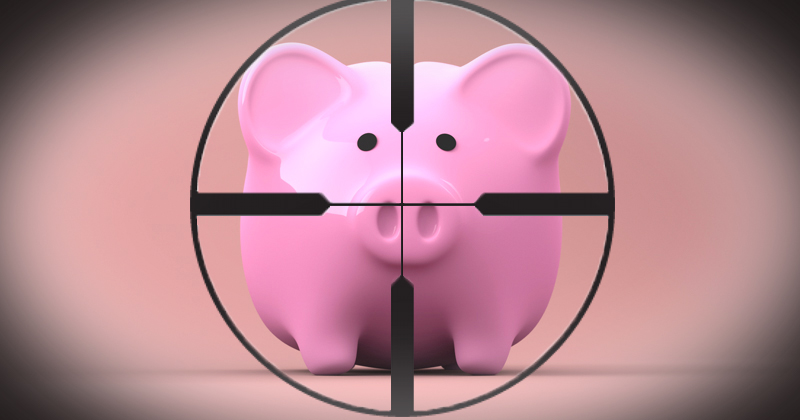 Authored by Andrew Moran via LibertyNation.com,

When any one of the plethora of bubbles burst – pick your poison – and the next financial crisis impacts Wall Street and Main Street, how will the central banks and federal governments react? They have fired all their unconventional rounds of bullets, from subzero interest rates to vast money-printing. One other proposal could conceivably be giving your deposits a haircut, much like what occurred in Cyprus following the recession. This dyspeptic vision is not hyperbole nor is it paranoia – the tariffs have raised the price of tinfoil! It is unfolding right now as our globalist overlords are executing, or at least entertaining, fiscal and monetary measures to confiscate your wealth – directly or indirectly.

Switzerland is one of the few European nations to record a federal budget surplus. The budget for the fiscal year 2020 will record a $615 million surplus, despite imposing pension and tax reforms that slashed revenues and raised spending. The Swiss government is handcuffed by a so-called debt brake, a balanced-budget amendment that mandates the budget to be in balance throughout the business cycle. This policy has decreased the debt-to-gross domestic product ratio to nearly 25%.

Although national debt levels are still at multi-decade highs, the fact that the government is taking red ink seriously should be music to the ears of fiscal conservatives. But to others, it is headache-inducing.

The Organization for Economic Cooperation and Development (OECD) published a new report that lamented on the nation’s unwillingness to spend like some of its European partners. Authors stated that the Swiss are saving too much and spending too little, despite possessing the third-highest gross domestic product (GDP) per capita of all OECD members. It asserted that policymakers could “increase expenditures” within the debt brake framework that “would serve monetary policy, and economic and social positive impact.”

There are a few other European states that are living within their means. Germany is projected to maintain its budget surplus for the next three years: 1.2% of GDP this year, 0.6% of GDP in 2020, and 0.2% in 2021. The Netherlands is also recording a surplus of 1.2%.

At a time when European Union members are in dire straits, you would think that they would be championed as model E.U. states. Not quite.

As Liberty Nation recently reported, European Central Bank (ECB) President Christine Lagarde bemoaned their surpluses, complaining that they would be better off spending the money on infrastructure and education. Desperate a modicum of growth, Lagarde is of the philosophy that the only way to grow an economy is through government intervention.

Unfortunately, this is now the hive-like opinion in the international monetary order. You better watch out. The globalists are coming for your savings – and they have already initiated the war on your piggy bank, emergency fund, and retirement investments.

In the immediate aftermath of the global financial crisis, central banks worldwide axed interest rates to historic lows. When the ZIRPs failed, some jurisdictions took it a step further and brought them into the subzero territory. Today, a handful of countries have adopted negative rates, and many are on the brink of slipping into this terrain.

The purpose was to push consumers into spending more and encourage financial institutions to lend at a greater rate. Interestingly enough, these efforts failed because citizens did the opposite: They saved more. Experts who studied the population of contrarians did so because subzero rates spurred a bearish sentiment on the economy.

One of these countries is Switzerland, which has maintained negative rates for nearly five years. The Swiss National Bank (SNBS) has called them “essential,” arguing that they are necessary to prevent further appreciation of the franc and to boost exports at a time of being hampered by global trade tensions and anemic economic growth in Europe. The private sector is not happy about it. A recent UBS survey found that two-thirds of businesses say they are concerned that these rates will hurt the domestic economy in the long-run and the cost of this measure will “outweigh their benefits overall.”

If you ask the new ECB chief, however, she would tell you that you should be grateful for leaders implementing negative rates:

“Would we not be in a situation today with much higher unemployment and a far lower growth rate, and isn’t it true that ultimately we have done the right thing to act in favor of jobs and growth rather than the protection of savers?

We should be happier to have a job than to have our savings protected. I think that it is in this spirit that monetary policy has been decided by my predecessors and I think they made quite a beneficial choice.”

Lagarde is a proponent of the NIRPs, championing the unconventional mechanism to achieve growth. Since the eurozone has barely cracked 2% GDP, many are anticipating that Lagarde will deepen negative rates during her term as president. Anytime she has mused on the subject, Lagarde has usually dismissed concerns about the saver, noting that they are also consumers, borrowers, and workers.

Unfortunately, this contempt for savers is commonplace because it is antithetical to the Keynesian approach of spending. Disciples of John Maynard Keynes will contend that consumption over saving should only happen during the bust phase of the business cycle, but if you peruse any opinion pieces by individuals subscribing to this ideology, you will only come across spending prescriptions for every type of economy – boom or bust. They dismiss the fact that capital accumulation, not consumption, creates wealth.

This myth originates from Keynes’ The General Theory and Treatise on Money, in which he posits that a saver is reducing the income of another person because he or she is not consuming the goods or services extended by somebody else. Put simply, he considered saving a self-defeating act.

“Saving is the act of the individual consumer and consists in the negative act of refraining from spending the whole of his current income on consumption,” he wrote.

The crusade against savers has been prevalent in the Democratic primary. The likes of Sen. Elizabeth Warren (D-MA) and Sen. Bernie Sanders (I-VT) have grieved about hoarders, particularly those who are the top 0.1% (no longer just the 1% anymore; likely because these two people are the 1%, too). The presidential candidates are perturbed that the supposed capital hoarders are not putting their fortunes into the economy. This is nonsense talk to justify their wealth confiscation policies, since the affluent are saving and investing, not just stuffing their money under mattresses.

Negative rates, higher taxes, and inflation – the statists are employing every measure to gain access to the fruits of your labor.

If it isn’t expanding the money supply that eats away at your hard-earned savings, then the Leviathan will imbibe your accrued capital through negative rates. When you factor in the elite’s appetite for the evisceration of cash and the integration of a cashless society, then you are imprisoned by the globalist wardens who now have you under their thumb at all times. Your wealth, your livelihood, and your personal life are now under the purview of the state. If you don’t like it, then you are out of luck. You have nowhere to go. The globalists have declared war on mom and pop savers, pillaging bank accounts and conquering our lives. Is there a chance for victory? As long as the omnipotent and iniquitous institutions remain in charge, optimism over sound economics can only fade to black.