There is no doubt that the radiation levels we’ve encountered during our tour of the West Coast should be of concern to everyone. The equipment we’re using is designed to detect particles of ionizing radiation. According to the Environmental Protection Agency, “any living tissue in the human body can be damaged by ionizing radiation in a unique manner.” 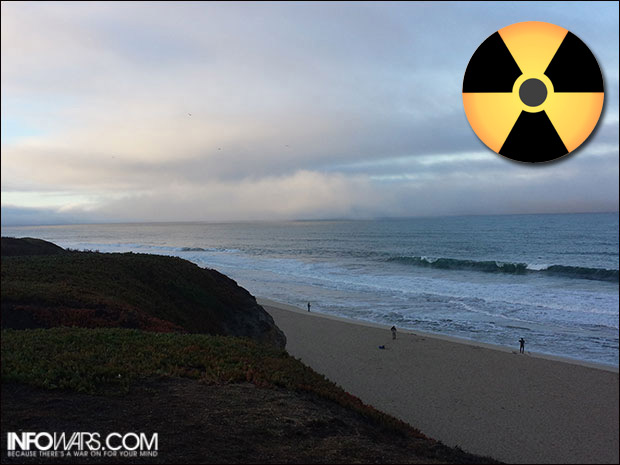 “The body attempts to repair the damage, but sometimes the damage is of a nature that cannot be repaired or it is too severe or widespread to be repaired,” the EPA’s FAQ page on the health effects of radiation states. The agency also admits that ionizing radiation causes cancer and can spur genetic mutations which can be passed on to offspring.

This is bad news. Normal background radiation levels should typically hover below or around 30 counts per minute. It is concerning that up and down the West Coast, nearly every place monitored tested well above this level, the highest concentration of course being found at Surfer’s Beach in Half Moon Bay, California and further south.

The readings below document locations investigated from Half Moon Bay up to Portland, Oregon:

We also found that the California coastline south of Half Moon Bay had increased radiation levels three times higher than what is considered to be normal, with a reading of 112 CPM taken at Salinas River State Beach.

Also bad news is the fact that residents are almost completely oblivious to the threatening dangers surrounding them, in part due to media brainwashing and the downplaying of the significance of the fallout from the Fukushima nuclear disaster. As far as we can tell, Infowars is the only media organization taking the initiative to conduct readings and report the actual facts.

Additionally, there is the matter of bioaccumulation to worry about. As the beaches and local communities continue being showered with high radiation, the real issue is that bioaccumulation is occurring in sea life, meaning that radiation is building up and accumulating in the foods many people eat.

However, there is also some good news to report.

The extremely high level of radiation encountered at Surfer’s Beach does not appear to be routine among other areas of the western coastline, according to our measurements.

Also, fish we tested at local markets showed only slightly elevated levels of radiation, though previous studies following Fukushima have indicated an across the board increase in radiation levels when it comes to seafood supplies.

However there were still fish that tested higher. For instance a wild Tako imported from Japan gave a reading of 44 CPM, in addition to an albacore tuna, imported from Canada, which also read 44 CPM.

In Crescent City, California, fresh crabs measured at 56 CPM, and two small croakers a man caught off the Hartford Pier in Avila Bay, near the Diablo Canyon nuclear facility, scanned in at 60 CPM, double the standard 30 CPM for the Half Moon Bay area.

We were unable, however, to test what is believed to be one of the most highly irradiated fish in the ocean, the blue fin tuna. One fish market owner in Eureka, California told us that he specifically doesn’t carry that type of fish due to public concerns about radiation.

It is also no exaggeration that ambient radiation readings taken at almost every location climbed into the 70s, a startling indicator that the ionizing radiation is unknowingly and constantly bombarding the people of California.

In reality, there is no real good news about the radiation levels we’re finding. As documented, very few places and foods are giving low readings.

We encourage everyone to independently research the unusual levels of radiation which the federal government and even academic officialdom say is perfectly safe. As the EPA admits on their own site, “there is no firm basis for setting a ‘safe’ level of exposure above background” levels.