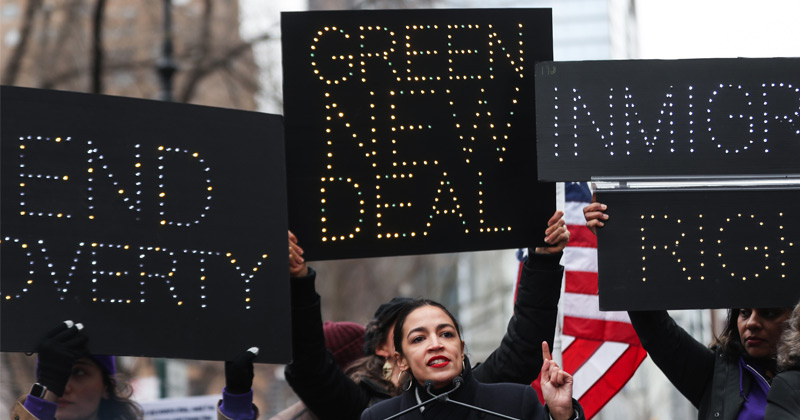 One of the hottest topics in policy wonk circles is the “Green New Deal,” spearheaded by the rising star of the progressive Left, Alexandria Ocasio-Cortez.

In my previous post, I explained that the entire premise of a current New Deal—whether green, red, or blue—was flawed. Even on standard Keynesian terms, it makes no sense to embark on a $1 trillion government spending program with official unemployment below 4 percent and the Fed raising rates to rein in price inflation. Worse, historically the actual New Deal under Franklin Roosevelt prolonged the nation’s suffering, making the Great Depression linger for a decade. Finally, I pointed out that the supporters of a Green New Deal weren’t merely interested in mitigating climate change: they quite openly announce that they will use the plan as a vehicle for transforming society according to the standard progressive wish list.

In the present post, I’ll critically analyze some of the specific policy goals listed in the draft text calling for a creation of a select committee to craft a Green New Deal. The various proposals would waste enormous sums of money in pursuit of impossible goals that would raise energy prices and hurt consumers. Even if one believes that carbon dioxide emissions constitute a “negative externality,” the measures in the proposed Green New Deal would achieve emission reductions at a much higher cost than necessary. And we see once again that the progressive Left does not think a simple “price on carbon” is enough to achieve their agenda. Conservatives and libertarians should therefore be under no illusions when the idea of a “carbon tax deal” is floated.

[Question:] Why do we need a sweeping Green New Deal investment program? Why can’t we just rely on regulations and taxes alone, such as a carbon tax or an eventual ban on fossil fuels?

Regulations and taxes can, indeed, change some behavior. It’s certainly possible to argue that, if we had put in place targeted regulations and progressively increasing carbon and similar taxes several decades ago, the economy could have transformed itself by now. But whether or not that is true, we did not do that, and now time has run out.

Given the magnitude of the current challenge, the tools of regulation and taxation, used in isolation, will not be enough to quickly and smoothly accomplish the transformation that we need to see.

Simply put, we don’t need to just stop doing some things we are doing (like using fossil fuels for energy needs); we also need to start doing new things (like overhauling whole industries or retrofitting all buildings to be energy efficient). Starting to do new things requires some upfront investment…

We’re not saying that there is no place for regulation and taxes (and these will continue to be important tools); we’re saying we need to add some new tools to the toolkit. [Green New Deal “draft text’]

The above excerpt confirms what I stressed in my Part 1 of this series, in reference to Naomi Klein’s discussion: The proponents of government intervention on the progressive Left have quite definitively rejected the notion that a mere carbon tax would be enough to deal with climate change, in their book.

Don’t get me wrong, they want to impose a stiff tax on carbon dioxide emissions—as well as a 70 percent tax on high income earners, as Ocasio-Cortez revealed in a recent interview. But the point is, no libertarian or conservative should go along with a “deal” that ostensibly gets rid of other energy and transportation regulations in exchange for a carbon tax. The orthodox position among progressives is that such a deal would fall far short of the necessary climate goals to avoid catastrophe. Such a deal wouldn’t be acceptable to them, even in principle, let alone in practice.

A Green New Deal Would Be Incredibly Wasteful

The Green New Dealers’ desire for top-down regulations and massive new spending programs not only shows the futility of a carbon tax deal, it also underscores just how wasteful the program would be. Even if one believed in a “negative externality” from greenhouse gas emissions, there is no reason to suppose that policymakers have the knowledge or the incentives to correctly pick the proper ways in which the economy should adapt.

Especially when we are realistic about the political process, it should be obvious that funneling more than one trillion dollars in green “investment” spending through Washington will involve a gross misallocation of resources. For example, the draft text’s call for “retrofitting all buildings to be energy efficient” is a blank check to funnel money into the coffers of politically powerful groups in the construction industry. Anyone who thinks these funds will be spent according to the “social cost of carbon” needs to watch a few episodes of House of Cards.

In his recent endorsement of the Green New Deal, Paul Krugman confirms that “it should emphasize investments and subsidies, not carbon taxes.” Ironically, Krugman and I for once agree that a political deal between conservatives and progressives is a no-go. As he puts it: “[C]laims that a carbon tax high enough to make a meaningful difference would attract significant bipartisan support are a fantasy at best, a fossil-fuel-industry ploy to avoid major action at worst.”

After throwing carbon taxes under the bus, Krugman moves on to argue why top-down regulations and spending programs can achieve significant emission cuts without imposing too much pain on ordinary Americans.

How is this possible? Krugman explains:

The majority of U.S. greenhouse gas emissions come from electricity generation and transportation. We could cut generation-related emissions by two-thirds or more simply by ending the use of coal and making more use of renewables (whose prices have fallen drastically), without requiring that Americans consume less power. We could almost surely reduce transportation emissions by a comparable amount by raising mileage and increasing the use of electric vehicles, even if we didn’t reduce the number of miles we drive each year.

Krugman is quite flippant in his above quotation with the word “simply,” as if eliminating coal—which in 2017 provided thirty percent of U.S. electricity—is no big deal. Krugman says we can simply “mak[e] more use of renewables,” without telling his readers that in 2017 (non-hydro) renewables accounted for less than 10 percent of electricity.

Regarding fuel economy, the simple fact is that in order for vehicles to achieve more miles to the gallon, automakers must make them more expensive, but also lighter and smaller. That means more Americans dying in car accidents than would otherwise be the case. How big a deal is this? Reputable studies have estimated that CAFE standards have caused anywhere from 40,000 – 125,000 excess vehicle fatalities.

Of course, proponents of stricter CAFE standards could quibble with these numbers, but the more significant point is that neither Ocasio-Cortez nor Krugman even admit that there is a tradeoff. They speak of cranking up mileage standards as if it’s a mere technical problem, without reckoning the tremendous human cost.

A so-called Green New Deal is aptly named, in the sense that the original New Deal was a massive boondoggle that restricted individual liberty and crippled economic growth. Besides revealing their plans for massive spending and inefficient regulations, the discussion of a Green New Deal indicates that there is no room for a “carbon tax deal” with conservatives.

Part one of this series is available here.

The many climate predictions from the left over the past several decades have proven themselves to be completely false primarily because leftists ignore the impact of the sun on climate.