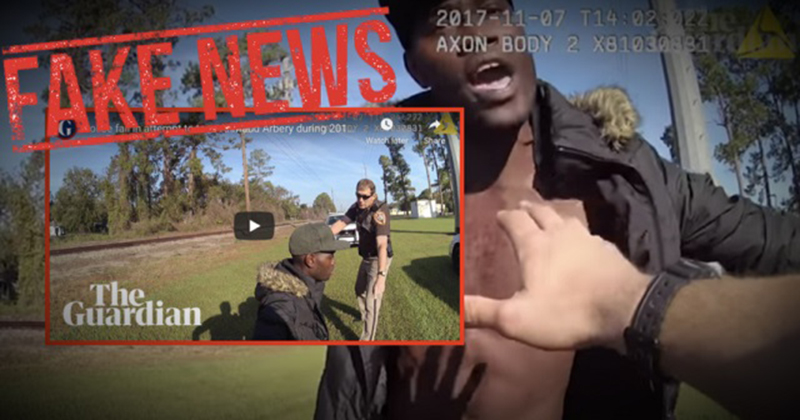 The Guardian committed journalistic fraud on Monday by releasing deceptively edited footage of Ahmaud Arbery being detained on November 7, 2017 which cut out evidence of him threatening a cop.

You can see in the unedited video below that Arbery tells the cop, “Bitch you hit me with that shit bitch you gone be fucked up.”

The Guardian surgically edited that one line out of their interaction to give the false impression he wasn’t being aggressive:

I encourage you to watch both videos in full. The Guardian also did not show how Arbery was allowed to leave the scene (and leave his car behind) without any issue after the cop told him he had an expired licence.

The deceptive edit was first reported on by The Red Elephants.

“Not only did The Guardian edit the footage, omitting Arbery’s aggression, but the media outlet turned off the comments section so no-one would be able to call them out for their clearly edited version of the incident,” The Red Elephants noted.

The Guardian’s heavily edited video quickly amassed over 300,000 views. The Guardian did upload the unedited footage as well but they made it “unlisted” (meaning it’s hidden from YouTube search results) and made it so you could only see it if you clicked through their biased article, which clearly no one is doing because it has only 14,375 views. The media is clearly waging a sustained campaign to taint the jury pool and deny the McMichaels a fair trial, just as they did with “The Trayvon Hoax.”

An additional video was also just released showing Arbery getting arrested in December 2017 for stealing a 65-inch TV from Walmart.

The Guardian did not include the Walmart arrest video in their article nor did they share it with their 1.1 million YouTube subscribers.