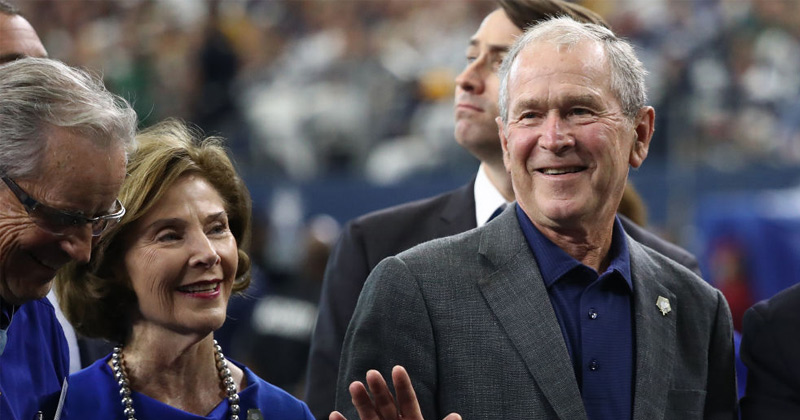 Former president George W. Bush has returned to the spotlight to give moral guidance to America in these troubled times.

In a statement released on Tuesday, Bush announced that he was “anguished” by the “brutal suffocation” of George Floyd and declared that “lasting peace in our communities requires truly equal justice. The rule of law ultimately depends on the fairness and legitimacy of the legal system. And achieving justice for all is the duty of all.”

Bush’s declaration was greeted with thunderous applause by the usual suspects who portray him as the virtuous Republican in contrast to Trump. While the media portrays Bush’s pious piffle as a visionary triumph of principle, Americans need to vividly recall the lies and atrocities that permeated his eight years as president.

In an October 2017 speech in a “national forum on liberty” at the George W. Bush Institute in New York City, Bush bemoaned that “Our politics seems more vulnerable to conspiracy theories and outright fabrication.” Coming from Bush, this had as much credibility as former president Bill Clinton bewailing the decline of chastity.

Most media coverage of Bush nowadays either ignores the falsehoods he used to take America to war in Iraq or portrays him as a good man who received incorrect information. But Bush was lying from the get-go on Iraq and was determined to drag the nation into another Middle East war. From January 2003 onwards, Bush constantly portrayed the US as an innocent victim of Saddam Hussein’s imminent aggression and repeatedly claimed that war was being “forced upon us.” That was never the case. As the Center for Public Integrity reported, Bush made “232 false statements about weapons of mass destruction in Iraq and another 28 false statements about Iraq’s links to Al Qaeda.” As the lies by which he sold the Iraq War unraveled, Bush resorted to vilifying critics as traitors in a 2006 speech to the Veterans of Foreign Wars.

Bush’s lies led to the killing of more than four thousand American troops and hundreds of thousands of Iraqi civilians. But since those folks are dead and gone anyhow, the media instead lauds Bush’s selection to be in a Kennedy Center art show displaying his borderline primitive oil paintings.

In February 2018, Bush was paid lavishly to give a prodemocracy speech in the United Arab Emirates, ruled by a notorious Arab dictatorship. He proclaimed: “Our democracy is only as good as people trust the results.” He openly fretted about Russian “meddling” in the 2016 US election.

But when he was president, Bush acted as if the United States were entitled to intervene in any foreign election he pleased. He boasted in 2005 that his administration had budgeted almost $5 billion “for programs to support democratic change around the world,” much of which was spent on tampering with foreign vote totals. When Iraq held elections in 2005, Bush approved a massive covert aid program for pro-American Iraqi parties. The Bush administration spent over $65 million to boost their favored candidate in the 2004 Ukraine election. Yet, with boundless hypocrisy, Bush proclaimed that “any (Ukrainian) election…ought to be free from any foreign influence.” US government-financed organizations helped spur coups in Venezuela in 2002 and Haiti in 2004. Both of those nations, along with Ukraine, remain political train wrecks.

In that October 2017 New York speech, Bush proclaimed: “No democracy pretends to be a tyranny.” But ravaging the Constitution was apparently part of his job description when he was president. Shortly after 9-11, Bush turned back the clock to before 1215 (when the Magna Carta was signed), formally suspending habeas corpus and claiming a prerogative to imprison indefinitely anyone he labeled a terrorist suspect. In 2002, Justice Department lawyers informed Bush that the president was entitled to violate the law during wartime—and the war on terror was expected to continue indefinitely. In 2004, Bush White House counsel Alberto Gonzales formally asserted a “commander-in-chief override power” entitling presidents to ignore the Bill of Rights.

Under Bush, the US government embraced barbaric practices which did more to destroy America’s moral credibility than all of Trump’s tweets combined. Bush’s “enhanced interrogation” regime included endless high-volume repetition of a Meow Mix cat food commercial at Guantanamo, head slapping, waterboarding, exposure to frigid temperatures, and manacling for many hours in stress positions. After the Supreme Court rebuffed some of Bush’s power grabs in 2006, he pushed through Congress a bill that retroactively legalized torture—one of the worst legislative disgraces since the Fugitive Slave Act of 1850. During his years in the White House, Bush perennially denied that he had approved torture. But in 2010, during an author tour to promote his new memoir, he bragged about approving waterboarding for terrorist suspects.

Is Bush nominating himself to be the nation’s racial healer? When he was president, Bush inflicted more financial ruin on blacks than any president since Woodrow Wilson (who brought Jim Crow barbarities to the federal government). Bush trumpeted his plans to close the gap between black and white homeownership rates and promised in 2002 to “use the mighty muscle of the federal government” to solve the problem. Bush was determined to end the bias against people who wanted to buy a home but had no money. Congress passed Bush’s American Dream Downpayment Act in 2003, authorizing federal handouts to first-time homebuyers of up to $10,000 or 6 percent of the home’s purchase price. Bush also swayed Congress to permit the Federal Housing Administration to make no–down payment loans to low-income Americans. Bush proclaimed: “Core American values of individuality, thrift, responsibility, and self-reliance are embodied in homeownership.” In Bush’s eyes, self-reliance was so wonderful that the government should subsidize it. And it didn’t matter whether recipients were creditworthy, because politicians meant well. Bush’s 2004 reelection campaign trumpeted his down payment giveaways, a shining example of “compassionate conservatism.”

Thanks in large part to his policies, minority households saw the fastest growth in homeownership leading up to the 2007 recession. The housing collapse ravaged the net worth of black and Hispanic households. “The implosion of the subprime lending market has left a scar on the finances of black Americans—one that not only has wiped out a generation of economic progress but could leave them at a financial disadvantage for decades,” the Washington Post reported in 2012. The median net worth for Hispanic households declined by 66 percent between 2005 and 2009. That devastation was aptly described in a 2017 federal appeals court dissenting opinion as “wrecking ball benevolence” (quoting a 2004 Barron’s op-ed I wrote). But almost none of the media coverage of the ex-president reminds people of the economic carnage of this Bush vote-buying binge.

It is possible to condemn police brutality and, even more importantly, the evil laws and judicial doctrines that enable police to tyrannize other Americans without any help from a demagogic ex-president who ravaged our rights, liberties, and peace. As I commented in an August 2003 USA Today op-ed, “Whether Bush and his appointees will be held personally liable for their [Iraq War] falsehoods is a grave test for American democracy.” The revival of Bush’s reputation vivifies how our political media system failed that test. As long as George Bush doesn’t turn himself in for committing war crimes, all of his talk about “achieving justice for all” is rubbish.