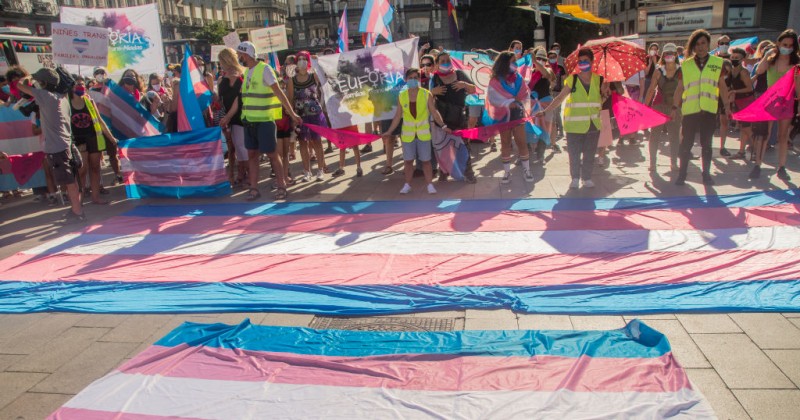 It sounds insane to say, but the party that once rallied against gay conversion therapy is coming shockingly close to promoting it themselves. All under the guise of supporting the trans community.

Suck the d**k, bigot. No, really! In today’s increasingly strange world, in order to show full allegiance to those who tick the final letter of the LGBT acronym, one must forgo all dating preferences and swallow their pride – or something else – to prove they are true allies.

A fringe belief is gaining traction, and previously well-respected publications such as the BBC are now promoting people who present the idea that ‘genital preferences’ are transphobic. In an article titled ‘The black transgender push to keep the fight alive at LGBT Pride’, non-trans gay men are called ‘transphobic’ for not wanting to date trans men. Aka, biological females.

Only in current times can gays come under attack for not liking vagina, all in the name of progressivism!

Elsewhere, on social media, more and more people are screaming to the void that those who don’t date trans women are also transphobic. In 2019, Veronica Ivy, formerly known as Rachel McKinnon, the trans cyclist infamous for demolishing records, came out and claimed that any sexuality outside of pansexuality is immoral.

This is conversion therapy for the modern age.

not wanting to date trans women stems from y’all not viewing them as “real” women… so yes your “preference” is transphobic.

Growing up as a gay youth, I always aligned with the left in regards to their fight against conversion therapy and their belief that sexuality isn’t a choice. Today I still maintain those views. What gender and genitals someone is attracted to is just what someone is attracted to, it simply will not be forcefully changed. But to the new left, sexuality is akin to bigotry, and one must be open to all genders lest they be seen as hateful.

Genital “preferences” is manipulative language suggesting we can change our attractions. Sexual orientation is immutable. pic.twitter.com/iK4Sn6Tg1e

Have I mentioned that this is insane?

Taking it further, it is progressive seppuku. Ideological suicide of the highest order that will only cause backlash and fiery anger in return. It is as if LGBT activists want to be hated, because this newfound push to convert people toward sexualities they don’t otherwise identify with is only going to create resentment. Resentment which in the end will diminish the standing of trans people to the public at large.

Nobody wants to be called a bigot, more so if they’re, well… not bigoted, and labeling gay or straight people as transphobic because of genital preferences is simply going to create actual bigots as people begin to look down on trans people and avoid any association with them.

I got cancelled out of work that was going to me after young "wokes" in the establishment were horrified that I said a lesbian is not a bigot if she does not want to have sex with a person with a penis…merely a LESBIAN.

The left has taken horseshoe theory to its limit, and now if someone doesn’t want to guzzle my you know what, well then they’re transphobic too. If I was on the outside looking in, I wouldn’t want to associate with people like me either.

Another horrifying aspect to this is how close they are veering toward being pro-rape. This is emotional manipulation in order to force people into having sex with others. Please explain how this doesn’t fall under that umbrella. So kudos internet progressives, you played yourselves and shot countless others in the foot while doing so. Attraction isn’t a choice, but there is one choice you can make, and that is to leave. Politely exit public discourse so that the rational people among us can clean up your mess.