President George Bush, President Barack Obama, and presidential hopeful Mitt Romney all work for the exact same handful of corporate-financier interests. While they vary in how they dress up their methods of carrying out what is essentially a singular agenda, there is glaring continuity from one administration to the next in a process analogous to a corporate spokesman presenting the agenda of the board of directors. Changing spokesmen doesn’t change the agenda of the board of directors.

While the corporate media focuses on non-issues, and political pundits accentuate petty political rivalries between the “left” and the “right,” a look deeper into presidential cabinets and the authors of domestic and foreign policy reveals just how accurate this analogy is and who sits on the “board of directors.”

Image: Professional spokesmen, representative not of the American people but of Fortune 500 multinational corporations and banks. Since the time of JP Morgan 100 years ago, the corporate-financier elite saw themselves as being above government, and national sovereignty as merely a regulatory obstacle they could lobby, bribe, and manipulate out of existence. In the past 100 years, the monied elite have gone from manipulating the presidency to now reducing the office to a public relations functionary of their collective interests.

George Bush’s cabinet consisted of representatives from FedEx, Boeing, the Council on Foreign Relations, big-oil’s Belfer Center at Harvard, the Center for Strategic and International Studies (CSIS), Circuit City, Verizon, Cerberus Capital Management, Goldman Sachs, and the RAND Corporation, among many others. 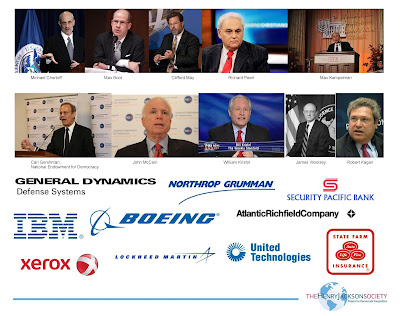 His foreign policy was overtly dictated by “Neo-Conservatives” including Richard Perle, Dick Cheney, Donald Rumsfeld, Jeane Kirkpatrick, Paul Wolfowitz, James Woolsey, Richard Armitage, Zalmay Khalilzad, Elliot Abrams, Frank Gaffney, Eliot Cohen, John Bolton, Robert Kagan, Francis Fukuyama, William Kristol, and Max Boot – all of whom hold memberships within a myriad of Fortune 500-funded think-tanks that to this day still direct US foreign policy – even under a “liberal” president. These include the Brookings Institution, the International Crisis Group, the Foreign Policy Initiative, the Henry Jackson Society, the Council on Foreign Relations, and many more. 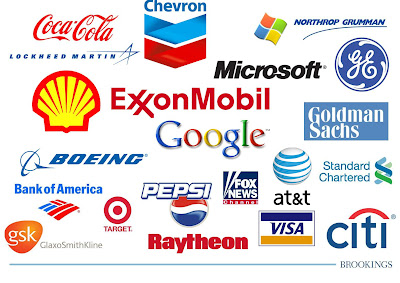 Image: A visual representation of some of the Brookings Institution’s corporate sponsors. Brookings is by no means an exception, but rather represents the incestuous relationship between US foreign and domestic policy making and the Fortune 500 found in every major “think-tank.” Elected US representatives charged with legislative duties, merely rubber stamp the papers and policies drawn up in these think-tanks.

A quick look at their board of directors reveals they are in fact drawn from big-oil, big-banking, defense contracting boards of directors, Neo-Conservative warmongering think-tanks, corporate lobbyists, and US State Department functionaries, past and present. 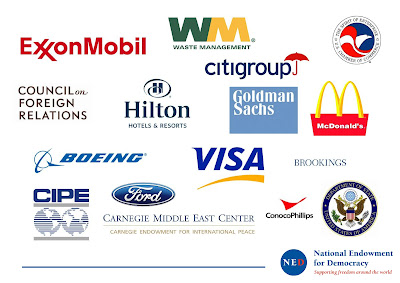 Image: A visual representation of the National Endowment for Democracy’s corporate-financier ties. It is not freedom they are interested in “supporting around the world,” but rather the interests of the corporations and institutions their board of directors represents.

NED was central in funding, training, and directing mobs of protesters across the Arab World during the 2011 US-engineered “Arab Spring,” only to see US proxies put into power where these mobs successfully toppled governments or led to violence and foreign military intervention that successfully implemented regime change. Tunisia and Libya both have overt, long-time associates of the West now in power, while similar proxies are fighting to take power in Egypt as well as battling for control over Syria. It then becomes obvious that it is not “freedom” NED is supporting worldwide, but rather the corporate-financier hegemony of the Fortune 500. 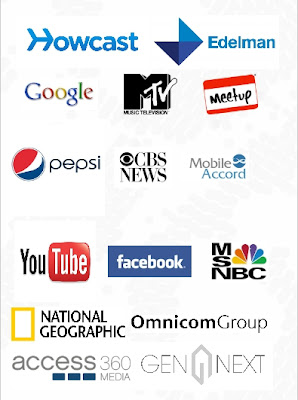 Image: NED, Freedom House, and the US State Department don’t just reflect the interests of the Fortune 500; they actively carry them out, many times using the resources and reach of these very interests to implement global policy. The Alliance for Youth Movements (AYM), starting in 2008 began recruiting, networking, training, funding, and equipping armies of “activists” from around the world to prepare for the “spontaneous” Arab Spring in 2011.

And the very shell organizations created to train NED’s mobs, including the US State Department’s Alliance for Youth Movements (AYM), was likewise funded by a myriad of Fortune 500 corporate-financier interests and attended and directed by representatives of these corporate interests.

The various business councils within the US Chamber of Commerce are also directed by the very same corporate interests directing both the US Presidency and carrying out their agenda through US-funded organizations like NED. The US-Qatar Business Council is one such example, whose representatives sit on the Washington D.C. based Middle East Policy Council alongside the UN’s Karen Koning AbuZayd. AbuZayd was charged with compiling human rights reports in regards to Syria. Clearly she is the subject of a gross conflict of interests exposing yet again how US and even Western policy is not directed by presidents, prime ministers, or legislative branches, but rather by cadres of corporate-financiers and their representatives who have infiltrated every institution in Western society and even contrived a few of their own to perpetuate their agenda. 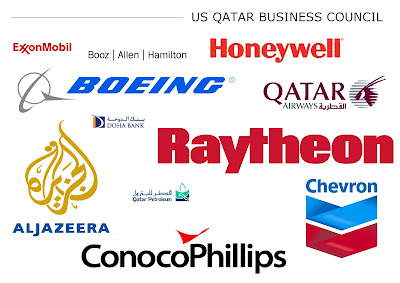 While there are a number of reasons to vote – including to simply write in the names of candidates to show dissatisfaction with the predetermined choices presented before us – we must recognize that voting alone will not change anything. And as the Occupy Wall Street movement has taught us, while our leaders demand nations like Libya and Syria allow their people to roam the streets armed and terrorizing the population, they have no intention of allowing even peaceful protests to take place back at home.

The solution is to identify and undermine the very source of power driving these world-spanning corporate-financier interests. One needs not travel further in search of this source of power than their own bathroom mirror. It is we the people, who on a daily basis, feed this monolithic corporate-financier machine of domination, exploitation, and destruction. And we need not do more than simply withdraw the time, money, energy, and attention we pay into this machine on a daily basis. We can begin by eliminating from our lives entirely the unnecessary amenities we purchase from this machine. This includes junk-food like that peddled by Pepsi Co., Coca-Cola, and the mega-chain restaurants, cafes, and fast food outlets spanning the world.

We can then begin devising local alternatives to replace these amenities, and eventually the necessities. We need not live a life of austerity or of want in the wake of deciding to boycott entirely the Fortune 500. We can leverage education, technology, and ingenuity to devise alternatives that not only match, but exceed the quality and comfort provided to us by these mega-multinationals.

While the system wants you to vote in their elections, you would be better served to instead vote with your wallet, time, energy, and attention. Don’t be drawn into the establishment’s circular debates, distractions, and especially the charade of predetermined elections. Regardless of who wins, Obama or Romney, the Fortune 500 will have a professional spokesman to present their collective agenda to the public under the guise of “democracy.” America, and the West in general, is run by the Fortune 500; they were your last president or prime minister, they will be your next president or prime minister.

If this dissatisfies you – boycott them and put them out of business.