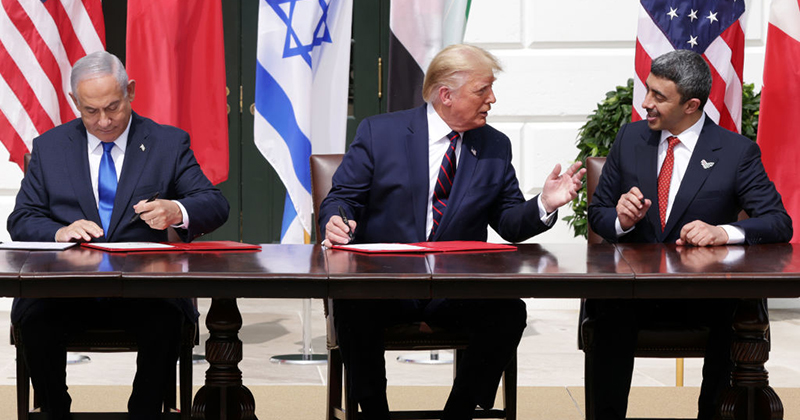 The historic agreement that Israel, the United Arab Emirates and Bahrain just signed is being hailed as a major leap toward lasting peace in the Middle East.

But the United Arab Emirates and Bahrain are not exactly the major players in the region, and what Israel had to give up in order to get these two Arab nations to “normalize relations” has a lot of people scratching their heads.

First of all, annexation of any territory in Judea and Samaria has now been put on hold indefinitely.

A history day for America, Israel, United Arab Emirates and Bahrain as the four nations ink an important peace deal at the White House as other countries are thinking about joining as well. President Trump is the peacetime President and this is more evidence. Peace in the Middle East could become possible with deals like this.

Unfortunately, very few are talking about the deeper implications of this agreement.  Instead, just about everyone seems extremely excited that “peace” has been achieved…

Israeli Prime Minister Benjamin Netanyahu and the foreign ministers of the United Arab Emirates and Bahrain signed the accords – written in English, Hebrew and Arabic – marking a major geopolitical shift in the Middle East and giving Trump a platform as peacemaker as he heads into the fall reelection campaign.

If you read mainstream media accounts, this treaty sounds absolutely wonderful.  We are being told that as a result of this agreement Israel, the United Arab Emirates and Bahrain “will establish embassies, exchange ambassadors and cooperate on a broad range of issues, from trade to health care to security”.

All of that sounds great, and none of those developments should upset anyone.

And if that was all that the agreement covered, there wouldn’t be a problem.

In the end, we should all want peace, and Israeli Prime Minister Benjamin Netanyahu used the word “peace” repeatedly during his remarks at the signing ceremony in Washington…

“To all of Israel’s friends in the Middle East – those who are with us today and those who will join us tomorrow – I say, salaam aleichem, peace unto thee, Shalom,” he continued.

“The blessings of peace that we make today will be enormous,” he continued, “first because this peace will eventually expand to include other Arab states, and ultimately, it can end the Arab-Israel conflict once and for all.”

“For too long, the Middle East has been set back by conflict and mistrust, causing untold destruction and thwarting the potential of generations of our best and brightest,” said Abdullatif bin Rashid Al Zayani, Bahrain’s foreign affairs minister. “Now, I’m convinced. We have the opportunity to change that.”

But at what price has “peace” been achieved?

According to the Jerusalem Post, the document specifically requires Israel to work toward “a negotiated solution to the Israeli-Palestinian conflict that meets the legitimate needs and aspirations of both peoples”…

The “Treaty of Peace, Diplomatic Relations and Full Normalization Between the United Arab Emirates and The State of Israel” recalls the ceremony in the White House in January, in which US President Donald Trump presented his peace plan and commits the sides to the treaty to “continuing their efforts to achieve a just, comprehensive, realistic and enduring solution to the Israeli-Palestinian conflict.”
It also commits them “to working together to realize a negotiated solution to the Israeli-Palestinian conflict that meets the legitimate needs and aspirations of both peoples, and to advance comprehensive Middle East peace, stability and prosperity.”

The Palestinians simply would not accept anything short of a formal Palestinian state as a “negotiated solution”, and so many conservatives in Israel are wondering why Netanyahu would possibly agree to this.

A Palestinian state has been referenced in the US brokered Abraham Accord signed between Israel and the United Arab Emirates on Tuesday, said Anwar Gargash, the UAE Minister of State for Foreign Affairs.

Prime Minister Benjamin Netanyahu has been under pressure from the Israeli right wing not to do anything that would cement recognition of a Palestinian state but Gargash clarified that the document briefly mentions a two-state resolution of the Israeli-Palestinian conflict, although the document deals largely with the bilateral relations between Israel and the UAE.

If Israel is willing to go this far just to achieve “peace” with the United Arab Emirates and Bahrain, what would they be willing to do for a comprehensive peace agreement that would include Saudi Arabia and other major powers in the region?

Just before the signing ceremony, President Trump claimed that there were five or six other countries that will soon be ready to make similar agreements with Israel…

At least five or six countries are ready to make peace with Israel, President Donald Trump said at a press briefing alongside Prime Minister Benjamin Netanyahu ahead of the signing of the historic normalization between the Jewish state, the United Arab Emirates and Bahrain.

“We have many nations ready to follow” and make peace with Israel, the president said, adding that “at least five or six countries coming along very quickly.”

Many observers believe that Oman could be next, but the big one that everyone is watching is Saudi Arabia…

Several diplomatic sources have hinted that the Sultanate of Oman – which Netanyahu famously visited in 2018 – would be the next country to announce a normalization agreement with Israel. Oman’s leader spoke with Trump last week. Saudi Arabia, which allowed an Israeli and American delegation to cross its airspace in August for the first direct flight between Israel and the United Arab Emirates, is also said to be considering a warming of ties with Israel even though Saudi leaders have said publicly that they are not yet ready for full normalization.

I don’t expect any more major announcements before the U.S. presidential election in November, but once the election is over I anticipate that more efforts will be made to achieve “lasting peace” in the Middle East.

Eventually a Palestinian state will be formally established, and my new book explains some very specific things that will happen once that threshold is crossed.

Sadly, I don’t think that the Trump administration understands the danger in trying to create a Palestinian state, and if Joe Biden wins in November we can be assured that his new administration will push for a “negotiated solution” really hard.

One way or another, a Palestinian state is coming, and that is really, really bad news for all of us.