“Trayvon Martin”.  One need only say his name, or tweet it, and a frenzy of arguments, rebuttals and attacks either for or against him are sure to follow. 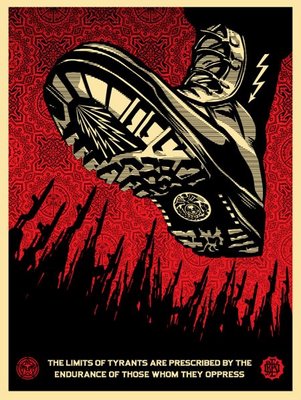 All revolutionary movements, all popular wars have been nourished by such propaganda of agitation. –Propaganda:The formation of men’s attitudes

The death of Trayvon Martin, a young 17 year old African-American has turned the nation into a giant battleground pitting White America against Black America. The media has been at every rally and interviewed everyone and anyone who has decided to have a say in this tragic event. While the dust is still settling, people in the media, the government, and in every chat room across the nation have been transformed into the judge, jury and executioner of Zimmerman, while people are also marching in protests wearing hoodies, and carrying skittles to show their support for the young Trayvon who is no longer alive due to the incident which is still at this time under investigation.

Recently, Representative Bobby Rush appeared on the House floor donning a grey hoodie and sunglasses to stand in support of Trayvon Martin and his family.

The New Black Panther Party has been interviewed by CNN, claiming they could arrest Zimmerman, the alleged shooter, saying they are authorized by the Constitution of the United States. In the same interview however, the Panther Leader stated that the black people of this country were not subject to the white man’s law. Subtle threats toward Zimmerman were alluded to by the leader of the Black Panther Party as well during the interview, but no condemnation by Rights groups, the President, or the White house has come out against the group as of this time.

Also coming out of the woodwork has been (or should I say ‘has-beens’) Al Sharpton and Jesse Jackson to get some more airtime in their fleeting careers as ‘activists’. Meanwhile the Obama administration is looking into this incident to see if they can declare it a “Hate Crime”. This is the report in part from The New American:

As race-hatred profiteers like Al Sharpton and Jesse Jackson whip up a frenzy of hysteria over a hypothetical racial element to the fatal shooting of Trayvon Martin in Florida last month, the Obama administration’s Justice Department is reportedly investigating whether or not shooter George Zimmerman can be federally prosecuted for a “hate crime.” And experts fear the situation is spiraling quickly out of control.

Even though more recent developments in the case have revealed that Zimmerman may be in fact justified in his action of defending himself from an assault by Trayvon, it seems this event will be used by the liberals, and the administration to carry out another tool of the tyrant called ‘propaganda of agitation’.

Propaganda of Agitation: A tool of Tyrants
Anyone who is not mesmerized by the hypnotic effects of the ‘boob tube’ can plainly see that America is headed down the slippery slope of economic decline, increasing debt, inflation, poverty, war, etc. Most Americans however, are sidetracked with their jobs, bills and TV and sports, etc. and are therefore oblivious to the crisis building up once again. Even if they are somewhat aware of events taking place around the world, they are only aware of the soundbite news clips fed them via the radio and TV news that is controlled and specifically chosen to keep them in a false paradigm of “recovery” and ” security” believing that the Federal Reserve, White House, and the TSA have everything under control because Lame stream media says so.

However, every so often the cat starts to get out of the bag, so to speak, and the masses start to become aware of their surroundings as the drunkenness of  media fantasy is replaced with the sobering hangover of everyday reality as gas and food prices climb and wealth decreases in front of their eyes.

This is where the propaganda of agitation agenda can be a great tool to the tyrant. As the people start to become focused and aware of their surroundings, they start to see that the ‘Emporer is not wearing clothes’ and so there must be a diversion to keep this from happening.

Usually the “sheeple” are only made aware of the King’s nakedness when someone who can plainly see it, points it out to others. This person then tends to become the ‘enemy of the king’ and therefore must be demonized, declared crazy, or put to eternal sleep (was this the case with Breitbart?) in order to keep the people from paying attention to the man behind the curtain, if you will.

Propaganda of agitation… generally attracts all the attention. It is most often subversive propaganda and has the stamp of opposition. It is led by a party seeking to destroy the government or the established order. It seeks rebellion or war. It has always had a place in the course of history. All revolutionary movements, all popular wars have been nourished by such propaganda of agitation. [1]

Governments can use this form of propaganda to rally the masses’ approval in illegal wars that would otherwise be abhorant to the people and otherwise unacceptable to a congress that would normally frown upon the cost of such an undertaking.

For example, when a government wants to galvanize energies to mobilize the entire nation for war, it will use a propaganda of agitation. At that moment the subversion is aimed at the enemy, whose strength must be destroyed by psychological as well as physical means, and whose force must be overcome by the vigor of one’s own nation. [1]

We can look back to the false flag event of 9/11 and the aftermath bombardment of media propaganda aimed at the masses in order to create hatred and hysteria against the ‘evildoers’ who were among the ‘Axis of Evil’. The lies told by our government, and supported by the brainwashing media did the trick that time and we sent our children to die in a foreign country like good pawns for the globalists.

Tyrants in history such as Mao, Lenin and Hitler used this form of propaganda to make sweeping reforms while crushing any obstacles in their “great leap forward”.

Governments also employ this propaganda of agitation when, after having been installed in power, they want to pursue a revolutionary course of action. Thus Lenin, having installed the Soviets, organized the agitprops and developed the long campaign of agitation in Russia to conquer resistance and crush the Kulaks. In such a case , subversion aims at the resistance of a segment or a class, and an internal enemy is chosen for attack.

Similarly, most of Hitler’s propaganda was propaganda of agitation. Hitler could work his sweeping social and economic transformations only by constant agitation, by overexcitement, by straining energies to the utmost. Nazism grew by successive waves of feverish enthusiasm and thus attained its revolutionary objectives.

On the current administration’s table of ‘Change’  are things such as U.S. Nuclear stock pile reduction which can put our country in a dangerous position against other countries, the health care takeover, a coming election wherein we could have Obama again for another four years, the NDAA, and executive orders that give the President powers to arrest, torture and even murder American citizens here and abroad. We have a debt ceiling that could again be reached before the elections, and a housing market that is still in shambles, as well as high unemployment stats (regardless of the spin being sold on tv) and record amounts of foodstamp recipients. If this isn’t a reason for Obama and his administration to foment the fires of agitation via propaganda I don’t know what is!

Obama and his administration currently are facing the whole birth certificate issue once again in full force. They thought they killed that issue with the release of the phony, ‘long form’ version of his birth certificate, but apparently not. They attempted to label “birthers’ as racists, crazy, and also as conspiracy theorists,  but with no success.

I believe this is one of the reasons for clinging to the recent shooting and death of a young black man. This gives the administration, the President, and the Left a reason and a catalyst to cause division and make conservatives, whites, and patriots all ‘enemies of the state’ and in turn rally support from blacks and liberal groups for the coming election where the “father” of Trayvon  (Obama said in a speech: “if I had a son, He’d look like Trayvon”)can once again be elected to continue transforming America.

The race card, as it is called, has been the tool used by our current administration since the globalist puppet Obama has been S-elected. I believe Obama was selected by the Elites because he is multi -ethnic and therefore appeals in a universal way to the masses. On the other hand, attacks against his policies can be redirected through agitating propaganda to make his opposition look racist.

In the Hegelian Dialectic, conflict is used to bring about change or resolution. That is why we are seeing so much ochestrated and controlled opposition between Democrat and Republican, Black and White, Liberal and Conservative, etc. The Oligarchs want to keep the masses stirred up in a frenzy of confusion and hate while they move us toward a tyrannical “Brave New World”, step by step.

It is time to turn our TVs off and our minds on again. The real issue at jeopardy is the life of our Country, the freedom of our children, and the morality of humanity in general.

Think about these words:

THE LIMITS OF TYRANTS ARE PRESCRIBED BY THE ENDURANCE OF THOSE WHOM THEY OPPRESS!!

Please wake up before it’s too late.