The federal government is continuing the incremental agenda to build a Ministry of Love styled detention camp system for the American people. According to a report from the Los Angeles Times, the Immigration and Customs Enforcement Agency or ICE is building three new detention camps in the United States. The detention facilities will be minimum-security residential facilities that the federal government says will be used to house illegal aliens. Considering that the majority of the American people are against illegal immigration and just want immigrants to come into the country legally, most people will believe that this is a reasonable step to solve the illegal immigration problem. Unfortunately, this is really nothing more than a phony solution to solve a problem that has been created by government policies that have been implemented to encourage the illegal alien problem. The federal government is using the illegal immigration problem as an excuse to build the detention camp apparatus that is really meant for the American people. This is pretty obvious considering Rex 84, the Army’s Civilian Inmate Labor Program, the preservation of detention camps for Japanese Americans used during World War II and additional detention facilities built by KBR. Building a series of detention facilities is not going to resolve the illegal immigration problem with an administration that has supported policies to ensure as many illegal aliens enter the country as possible. As the economy unravels and as more and more people begin to protest against this criminal government, the establishment will need these detention facilities to lock up large numbers of Americans.

Recently in Waterloo Iowa, the federal government through ICE and FEMA built a temporary detention facility on the National Cattle Congress fairgrounds to round up a group of illegal aliens working in the area. Rounding up a few hundred illegal aliens does absolutely nothing to reverse the long standing policies that created the illegal immigration problem in the first place. In fact, all they are doing to the illegal aliens they round up is to process them through their temporary FEMA camp. This is clearly not an effective way to stop illegal immigration. Under the guise of solving the illegal immigration issue they are simply having their people go through the motions in order to practice the deployment of a FEMA camp and the processing of live test subjects through the FEMA camp.

According to a report from Radar Magazine, top secret continuity of government operations includes a database called Main Core which contains a list of 8 million Americans. During a national emergency, people in this database could be arrested and detained by government authorities. In 2007, George W. Bush signed National Security Presidential Directive 51 which gives the president authority over all three branches of government during a catastrophic emergency. The Bush administration has also refused to reveal details on specific details of continuity of government operations to the U.S. House Homeland Security Committee. Perhaps the Main Core database and the plans to round up American citizens listed in this database during a national emergency is one of the reasons why they are keeping these details secret.

FEMA has also announced that they are expanding a program to transport a large number of American citizens using trains during an emergency. This is the same method that the Nazis used to transport large numbers of Jews and political dissidents to their death camps.

At the very least, the federal government is setting up some sort of Orwellian Ministry of Love system with these FEMA camps. In George Orwell’s book 1984, thought criminals were taken away to the Ministry of Love where they were re-educated to love Big Brother. These FEMA camps would serve as suitable places for the federal government to take away political dissidents and protesters. If Radar Magazine’s report on the Main Core database is accurate, this makes the possibility that these FEMA camps will be used for such a purpose quite real. Top this off with the fact that S 1959 the Homegrown Terrorism and Violent Radicalization Act of 2007 gives the federal government a blank check to establish various think tanks and commissions to study and target people who have certain belief systems under the guise of fighting terrorism and it becomes even scarier. The U.S. House of Representatives has already passed their version of the bill by a vote of 404-6. The U.S. Senate Homeland Security Committee has come out with a report suggesting that new legislation should be passed to deal with homegrown terrorism and the adoption of so called radical ideology. What better way to deal with people who have certain belief systems than to put them in FEMA camps that will be used for the purposes of re-education? It is no secret that the Bush administration has maintained a policy that endorses torture. The 81 page torture memo that was authored by former Deputy Attorney General John Yoo is proof that the administration sought to justify torture using the phony terror war as cover. There’s little doubt that they are attempting to socially engineer the general public to accept torture as an acceptable practice. If they are successful in doing this, they will undoubtedly utilize these practices in any sort of Ministry of Love styled re-education camp system.

These actions by the federal government should be of the utmost concern to the American people. The executive branch is being incredibly secret about continuity of government operations, there is legislation pending that will give the government a blank check to label particular belief systems as homegrown terrorism, the administration has written memos justifying the use of torture, they are maintaining a database of people who they’d round up during a national emergency and they are increasing the number of government run detention centers. As the economy continues to unravel and as more and more people become unhappy with the criminals and tyrants that have taken over the government, there is a very good chance that the ever growing martial law apparatus could be used on the people. This apparatus that they are setting up could be as bad if not worse than the Ministry of Love as depicted in George Orwell’s book 1984. 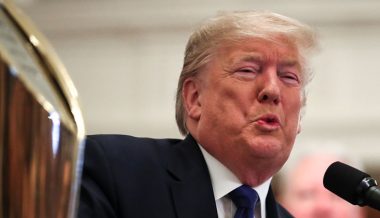