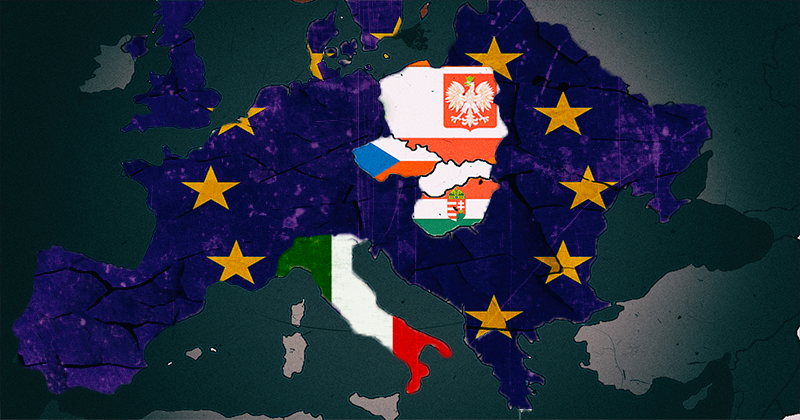 Europe is embroiled in an ideological civil war; the survival of the continent and all of its cultures hang by a thread.

Despite claims made by the American left, Europe is not the utopian manifestation of Karl Marx’s vision.

This fact is not only evinced by the innumerable examples of migrant rape gangs and truck attacks, but also the reactions of the citizens that are affected by these incidents.

Enforced victimhood and white guilt are going out of style, and nationalism is again on the rise among an increasing number of Europeans nations.

At the forefront of the battle against mandated demographic change, the Austrian government under Chancellor Sebastian Kurz has chosen to adopt a policy of what we in the US would call “Extreme Vetting.”

Under the new program migrants will be required to:

An integration program has also been created by the government requiring children to learn German or be expelled from school and penalizing adults if they refuse to learn the language.

Arguably the most important aspect of the program is the ban on foreign funding for religious organizations and the strict control the government retains over the curriculum of Islamic schools and preaching in mosques.

Such a strict program may offend our modern sensibilities on the subject of freedom of religion, but Islam as a hybrid, foreign religious/political system opposed to European forms of government is a reality all too familiar with Western peoples.

Since the writing of this article, Infowars Europe has reported that deportations are up 36% in the central European country.

In a joint statement with the leader of Hungary, Prime Minister Morawiecki of Poland made such statements as,

“Proposals by the EU that impose quotas on us hit the very foundations of national sovereignty.”

In a controversial move to distinguish itself as a Christian nation in an ever increasingly Islamic Europe, Poland held a prayer day on which tens of thousands of Christians stood on the border and prayed to commemorate the anniversary of a Christian victory over the Ottoman Turks.

Prime Minister Viktor Orbán famously erected a double razor-wire fence on Hungary’s border at the height of the migrant crisis, both to prevent illegal immigration into the country and to send a symbolic message to the EU that Hungary retains sovereignty over its borders.

The Hungarian leader has also styled his country as a bastion of Christianity which will stand against “Islamic expansion.”

In the aforementioned meeting with the Prime Minister of Poland, Orbán declared,

“We [Hungary] have hearts, we are a Christian people… but we can not help anyone if we destroy ourselves in the meantime.”

The countries listed here are only a few of those that have elected right-wing governments; however, many western European nations known for being far more liberal have come quite close to electing more conservative leadership.

Marine Le Pen made strong gains in the French elections, Geert Wilders’ Freedom Party had a sizable following in the Netherlands, Angela Merkel may be removed from office if Germany doesn’t address its migrant problem, Italy has formed a populist government, and the UK is exiting the European Union.

The tide is slowly turning against globalism and world government, but the fight is more important than ever because as seen in the UK with Tommy Robinson, tyranny will spare no victims in the meantime.