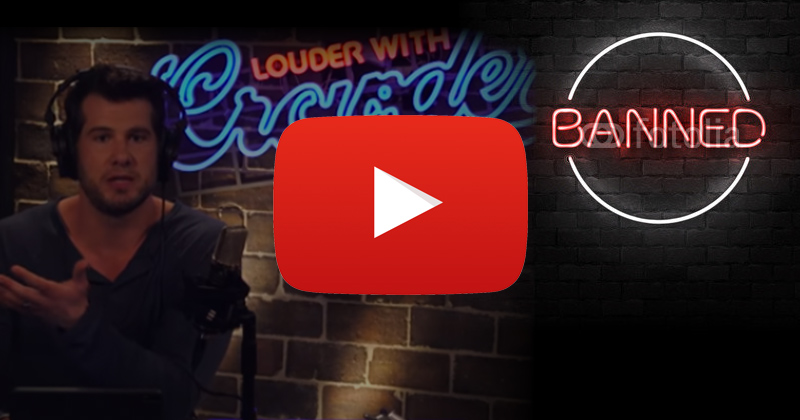 YouTube announced it has demonetized the channel of conservative commentator Steven Crowder, days after a Vox editor accused the comedian of harassment.

The company made the announcement in response to a Twitter thread created by Vox editor Carlos Maza, which accused Crowder of targeted harassment and causing him mental anguish.

Since I started working at Vox, Steven Crowder has been making video after video "debunking" Strikethrough. Every single video has included repeated, overt attacks on my sexual orientation and ethnicity. Here's a sample: pic.twitter.com/UReCcQ2Elj

“Update on our continued review–we have suspended this channel’s monetization,” @TeamYouTube wrote Wednesday in response to Maza’s thread. “We came to this decision because a pattern of egregious actions has harmed the broader community and is against our YouTube Partner Program policies.”

Update on our continued review–we have suspended this channel’s monetization. We came to this decision because a pattern of egregious actions has harmed the broader community and is against our YouTube Partner Program policies. More here: https://t.co/VmOce5nbGy

Hours earlier, YouTube had claimed it would take no action against Crowder’s channel.

(3/4) As an open platform, it’s crucial for us to allow everyone–from creators to journalists to late-night TV hosts–to express their opinions w/in the scope of our policies. Opinions can be deeply offensive, but if they don’t violate our policies, they’ll remain on our site.

While they barred the former Fox News contributor from making money off his channel, YouTube did not move to ban the channel outright.

Crowder pointed to videos of Steven Colbert, Samantha Bee and others making fun of President Trump as an example of YouTube’s double standard.

.@TeamYouTube made the right decision. If they banned us, they'd have to ban.. pic.twitter.com/hyNK3PhhHU

But Maza didn’t stop there.

After YouTube announced it would demonetize Crowder, Maza again complained arguing that most of Crowder’s revenue came from t-shirt sales not YouTube monetization: “So the fuck what. Basically all political content gets “demonetized.”

To which YouTube ordered Crowder would “need to remove the link to his T-shirts” in order to have his monetization re-instated.

To clarify, in order to reinstate monetization on this channel, he will need to remove the link to his T-shirts.

In tweets Wednesday, Crowder said he’d spoken with YouTube and had indeed confirmed a massive culling of independent YouTube creators was about to take place.

Just spoke with YouTube. Confirmed, the second Adpocalypse IS here and they’re coming for you. More details to follow. Stay tuned.

We have details in incoming video, but YouTube and Vox have launched an all out WAR on ALL independent creators. Thousands of channels under review!

PLEASE TWEET us if you’ve been demonetized under the new #VoxAdpocalypse guidelines! Will be discussing in tonight’s show.

“Just spoke with YouTube. Confirmed, the second Adpocalypse IS here and they’re coming for you,” Crowder wrote. “More details to follow. Stay tuned.”

On Wednesday, YouTube announced a change to its community guidelines affecting channels on the platform which they say “incite hatred, harassment, discrimination and violence.”