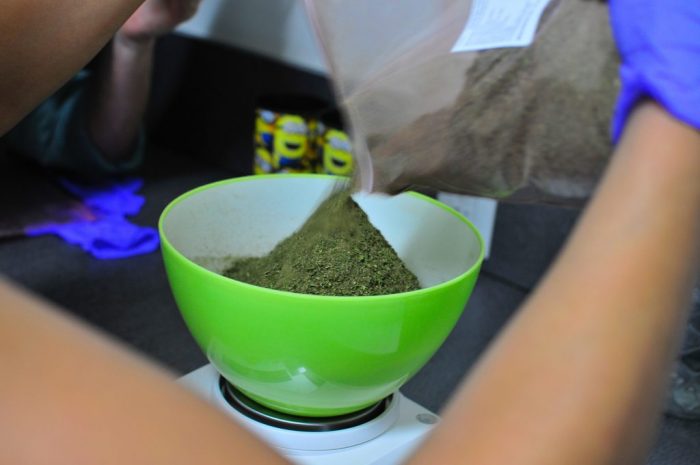 Researchers are finally studying the medicinal effects of marijuana after many years of marijuana advocates begging and pleading for science to investigate what they already knew – that the plant has the power to ease seizures, help people sleep, and much more. But scientists aren’t studying the stuff you can buy on the street or in dispensaries, so can we trust their conclusions?

All it takes is a quick glance at the photo above to realize that scientists are using…well, crap…in their studies. And it’s not their fault; this is the schwag the government provides. It’s full of leaves and stems, it’s lighter in color, and it’s stringy. It’s almost like the government is afraid to give ’em the real stuff. [1]

Scientists are starting to get a little angry about the quality of cannabis they’re being forced to use. You can’t study medical-quality marijuana if you’re being provided with what looks like a bag of oregano.

Sue Sisley is a researcher who has just embarked on a first-of-its-kind clinical trial of government medical marijuana for military veterans suffering with PTSD. The study has its difficulties. Sisley says she once got a batch of federal marijuana that resembled green talcum powder.

She’s not the only one who thinks government weed is a joke. Jake Browne, a cannabis critic for the Denver Post’s Cannabist marijuana news site, says:

Browne, who has reviewed dozens of strains professionally, adds:

“In two decades of smoking weed, I’ve never seen anything that looks like that. People typically smoke the flower of the plant, but here you can clearly see stems and leaves in there as well, parts that should be discarded. Inhaling that would be like eating an apple, including the seeds inside it and the branch it grew on.” [1]

It’s unlikely also that Sisley just got a bad batch.

The University of Mississippi is the only facility permitted to grow federal marijuana. The program is overseen by the National Institute on Drug Abuse (NIDA), so it all comes from one place. Last summer, the DEA formally took steps to allow other entities to supply marijuana for research purposes, but so far none have been approved.

The potency of marijuana grown at the university tops out at 13% THC, but Sisley’s testing revealed that one of NIDA’s strains that was allegedly 13% THC was actually only 8%. The typical commercial weed available in Colorado is about 19% THC. Some higher-end strains can reach 30% or more.

How do you study whiskey when all you have is Mike’s Hard Lemonade? Crappy weed is OK if you’re using it to study how marijuana affects the body in a lab setting, but you can’t use NIDA weed to find out how the plant affects people in the real world. It doesn’t work in highly controlled medical experiments either. So says Rick Doblin, founding director of the Multidisciplinary Association for Psychedelic Studies (MAPS), a group that’s been working with Sisley on the PTSD trial.

Potency is only one of the problems being encountered by researchers. Remember the batch of government weed Sisley got that resembled green talcum powder? Well, some of the samples tested positive for mold. [2]

The government allows only one source of marijuana for clinical research in the United States; and “they weren’t able to produce what we were asking for,” Sisley says.

Sisley and her colleagues were finally able to enroll their first trial subjects, but it took 4 months and 3 rounds of testing after the initial delivery of bad weed. Mold can be dangerous, after all, particularly in people with mold allergies and in people with compromised immune systems. In fact, immunocompromised people were excluded from Sisley’s study.

Doblin says that this recent episode:

“…shows that NIDA is completely inadequate as a source of marijuana for drug development research.” [2]

“They’re in no way capable of assuming the rights and responsibilities for handling a drug that we’re hoping to be approved by the FDA as prescription medicine.”

“…if you’re trying to do a study where you imitate what patients do in the real world, you can’t.”