Tur grabbed Shapiro around the neck before telling him, “If you don’t cut that out, you’ll be going home in an ambulance.”

After the taping, Tur continued the threatening tirade, telling Shapiro, “I’ll see you in the parking lot.”

Tur then doubled down further, indirectly threatening to “curb stomp” Shapiro. He also retweeted someone who advocated punching Shapiro in the face.

In a subsequent radio interview, Tur admitted he was threatening Shapiro during the debate, before going on an anti-Semitic rant in which he claimed that Judaism was “misogynistic cult” which doesn’t allow women to touch men.

In a Twitter exchange with me, Tur then claimed that he was the one under attack.

Whether Zoey Tur has a penis or not, he behaved like a total dick.

Tur’s conduct was that of a repugnant authoritarian bully, and no amount of self-ascribed victimhood status is going to change that fact.

Why does the left get away with demonizing their political adversaries as hateful, intolerant and violent – when it’s leftists themselves who are the most threatening, intolerant and censorious people in the field of public discourse?

Aside of course from radical jihadists, the most violent and intolerant people on the planet, whom the left makes apologies for as they stone women to death and throw gays off buildings.

I’m not even that much of a public figure but I get death threats from leftists every week. Feminists threatening to behead me. Muslims saying I “will be killed” for daring to draw attention to violent passages in the Koran.

When Chuck Johnson said he was planning to politically take out (ie write a hit piece on) Black Lives Matter activist DeRay McKesson, he was instantly banned from Twitter and widely reviled by the leftist media.

So how did the left react to Tur’s direct threat of violence towards Shapiro? They celebrated it and then attacked Shapiro after he filed a police report for assault.

Raw Story lauded Shapiro’s humiliation. Salon blamed Shapiro for provoking Tur and then labeled him a coward. Crooks and Liars called Shapiro a twerp and accused him of inciting Tur.

Isn’t it funny how leftists constantly berate those on the right for victim blaming, yet rush to victim blame when the victim’s not a liberal?

Imagine if this had been the other way around. Imagine if Bill O’Reilly had physically grabbed and violently threatened Caitlyn Jenner. Do you think the left would have dismissed it as no big deal?

And isn’t it interesting that while constantly proclaiming herself to be female, Zoey Tur suddenly discovered her natural innate caveman?

As Steven Crowder writes, “Nothing screams, “I AM WOMAN!” quite like the utterly manly response of physically attacking someone who pissed you off.” How very feminine…..

If there’s one thing that leftists hate most, it’s being called out on their rampant and unbridled hypocrisy.

That’s why, instead of swallowing their pride and accepting that Tur’s behavior was unacceptable, they’ve rallied round him and made out Shapiro to be the villain.

All this illustrates that the left doesn’t believe in equality. They think that by ascribing themselves special victimhood status, that gives them a free pass to engage in hate, violence and intolerance – while lecturing us about how hateful, violent and intolerant we are simply for challenging their views.

Well this time, it blew up in their face. 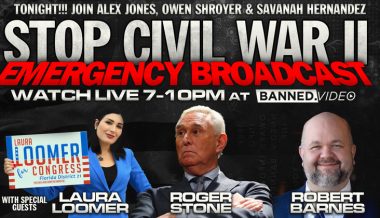