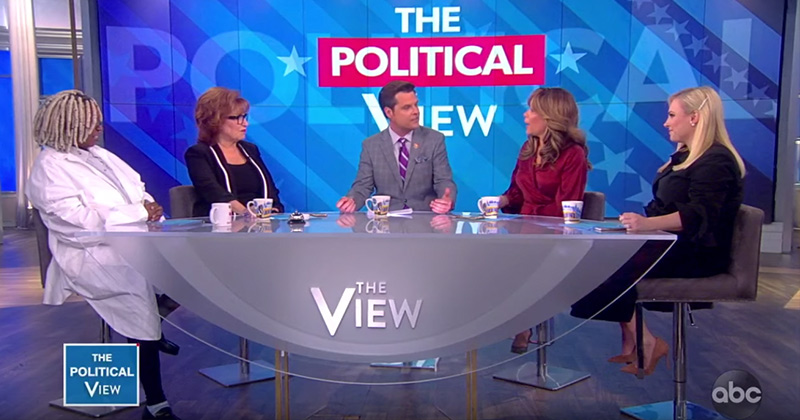 In retrospect, the hosts of The View likely wish they never brought Rep. Matt Gaetz, (R-Fla.) onto their set, because the GOP congressman completely destroyed the group of establishment gossipers Thursday.

Right off the bat, Gaetz came out swinging, asking Joy Behar if she was “wearing black as a consequence of, like, the death of the political left in the debate last night.”

“Don’t count the dead yet, the bodies,” Behar replied. “Let’s give it a little time.”

“Joe Biden at least,” Gaetz continued. “I was hoping that maybe Whoopi’s bell could wake up the Biden campaign.”

Behar responded by saying she didn’t think Biden did anything to hurt his candidacy during the debate.

“What state is he going to win?” Gaetz asked. “The fundamental premise of the Biden campaign is that he’s ‘electable,’ but he can’t seem to win elections.”

After stating Biden has little to no chance of winning the Democratic nomination, Gaetz moved on to say the ticket has become “socialist Bernie Sanders against billionaire Michael Bloomberg.”

The conversation then drifted to Trump’s appointment of Richard Grenell as the acting director of national intelligence, to which Gaetz argued Grenell is well-qualified.

Next, Sunny Hostin asked Gaetz if he thinks President Trump should pardon Roger Stone and his response triggered RINO “conservative” Meghan McCain even more than her liberal co-hosts.

“Oh, come on congressman!” she shrieked after Gaetz stated, “I do.”

“Bill Clinton pardoned sixteen people who were members of a Puerto Rican terrorist organization that planned murders at the Fraunces Tavern here in The United States,” Gaetz lectured the hosts.

In 2017, President Barack Obama also commuted the federal prison sentence of one of the group’s bombmakers Oscar López Rivera so he could then march alongside communist NYC Mayor Bill de Blasio.

The GOP congressman responded by saying if they cared about presidents cheating on their spouses they’d have impeached Bill Clinton.

“They did,” the group simultaneously blurted out before Gaetz quipped, “Not with all of you waving any pom-poms.”

Saying he wanted to answer McCain’s question of how people can support Trump, Gaetz explained POTUS is a “comeback president running against the throwback left and the Venezuela wing of the Democratic party taking over with Bernie Sanders.”

“He praises Venezuela, he praises Cuba and I don’t want that for our great country,” Gaetz declared, concluding the interview.