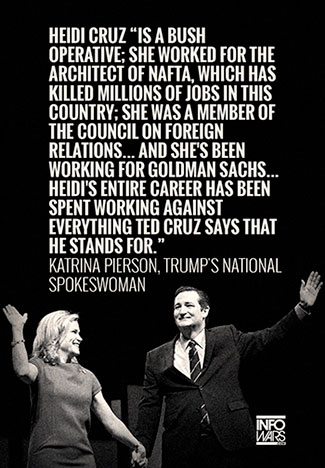 CNN and the corporate media are chewing up a lot of airtime over the tweet spat between the Trump and Cruz campaigns.

On Tuesday, the Trump campaign said its counter-tweet to one sent out by a PAC associated with Cruz is not an attack own the Texas senator. The PAC had posted a photo of a naked Melania Trump and the Trump campaign responded with an unflattering photo of Heidi Cruz.

“Well, of course not. Mr. Trump didn’t make the picture. He retweeted a tweet because he said his wife is beautiful just the way that she is,” said Katrina Pierson, Trump’s national spokeswoman, during an interview with CNN’s Don Lemon. “And since when did it become OK to attack a woman? What is the policy here? Is it OK to attack a woman, malign her character, impugn her dignity just because she’s beautiful?”

If Donald Trump is indeed the anti-establishment candidate, it would have served his campaign better to dismiss the tweet and concentrate on the real problem with Heidi Cruz—she is a bankster elite insider.

Pierson did, in fact, touch on this earlier.

“Spilling the beans is quite simple when it comes to Heidi Cruz. She is a [George W.] Bush operative; she worked for the architect of NAFTA, which has killed millions of jobs in this country; she was a member of the Council on Foreign Relations who—in Sen. Cruz’s own words, called ‘a nest of snakes that seeks to undermine national sovereignty’; and she’s been working for Goldman Sachs, the same global bank that Ted Cruz left off of his financial disclosure. Heidi’s entire career has been spent working against everything Ted Cruz says that he stands for.”

Ted Cruz is a faux tea party conservative. He exploited the movement to fool voters and draw in supporters who would then be victimized and betrayed.

Heidi Cruz sat on the CFR-sponsored Independent Task Force on the Future of North America in 2004. A report produced by the Task Force in 2005 lists Cruz as a member and describes her as “an energy investment banker with Merrill Lynch in Houston, Texas” who “served in the Bush White House under Dr. Condoleezza Rice as the Economic Director for the Western Hemisphere at the National Security Council, as the Director of the Latin America Office at the U.S. Treasury Department, and as Special Assistant to Ambassador Robert B. Zoellick, U.S. Trade Representative.”

Additionally, she is currently head of the Southwest Region in the Investment Management Division of Goldman, Sachs & Co.

“I support the Task Force report and its recommendations aimed at building a safer and more prosperous North America,” Cruz wrote. “Economic prosperity and a world safe from terrorism and other security threats are no doubt inextricably linked. While governments play an invaluable role in both regards, we must emphasize the imperative that economic investment be led and perpetuated by the private sector. There is no force proven like the market for aligning incentives, sourcing capital, and producing results like financial markets and profit-making businesses. This is simply necessary to sustain a higher living standard for the poorest among us—truly the measure of our success. As such, investment funds and financing mechanisms should be deemed attractive instruments by those committing the capital and should only be developed in conjunction with market participants.”

All we need to do is look at NAFTA—signed into law by Hillary Clinton’s husband—to understand how the “incentive” of “free markets” and “financing mechanisms” have lowered the living standards of Americans and how the “path to legal status for undocumented workers” (as Ted calls it) will further erode the middle class.

The globalist plan to destroy American and turn it into a third world feudal wasteland should be a daily mantra for the Trump campaign.