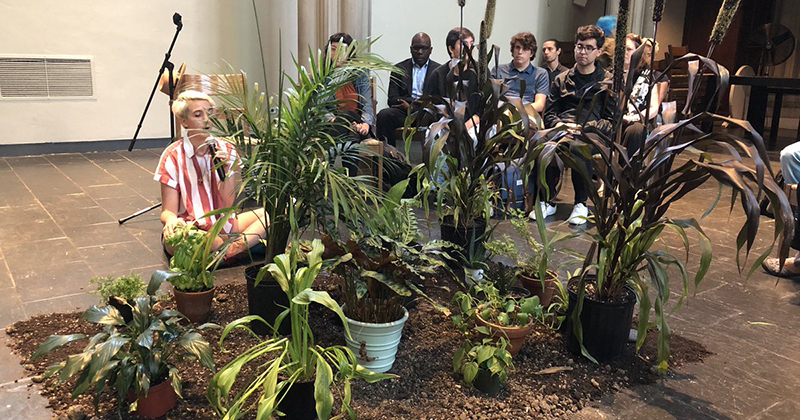 The folks at Union Theological Seminary are taking the concept of “talking to your plants” to a frightening new level.

Each year, students at the seminary pay a ridiculous amount of money to go to the school, and they are there to be trained to be the Christian leaders of tomorrow.  But instead, they are being taught to confess their “climate sins” to potted plants, and eventually these impressionable young minds will be leading churches and Christian institutions all over America.  I realize that this story is so bizarre that it sounds like somebody made it up, but it is actually true.  The following was posted by the official Twitter account of Union Theological Seminary last week…

Today in chapel, we confessed to plants. Together, we held our grief, joy, regret, hope, guilt and sorrow in prayer; offering them to the beings who sustain us but whose gift we too often fail to honor.

What do you confess to the plants in your life?

Today in chapel, we confessed to plants. Together, we held our grief, joy, regret, hope, guilt and sorrow in prayer; offering them to the beings who sustain us but whose gift we too often fail to honor.

What do you confess to the plants in your life? pic.twitter.com/tEs3Vm8oU4

Needless to say, this tweet got a tremendous amount of attention, and the following are some of the more interesting responses…

–Those plants think you’re all morons.

–“They exchanged the truth about God for a lie, and worshiped and served created things rather than the Creator …” — Romans 1:25

–How every day, there’s a match and lighter fluid within 5 steps of them

–My confession: I am judgmental toward Larry the cucumber for exercising green privilege over Bob the tomato.

Of course a lot of very confused parents probably contacted the school as well, because this was definitely not what most of them had in mind when they heard that their child was going to attend “seminary”.

But instead of backing down, Union Theological Seminary posted a ten part response on Twitter in which they defended this new practice.  The following are the first five parts of their response…

We’ve had many questions about yesterday’s chapel, conducted as part of @ccarvalhaes’ class, “Extractivism: A Ritual/Liturgical Response.” In worship, our community confessed the harm we’ve done to plants, speaking directly in repentance.

This is a beautiful ritual. /1

We are in the throes of a climate emergency, a crisis created by humanity’s arrogance, our disregard for Creation.

Far too often, we see the natural world only as resources to be extracted for our use, not divinely created in their own right—worthy of honor, thanks and care. /2

We need to unlearn habits of sin and death. And part of that work must be building new bridges to the natural world.

And that means creating new spiritual and intellectual frameworks by which we understand and relate to the plants and animals with whom we share the planet. /3

Churches have a huge role to play in this endeavor. Theologies that encourage humans to dominate and master the Earth have played a deplorable role in degrading God’s creation.

We must birth new theology, new liturgy to heal and sow, replacing ones that reap and destroy. /4

When Robin Wall Kimmerer spoke at Union last year, she concluded her lecture by tasking us—and all faith communities—to develop new liturgies by which to mourn, grieve, heal and change in response to our climate emergency.

We couldn’t be prouder to participate in this work. /5

Without a doubt, humanity is destroying the planet.  In fact, I just wrote an entire article in which I discussed the fact that nearly 30 percent of all birds in North America have been wiped out since 1970.  But the theory that if we just pull enough carbon dioxide out of the air that everything is going to be okay again is absolutely ludicrous.

Plants need carbon dioxide, and scientists tell us that there have been times in the history of the planet when the levels of carbon dioxide in our atmosphere were far, far higher than they are today.  During those times, life on our planet greatly thrived.

So instead of “confessing their climate sins”, what those students at Union Theological Seminary should really be doing is apologizing to those poor wilting plants for trying to take their carbon dioxide away.

And Union Theological Seminary is not the only one promoting this sort of wackiness.  In fact, NBC News recently put up an entire page where people are being encouraged to confess their climate sins…

Even those who care deeply about the planet’s future can slip up now and then. Tell us: Where do you fall short in preventing climate change? Do you blast the A/C? Throw out half your lunch? Grill a steak every week? Share your anonymous confession with NBC News.

So what exactly does a “climate sin” look like?

-As ‘green’ as I try to be, I print all my documents at work because I’m better able to edit that way vs. on a computer screen.

-I work less than two miles from where I live. I drive to work nearly every single day.

-I can live without many things to help our planet, but I must draw the line at air conditioning. I would wilt!

-I have a mobile boarding pass, still I get to the airport and run to a printing machine… paper makes me feel safe, and I’m sorry

-I use a lot of Q-tips, I can’t find a better alternative.

Sadly, our world is getting stranger with each passing day.  The people running things appear to be completely losing it, and meanwhile those that offer common sense solutions to our problems are being completely shunned.

I know that a group of theology students “confessing their climate sins” to a bunch of potted plants is not one of the biggest issues that we are facing, but it is emblematic of a larger trend.

At this point our entire education system from top to bottom is swirling down the tubes, and things just get worse with each passing year.