Okay.  It’s time somebody says it. Something seems very strange about the GOP primary pre-polling and vote thus far.

As a Ron Paul fan, I didn’t want to seem like a sore loser after the odd Iowa result where the failed no-name Senator, Rick Santorum, was catapulted to victory with very little tangible support.

But now, how on earth could Newt Gingrich win the South Carolina primary when the day before the vote he had to cancel a major campaign stop because of lack of attendance?

Newt Gingrich has cancelled a campaign appearance in South Carolina because of poor attendance.

The Republican presidential candidate was scheduled to speak to the Southern Republican Leadership on Friday. But a campaign spokesman told reporters that he would no longer be appearing due to poor attendance.

There were just a few dozen people in the audience at the College of Charleston’s arena, where the event was taking place.

Meanwhile, on the same day Ron Paul boasted over 1000 attendees at his campaign event in Charleston:

The crowd gathered expressly for the 12-term Congressman from Texas as he participated in “The Bully Pulpit Series” at 11:00 a.m. EST at the College of Charleston, located at 7 College Way, Charleston. The candidate had been in Washington the day prior for a key House vote against President Obama raising the debt ceiling, but upon his return there was apparently no loss of enthusiasm. 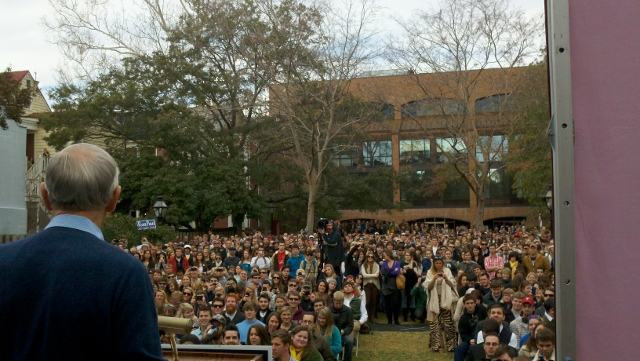 Primary elections are traditionally driven by enthusiasm.  In other words, the average voter does not turn out for primaries unless they are motivated by a certain candidate.  So, could someone please explain to me how Newt Gingrich, who has virtually no ground game, no money, and no fervent supporters, just won the South Carolina primary?

Could the conspiracy to keep Ron Paul out of the Oval Office be this coordinated, this pervasive?