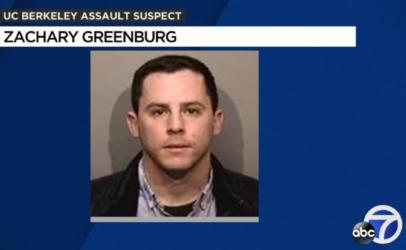 UC-Berkeley said Friday that it has arrested the suspect in the recent violent attack against a conservative on campus.

The school identified the suspect as Zachary Greenberg. This is the first time that UC-Berkeley has publicly named the suspect who on Feb. 19 was caught on video punching Hayden Williams, a conservative and employee of Campus Reform’s parent organization, in the face. At the time, Williams was helping conservative groups recruit new members.

“Today, an Alameda County Superior Court Judge issued a warrant for the arrest of the suspect in the matter involving a February 19 assault on Sproul Plaza. Zachary Greenberg was arrested by the University of California Police Department (UCPD) on the warrant and booked into jail at 1 p.m. UCPD will formally present the case to the Alameda County District Attorney’s Office for consideration of the filing of criminal charges. Once the matter is presented and reviewed by the District Attorney’s Office, additional information will be made available regarding a charging decision,” UC-Berkeley said in a statement Friday.

According to information obtained from Alameda County public records, Greenberg is 28 years old. He was booked into the Glenn Dyer Detention Facility in Oakland, California at 2:27 p.m. local time on Friday. Greenberg’s arraignment is scheduled for Monday at 9 a.m. local time. His bail was set at $30,000. Jail records show that Greenberg was charged under California Penal Code 245(A)(4) F, which is classified under assault and battery.

According to one section of the code, “any person who commits an assault upon the person of another by any means of force likely to produce great bodily injury shall be punished by imprisonment in the state prison for two, three, or four years, or in a county jail for not exceeding one year, or by a fine not exceeding ten thousand dollars ($10,000), or by both the fine and imprisonment.”

Williams reacted to the new developments in a statement to Campus Reform:

I am grateful to the University of California Berkeley Police Department for its dedication to identifying and arresting the man who attacked me. But while this is a moment for celebration, I remain disappointed by the UC Berkeley Administration, which allowed a culture of intolerance and violence toward conservatives to grow. I hope UC Berkeley’s leadership will seize on this moment-in-time to take deliberate steps to establish a zero tolerance policy when it comes to violence, and restore Berkeley’s legacy as ‘Home of the Free Speech Movement.’

“I have retained an attorney and I will follow her counsel on next steps,” Williams told Campus Reform.

“On Friday, March 1, the University of California Berkley Police Department arrested the man who violently assaulted one of our employees, Hayden Williams, on the University of California-Berkeley campus while he was working to recruit conservative student leaders in his capacity as Field Representative for The Leadership Institute. Hayden has retained an attorney and we stand with him as he pursues legal action against his attacker. Holding this attacker accountable by pursuing legal action is a step toward protecting free speech for conservatives on college campuses across the country. Conservatives have a right to free speech and shouldn’t be attacked for it – on or off college campuses.

The Leadership Institute applauds the University of California Berkley Police for their dedication to identifying and arresting the attacker but calls on the University of California-Berkeley and higher education campuses across the country to take steps to reverse the culture that has allowed for violent attacks against conservatives. Violence should never be tolerated in response to students who exercise their right to free speech.”

Berkeley is no stranger to anti-conservative violence. During a number of violent riots that broke out in early 2017 in response to appearances by several conservative speakers such as Milo Yiannopolous, a Diablo Valley College ethics professor named Eric Clanton smashed at least one person upside the head with a bike lock.

Clanton later took a plea deal which entailed the dropping of all three felony charges against him.

Another rioter sprayed Trump supporter Kiara Robles in the face with pepper spray for wearing a hat that read, “Make Bitcoin Great Again.”

Mike Adams joins Owen Shroyer live via Skype to break down an array of news stories including the push to censor nutritional / health information by big tech, medical fascism, 3-D printed gun technology, and how some feminists are calling for abortion to be an option for women after an undetermined amount of time following the birth. It could be days, weeks, or even months after the successful delivery that the mother “chooses” to abort the infant.