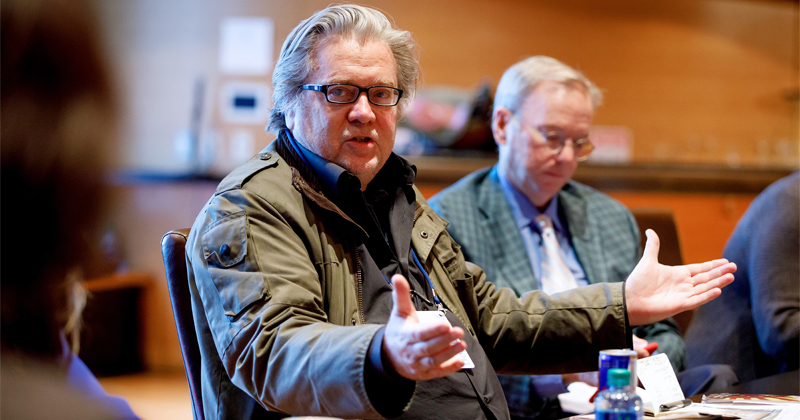 Steve Bannon slammed China for its role in the Coronavirus outbreak, adding the country owes “trillions, if not tens of trillions” of dollars in damages.

The former White House chief strategist said the Chinese Communist Party is “directly responsible” due to lying about the nature of the virus during the early stages of the spread and is guilty of hoarding personal protective equipment (PPE) of several countries right before the crisis.

“The Chinese Communist Party is going to have to pay,” Bannon said on CNBC Thursday. “The world is going to hold them in judgment and the judgment is not going to be very pretty.”

“They owe trillions, if not tens of trillions of dollars.”

“We’ve got 30 million people unemployed, you have hundreds of thousands of people around the world dead,” said Bannon. “You have economic carnage everywhere.”

“Remember, it’s not just the cash we put in, it’s the opportunity cost of what we’ve had to forgo.”

He emphasized that the current degree of comeuppance China deserves was independent of reports of the country’s bioweapons activity, but instead strictly tied to the communist party’s handling of the crisis.

“There’ll be full investigations of that.”

He went on to point that the World Health Organization was instrumental in facilitating China’s narrative back in January at a time when the rest of the world could have made effective maneuvers to protect themselves.

“We know for a fact they knew they had human transmission and community spread in mid to late December, they knew this and they lied,” he said. “They had the World Health Organization come out on the 14th of January to put out a tweet saying ‘after consultation with senior members of the Chinese government, the Chinese Communist Party told us there’s no human to human transmission.’”

“These are bald-faced lies.”

“We’re coming up with a very distinct recommendation. But we’re not happy with it,” Trump said Wednesday in the Oval Office. “There’s nothing positive about what happened in China having to do with this subject.”

“Nothing positive at all.”

As of this writing, over 3.2 million people have been infected with Covid-19, according to Johns Hopkins University.