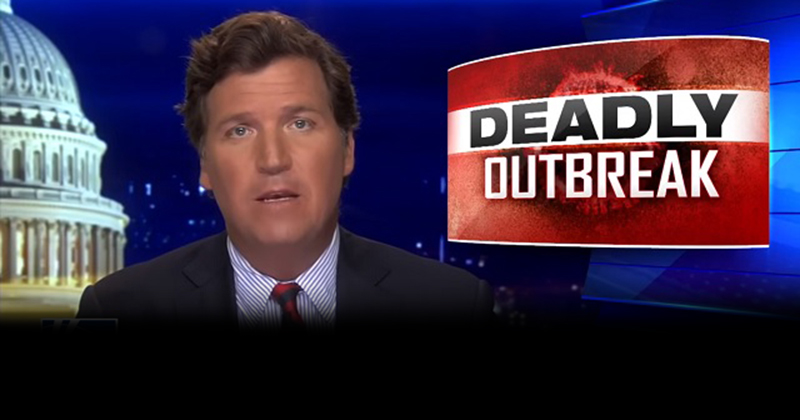 Is globalism and open borders going to get millions killed in a global pandemic?

For weeks now, our managerial class couldn’t care less. Instead, their focus was on fears of a potential “racist” backlash against Chinese people being unfairly “stigmatized” for spreading an exotic virus that may have come from eating exotic dishes like bat soup.

“Identity politics trumped public health and not for the first time,” Tucker Carlson said on his show Monday night after highlighting this insane dichotomy. “Wokeness is a cult. They’d let you die before they admitted that diversity is not our strength.”

Thousands of people have traveled from China to America since the outbreak of the coronavirus and just a sliver were screened:

"Wokeness is a cult, they'd let you die before they admitted that diversity is not our strength."

Tom and Pete take a look at the horrific case of Tessa Major’s death and the ‘Diversity’ mob that was behind it.

It's unacceptable that Italy must suffer #coronavirus problems due to stupid left politics made by the 5 Stelle – PD government, who accused all the people that warned italians about the importance of #COVID19 of being racists.#COVID19italia #amuchina #coronavirusitalla #Italia

Despite championing closed borders and travel bans during his campaign, Trump “monitored” the situation until the end of January (presumably out of fear dramatic action would hurt the stock market) and let a bunch of flights from Wuhan into the country with just a 14 day quarantine.

Many of the folks allowed to return to the US complained that they weren’t being given follow-up tests for the virus, which has an incubation period pushing 27 or so days (one case allegedly took 34 days and another 94 days).

It was reported over the weekend that President Trump was “furious” that the State Department under Mike Pompeo apparently overruled the CDC’s objections and OK’d bringing 14 Americans infected with the coronavirus back to the US.

As The Daily Mail reported Saturday:

President Donald Trump is reportedly furious after underlings at the State Department decided to fly 14 Diamond Princess passengers who tested positive for coronavirus back to the U.S. without telling him, and against his wishes.

Trump had been told last Saturday that only evacuees who didn’t have symptoms or positive test results would be allowed on State Department charter planes back to the US from Japan, according to the Washington Post.

Officials on the ground realized late in the evacuation process, on the airport tarmac in Tokyo, that 14 of the roughly 350 evacuees had tested positive for the virus.

State Department underlings made the quick decision to allow the infected citizens onto the flights, but separated from the other passengers within portable bio-containment units that were already on the planes, in case passengers showed symptoms during the flight.

Some members of the coronavirus task force back in Washington were not told in advance that the infected people would be placed on the plane, and learned about it only after the plane was on its way back to the U.S.

One senior White House official said not informing Trump of the decision ahead of time was a ‘big operational mistake.’

They were going to be taken to a FEMA center in Anniston, Alabama but the plans were canceled after state officials balked at the idea:

.@realDonaldTrump called to assure me that this plan will not move forward. I thanked him for his support of AL! We always want to help our fellow Americans, but this wasn’t fully vetted. Thank you @SenShelby @RepMikeRogersAL for advocating on our behalf! #alpolitics #teamwork https://t.co/fzpaBmJOtW

It hasn’t been announced where they’re going to be taken.

California asked some 7,600 people “who returned to the state after visiting China during the outbreak of the new virus” to voluntarily self-quarantine themselves at home for a month, the AP reported on Friday.

Multiple states put out similar requests for travelers returning from China to “self quarantine.”

Amid #coronavirus, U.S. Cities stretch to monitor self-quarantined Americans. More than 5,400 people had been asked to self-quarantine in California alone, according to the California Deparment of Public Health. Hundreds more in GA, WA, IL and New York. https://t.co/gkRhWS4Mr0

On Monday, the stock market fell 1031 points with fears of a global economic slowdown due to the coronavirus being blamed.

No need to worry though folks, Trump says the coronavirus “is very much under control in the USA” and the Stock Market is “starting to look very good to me!”

The Coronavirus is very much under control in the USA. We are in contact with everyone and all relevant countries. CDC & World Health have been working hard and very smart. Stock Market starting to look very good to me!

The White House on Monday night requested $2.5 billion in funds to fight the coronavirus with $1 billion going towards developing a wild shot vaccine.

That $1 billion would probably be better spent on ramping up the production of face maskswhich are in extremely short supply.

I can’t help but think all of this could have been prevented if Trump simply followed through on his campaign rhetoric and announced in December a complete and total shutdown of Chinese immigration until we can figure out what the hell is going on!